Singleton addresses the inner workings of the region's largest homelessness agency and the public's misgivings about its output. 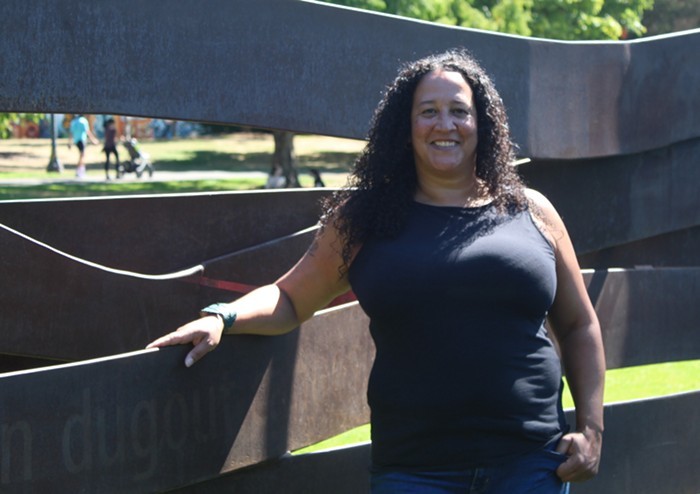 Shannon Singleton, the interim director of the Joint Office of Homeless Services (which will be referred to as both JOHS and the Joint Office in this story), announced earlier this month that she would be stepping down from her temporary role to join Espousal Strategies, a public affairs firm that consults government agencies, organizations, and other clients on lobbying work, campaign strategies, and civic engagement.

Singleton, a trained social worker, had a brief six months at the helm of the JOHS, the region's largest government agency dedicated to addressing homelessness, but she has a long history in working to address homelessness at the local and statewide level. Prior to joining JOHS in March, Singleton worked as the director of homeless advocacy nonprofit JOIN, oversaw the Salvation Army women's shelter, and served as a program manager for both Cascadia Behavioral Healthcare and the Portland Housing Bureau. Most recently, Singleton worked as Governor Kate Brown's director of equity and racial justice and considered a run for Multnomah County Chair.

Singleton's last day at JOHS is Wednesday. Her departure comes as members of Portland City Council—including Mayor Ted Wheeler—work to cut funding from JOHS, an agency which the city oversees in tandem with Multnomah County. Several on City Council have expressed their frustration with the perceived slowness at which the JOHS is addressing visible homelessness in the region, a concern that drove council to pass a policy earlier this month that would ban unsheltered homelessness by 2024.

With Singleton's significant background in this area of work, we wanted to hear her perspective on the inner workings of JOHS and what may be misunderstood about how the region is addressing one of its most entrenched issues. Here's our conversation:

MERCURY: What influenced your decision not to seek a permanent director position at the Joint Office?

SINGLETON: When I spoke with Chair [Deborah] Kafoury and agreed to enter the interim director position in March, there were some very specific things we wanted to have accomplished. That was my focus from the start, to help fix some issues and set the office up for success before a permanent director took over. I was very clear the whole time that I was in an interim role.

What were some of those fixes you addressed?

A lot of it revolved around data. Like creating the shelter utilization report and other dashboards. I’ve heard we have a lot of unused shelter beds, but hadn’t ever seen numbers to illustrate or contextualize that—which is what our data can do. We also added 40 new positions and set up hiring processes, a framework to hire and onboard all leadership positions in the department. In doing so, we are able to be clear about new positions. My focus was really on how to set the Joint Office up for longer term work and success at the county.

What are you excited about accomplishing at your new job?

When I worked for the governor prior to joining the Joint Office, I was able to have a big role in facilitating the Rose Quarter expansion compromise [between the Oregon Department of Transportation and Portland leaders], same with the I-5 bridge work. I'll be able to reengage with that work at Espousal Strategies, which I'm really excited about. I'll also be overseeing Espousal's community engagement team, which will tap into my facilitation abilities. Being able to incorporate my social work skills into facility discussions is something I really enjoy.

What would you say is most misunderstood about the Joint Office?

I’d say that people are unaware of the amount of coordination that goes into it. Also, folks seem to focus solely on the needs of single adults who are unhoused, not families or couples, which we do a lot of work to support. In general, I think the issue of homelessness is getting over-politicized, and that can lead to misunderstanding. It may not be that everybody's response to what should be done to address homelessness is going to be the same. But those who want to see a different response—I don’t think those people have malicious intentions.

That brings to mind that phrase folks seem to toss around to sow distrust in homeless services, the “homeless industrial complex.” It’s this conspiracy that homeless service providers are making a big profit off of providing those services. What do you think is driving that pushback?

I can only assume that it's rooted in frustration, as well as not seeing investments pan out fast enough. It shows a real lack of understanding of the work. Which means that maybe there needs to be more education around how the work is done—it’s complicated stuff. I will speak for myself and say I could be making a lot of money doing private practice therapy with my background. But us doing this work, we believe people deserve to live inside and want to fight for that. The wages in this work are not necessarily something that allow people to maintain their own housing. I know a lot of our staff are priced out of their own living in Portland as well.

And we are seeing successes—over 4,500 people in our community were housed last year. One thing we don’t talk about enough is inflow to homelessness. Our work is looking downstream from this inflow, and helping pull people out.

What would you say is most critical to slow that steady inflow of people into homelessness?

Rent support and longterm rent assistance are the big ones. One program I'm excited about that I helped advocate for at the state is a bill that offers rent assistance to Oregon foster youth aging out of care. It’s small, just under $5 million, but it’ll make a difference in ensuring that youth can transition into adulthood. Then there's the Regional Long-Term Rent Assistance program [a program similar to federally-subsidized Section 8 housing, but funded through Metro's Supportive Housing Services program]. It's also important we continue to collaborate internally with the county's behavioral health workers to help keep people with behavioral health issues in housing. Same goes for expanded criminal justice programming to help expunge criminal records for people who are denied housing due to their criminal records. There's a lot more we could be doing.

As the region’s main agency addressing homelessness, how much input was JOHS given in the city’s recent plan to ban homeless camping and create established camps?

Zero. We had zero conversations with the city of Portland about this plan before it was announced.

Do you support the proposal?

Here’s what I’ll say: I would really like for folks to engage experts. The goals and values of our leaders are aligned and shared. But, unlike what some may think, social work is not a back-of-the-napkin profession. We have a lot of training. It would behoove us to engage with lived experienced people in the field.

What are any unexpected challenges of the job you've encountered?

I expected more support in siting shelters from other government bodies. That hasn’t come to fruition as quickly as I'd like. I would love that, if we all have identified there’s a problem, we could come together as a community and find space for accessible shelters that aren't in the middle of nowhere.

What are your hopes for the future of JOHS?

You know, I really think we're on a good path. The department is in really good shape and there are some wicked smart people working here who are really passionate about the job. Thats always a plus. Moving forward, I think we need to think about how to communicate better and help people really understand the work, what's needed, and how to be engaged.