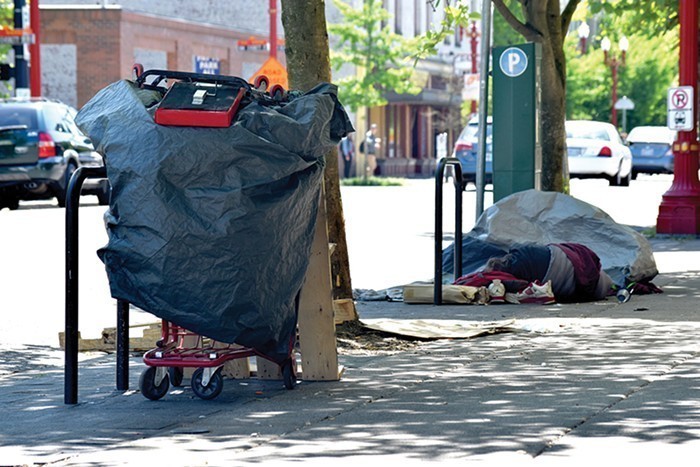 The package of five resolutions, introduced by Mayor Ted Wheeler and City Commissioner Dan Ryan two weeks ago, outlines a number of aspirational and unfunded plans to address homelessness and housing needs.

The initial proposal aimed to create up to three “designated camping sites” with space to hold up to 500 people in unidentified locations. Those wouldn’t be created before the city secured funding for the camps, which it currently does not have. The proposal states that these sites would open to the public within 18 months after those funds are secured.

Under the proposal, once those camps are open, the city would start enforcing a ban on camping in public spaces. If people decline to vacate public property, they will be subject to criminal penalties. However, the proposal requests funding and support from the Multnomah County District Attorneys’ office to create a diversion court to keep those charged out of jail.

The proposal also makes a goal of building 20,000 units of affordable housing by 2033, through new policies and funding requests and proposes partnering with a nonprofit called Worksystems Inc. to help create more jobs for unhoused Portlanders. Lastly, the plan compels the city to ask the state legislature, Multnomah County, Metro, and other jurisdictions to help fund the proposal. No government organizations have yet agreed to do this.

The city budget offices estimates the camps would cost up to $6.8 million annually to operate, with the new housing costing nearly $10 billion to build.

The proposal passed Thursday includes several tweaks, due to amendments introduced by other commissioners.

Commissioners rejected an amendment posed by Hardesty that requested the city attorney’s office to research whether the city could use eminent domain—a tool that the government can use to take private property and convert it to public use—to house Portlanders in vacant buildings.

The main resolutions were not passed unanimously. All five backed the resolutions to increase workforce options for unhoused Portlanders, increase the housing supply, create a criminal diversion program, and find funding for the programs.

Hardesty, who is headed into an election next week against a candidate who supports a camping ban, was the sole commissioner who voted against the resolution that would criminalize unsheltered camping and create mass camps, calling it “cruel and inhumane.”

“I know many become frustrated with me that I spend so much time discussing the safety and needs of the houseless and low-income community members,” said Hardesty. “Some take it to mean I don’t care about the safety and wellbeing of homeowners and businesses. But that’s simply not true. I hear and share the anxiety and frustration community members feel around the city about the houseless crisis. And I’m committed to continuing to work to solve the problem. But the solution as outlined here isn’t real.”

The package of resolutions has been fast-tracked through City Hall with few details and brief community input. Last week, city commissioners heard seven hours of public testimony on the proposal. Yet, instead of an organic mix of public opinions, the first hour or so of public testimony came strictly from those in favor of the proposed ban. That was an intentional decision made by Ryan to allow business lobbyists and realtors to be heard first. It left those in opposition of the ban, including many unhoused people, feeling intentionally unheard by elected officials.

On Thursday, council heard from additional members of the public to comment on several amendments made by commissioners.

Several people who testified Thursday questioned who commissioners were actually making this plan for.

Sean Jacobson recalled previous discussions at City Council over the past decade where commissioners spoke about addressing the homeless crisis as an “emergency,” but avoided comprehensive plans to confront it. That is, until now.

“I think the biggest reason for this is the economic drive for development in Portland,” said Jacobson. “I don't believe the energy behind this issue is in good faith, I think a lot of it is being pushed by large financial interests.”

Kaia Sands, director of Street Roots, referenced a legal notice sent to city commissioners by the ACLU of Oregon on behalf of Street Roots Thursday morning, which demanded council delay Thursday’s vote until more members of the public were allowed to lend their feedback.

“Please read the notice and consider the potential legal ramifications of your vote on the mass camp resolution,” said Sands. “This has not been an equitable, democratic process.”

Lawyers with the ACLU and other civil rights organizations have also flagged the proposal as potentially being unconstitutional. No members of council acknowledged the ACLU notice Thursday. At least five other speakers urged the council to postpone the day’s vote.

Others shared support of the plan Thursday.

Bridgid Blackburn, co-owner of the store Cargo in Southeast Portland, said she had “cautious support” of the proposal, but underscored that it’s been seven years since City Council first declared the city was in a housing state of emergency.

“Clearly, we’ve not acted on this emergency,” said Blackburn. “I would like to understand the level of emergency this is. We need a clear indication that you’ll be able to move together with urgency.”

Another business owner in Southeast Portland, Jason Bolt of Revant Optics, said that his staff’s safety is at risk due to homeless tents blocking sidewalks—forcing his staff to walk in traffic.

“We’re faced by major safety issues,” said Bolt. “It’s gotten exponentially worse. If something is not done to address the safety issues this month, we will leave the area.”

Safety is also a core concern of those experiencing homelessness. On Tuesday, Street Roots hosted a town hall for homeless Portlanders to express their concerns to Wheeler and Ryan. Many spoke about their fears of being vulnerable and unsafe in the proposed large encampments. The city’s resolution includes no details about how people living in camping sites will be kept safe.

On Thursday, an unhoused and physically disabled woman named Amanda Smith raised concerns about having to live in a proposed camping site with her son, who has a mental disability.

“Forcing my son into a large encampment… will cause his mental disability to become worse,” said Smith.

Wheeler responded to Smith’s concerns directly, noting that the camps don’t “replace our spectrum of services.” Instead, he noted, homeless Portlanders will still have options to enter smaller outdoor villages, congregate shelters, and transitional housing—that is, if space allows. Wheeler didn’t address an issue raised by several members of the public that the proposal fails to address the root causes of homelessness.

“Even with these amendments, the overarching goal of this slate of resolutions seems to just further invisibilize poverty and houselessness on Portland streets instead of directly housing people,” said Lauren Armony, an employee at Sisters of the Road. “We cannot claim these resolutions are compassionate care when the people receiving this care are not giving dignity of autonomy and self determination.”

Jennifer Parrish Taylor, the director of advocacy and public policy at the Urban League of Portland, raised concerns that unhoused Portlanders of color would be disproportionately targeted by the policing of homelessness, without offering real solutions to homelessness.

“The substance of this proposal is misguided, the community engagement has been abysmal, and the inclusion of mass camps in counter to all known best practices for ending homelessness.”

Commissioners explained their support of the proposals previous to casting their votes Thursday.

City Commissioner Mingus Mapps called the resolution creating a ban on camping “misunderstood” but critical. His only concern was that the proposed two-year timeline for the policy’s promises was too drawn out.

“The problem with the resolution is that it takes too long to do too little,” said Mapps. “Still, this resolution is a huge leap forward compared to the status quo.”

Ryan explained that his passion for the proposal came from a sense of urgency.

“This is an action for all Portlanders. We know that our public right-of-way in a city is not designed for public camping. We can’t prioritize one reality over the  other. We can’t keep tolerating the intolerable over the tolerable.”

Rubio stressed that her support of the ban was not to allow homeless Portlanders to be criminalized “simply because they do not have a place to call home.”

“But I do believe we need to try ideas to better serve our community,” she said.

Wheeler ended the council meeting with a reminder that Thursday's vote was the beginning of the city’s work.

“The hard part’s ahead,” said Wheeler. “Now we have to make it work. Even if you didn’t get the vote you wanted, there will still be opportunities to shape these resolutions that will be bold, will be effective, will be uniquely Portland, and at the end of the day I hope we end where we started: That we acknowledge that people on our streets need our compassion.”