"We were hoping to do some advance media on this in December," says Karl Rohde, public affairs director for the Bicycle Transportation Alliance, "but we kept getting buried in the news cycle, whether it was by snow storms, scandals, or budget cuts. Nobody in the media cares about us right now."

Or perhaps that's what he's hoping...because a lack of controversy around the idea would certainly make its passage into law a lot easier.

Rohde was speaking at a brown bag lunch today about Oregon's proposed Idaho Stop Sign Law, which is currently making its way through the house of representatives. If all goes according to plan the law, which would allow bicyclists to treat stop signs like yield signs, could be in effect, Oregon-wide, by January 2010. 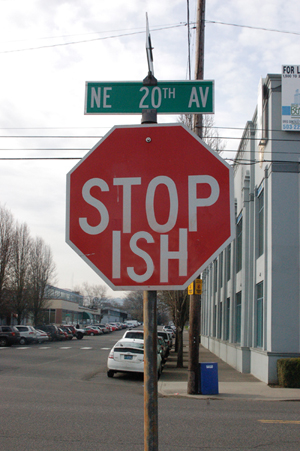 If the law passes, said Rohde, addressing an audience of 40, "you'll all be able to do what every single one of you are doing now, which is coming to a slow and safe speed before a stop sign." A similar law has been in effect in Idaho since 1982, said Ray Thomas, a bike and pedestrian lawyer. "There's just no increase in injuries or accidents for bicyclists under this law." Thomas asked the audience how many of them come to a complete stop when they reach a stop sign, and just one man raised his hand. "A lone pioneer," said Thomas, "and one who deserves our admiration and respect." But Thomas said he wanted the law to reflect the reality of human behavior.

"The BTA would certainly never support anything that put pedestrians or bicyclists in jeopardy," said Rohde. "This law is certainly not designed to free up the scofflaws who flout safety considerations. It allows law enforcement to target the right people." Thomas said that in his experience as a bike attorney, he would rather see motorists harbor ill will towards bicyclists being treated differently than for motorists to routinely see bicyclists flouting the law. "As a bike cop I like being in the position of not having to enforce laws that I would not follow out of uniform," Thomas quoted an Idaho bike cop as saying.

"How many people have been hurt at the stop sign near OMSI or in Ladd's Addition, where the police conduct their stings?" asked Thomas. "I think, if we change the law, that law enforcement is going to be relieved." Portland Bike Cop Rob Pickett was also in the audience. He doesn't have an opinion one way or the other on the law, he told the Mercury. And nor does the Portland Police Bureau. 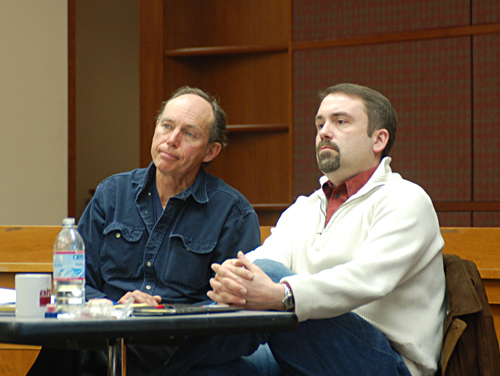 The law is scheduled to go before the house judiciary committee in Salem in mid March. If it passes there, it will go to the senate, and then to the Governor's desk. Transportation Activist Chris Smith, who moderates the website Portland Transport, said he supports the law, but is looking for a two-sentence response to its two most common criticisms: That it's decriminalizing bad behavior, and that it flouts the fundamental principle that there should be the same laws for everyone.

"I think the two sentence response is that bicyclists don't stop for stop signs, anyway, when there are no cars, and that this has been in place in Idaho since 1982, and it's supported by the police, the public, and has resulted in no increase in injuries," said Thomas.

The new law would still require bicyclists to yield to pedestrians, and contains a new $360 penalty for unsafely entering a junction, designed to deter bicyclists from blowing the stop signs if there's any danger that they won't be able to safely clear the junction. Rohde added that he's happy to reappear on Lars Larson's radio show, where he's been pilloried for his support of the law in the past. "I think there are some people who have irrational hatred of bicyclists," he said. "And I can't get through to those people. But I think that most people can see the benefits of this law."

Comments 24
Tags: Media Bikes News Politics Crime Courts Blogs
If you enjoy articles like this, please help the Mercury continue our mission of providing up-to-the-minute information, progressive journalism, and fun things to do in Portland by making a small recurring monthly contribution. Never forget: Your help is essential and very much appreciated!
CONTRIBUTE NOW