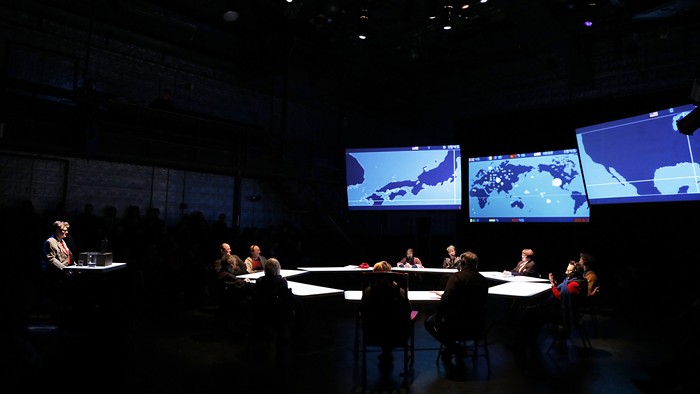 Experimental theater is a high risk, high reward activity. Sometimes TBA means sitting through three hours of trust fund kids farting in cottage cheese to limited effect. But sometimes a spoken word performance— delivered with muffled pathos through a gilded diving helmet—brings you to tears because those specific, unconventional elements work in concert to slip some profound human truth past your jaded defenses. Split Britches' Unexploded Ordinances (UXO) isn't quite either of those things. That can invite both faint praise (I never checked my watch) and unbalanced critiques (it didn't blow my mind into a million pieces). While I very much enjoyed the performance, it's not quite the jackpot you'd want from all the wild ideas it throws together.

A full synopsis of the proceedings would eat up the entirety of my word count. But the broad strokes are that performance veterans Lois Weaver and Peggy Shaw riff on Stanley Kubrick's Dr. Strangelove and lesbian relationship gripes in equal measure. They assemble a "council of elders" (ten septuagenarians, plucked from the audience) to discuss what anxieties of the present day keep them up at night (their unexploded ordinances, as it were). Spoiler: it's mostly Trump stuff. There are also a handful of well executed (if somewhat oblique) monochrome video segments, presented on the three giant projection screens which stand in for Strangelove's "big board."

This is far from Shaw or Lang's first rodeo, and—despite a lot of disparate elements (and a fair bit of audience participation)—the play moves along at a good clip. It stays on the rails for the most part. The Cold War Kubrickian aesthetic is exceptionally on point, and there's plenty of material to mine in comparing this moment of witheringly incompetent nuclear brinkmanship with that of prior generations. And while I'm not sure how well that meshes with all the on-stage elder worship, it was genuinely engaging to see a dozen sassy seniors holding court on stage (sidebar: if you have a grandparent who loves theater you should absolutely take them to this show) (sidebar to the previous sidebar: if you are a grandparent who reads this blog kudos to you and I'm sorry for all the swears).

The problematic elements are small in number but large in scope. As with a lot of experimental narratives, UXO shoots for three distinct themes when it realistically only has the scope for two. The porous relationship between the actor's stage personas and invocations of multiple Strangelove-adjacent characters muddles things further. My companion, who hadn't seen the film, was unable to distinguish when dialogue was actual dialogue or a quotation. On that note, while I'm a sucker for a good Strangelove gag (and quite a few were expertly deployed) some bits were lifted a bit too whole-cloth. 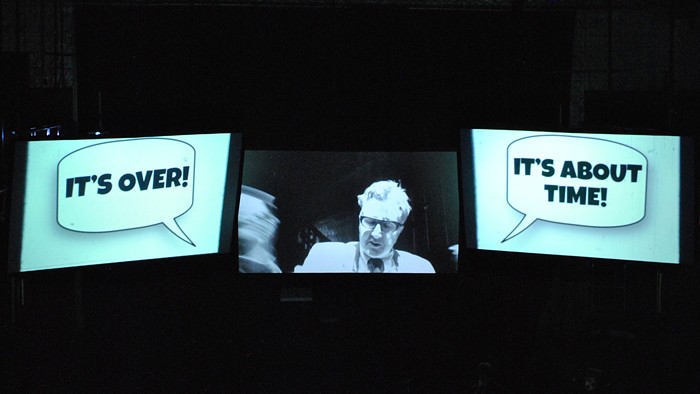 While I believe Split Britches' intentions are good in drawing attention to the wisdom of seniors (the seniors selected all seemed perfectly lovely and very wise), their methodology for selecting panelists (basically: who are the absolute oldest people here) resulted in a "council" that appeared uniformly white and fairly unified in their perspective. It was hard not to cringe a bit when one of them made a comment about how "everyone" had had it pretty good before Trump. I realize that a theater audience in Portland can skew pretty white, but there seemed to be some older people of color in the crowd who might have added quite a bit to the conversation, had they been invited. I realize this is a long running show operated by veterans of the progressive stage, but it might be worth opening up the next council to some respective elders of other communities.

Tags: Theater & Performance TBA TBA2018
If you enjoy articles like this, please help the Mercury continue our mission of providing up-to-the-minute information, progressive journalism, and fun things to do in Portland by making a small recurring monthly contribution. Never forget: Your help is essential and very much appreciated!
CONTRIBUTE NOW