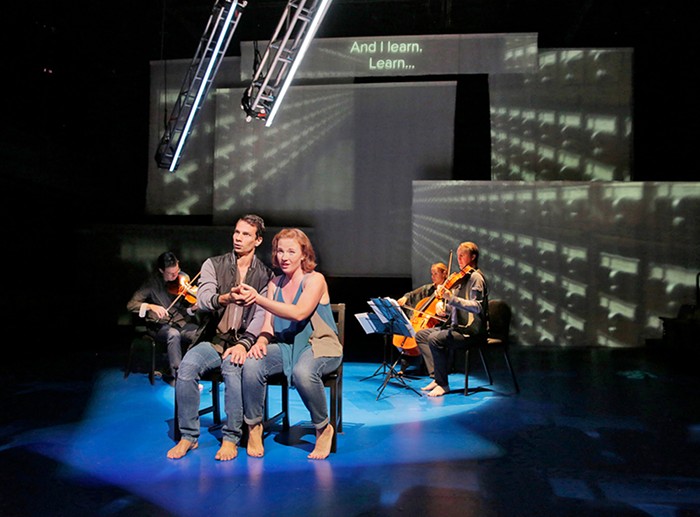 With stories and discussions of transgender identity gaining a firm foothold in popular culture, it was only a matter of time before we heard similar strains from the world of classical music and opera. Laura Kaminsky’s 2014 chamber opera As One was—if not the first—one of the first forays into such subject matter, and since its debut at the Brooklyn Academy of Music, it has been staged throughout the US, with performances in Colorado, California, Montreal, and Berlin.

During the 2016 OPERA America conference, Kaminsky explained she was inspired to compose an opera about a transgender person’s experience to explore two questions: “What is the core of a person? How do you find yourself and be yourself?”

Her research led her to Kimberly Reed, a documentarian whose 2008 film Prodigal Sons followed Reed as she returned to Montana for her high school reunion, post-transition. Reed was, in Kaminsky’s mind, the perfect person to help write As One. Librettist Mark Campbell filled out their team, co-writing the opera’s lyrics with Reed.

Reed and Campbell told Kaminsky’s conceit—the story of Hannah coming to terms with gender dysphoria and making her transition—using two voices. Two singers, a mezzo-soprano and a baritone, share the stage throughout and sing the opera as a kind of dialogue between Hannah’s male-presenting and female-presenting selves.

The struggle for Reed wasn’t so much moving from nonfiction film into opera, but how to find the generality within such a specific story, something she’d also dealt with when making her documentary.

“The challenge was finding ways for the audience to relate to what I was going through,” says Reed. “That was really the same challenge with creating Hannah. The arias in the piece are really based on my own experience, but having the expansiveness of the fictional world to work with was really liberating.”

Reed also played a huge role in developing the staging of As One, through a series of films she made to accompany certain segments of the opera. The films are projected onto five screens, placed around the stage, and either set the mood for a song or, as Reed says, “comment on it in a cheeky way.”

“One of the scenes is called ‘Sex Ed’ and takes place in an uncomfortable sex ed class,” she says. “The video is comprised of archival black and white film that talks about sex education in a really clumsy manner. Sometimes the video starts out in a very naturalistic way, putting us in a specific time or place, but then through the way the image appears and editing of the image blinking on and off between the screens, they set the stage even further.”

As One is humble in its design, written for just two voices and a string quartet. So for all its huge themes, the small scale of As One increases the chance that it can be adapted for equally modest stages, reaching more audiences than a larger scale, more traditional opera could. It’s also allowed Reed and the creative team to see their work adapt and change in ways they couldn’t have imagined.

“The staging and the costumes and the sets,” Reed says, “the different directors have come up with very inventive and creative ways to have the two sides of Hannah relate to each other. That’s very rewarding and satisfying to see them taking this creative cohort and this very surreal jump to depict two sides of one character with two different actors. That theatrical leap continues to surprise me.”