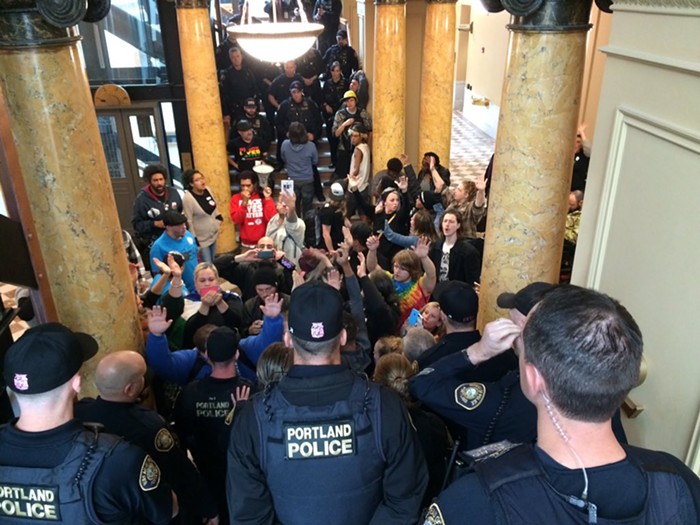 Protestors chant in Portland City Hall, as police block off access to the third floor, where City Council met in a closed-off session. Dirk VanderHart

For the third week in a row, anger over a new contract with the city's largest police union sent Portland City Council into chaos this morning. But this time, Mayor Charlie Hales had a battle plan.

When it became clear roughly a half-hour into a hearing that activists would disrupt proceedings, Hales promptly recessed the meeting. Commissioners immediately reconvened in a meeting room on City Hall's third floor, where cameras were already waiting in order to live stream the meeting online.

Those irregularities aside, the meeting played out as it had been clear it would for weeks. As angry protestors chanted below, council ratified a contract with the Portland Police Association by a 3-1 vote (Commissioner Dan Saltzman was absent).

"I recognize in making this vote I'm saying ‘no' to almost everybody who’s contacted me on this issue," said Commissioner Amanda Fritz, one of the yes votes. As is typical on big issues like this, Fritz had just read a lengthy prepared statement in which she laid out her concerns over the contract (and citizens' anger over it) as well as the reasons she feels it's a good step for the city.

Her conclusion, Fritz said, was that the new contract may attract new blood to a flagging police bureau, and that the city wouldn't get another shot at this deal.

"Today I'm voting based on the cost of delay and cost of ratification," she said. "In my assessment the cost to delay is more compelling and daunting."

She specifically called out Teressa Raiford, a leader of Don't Shoot Portland, saying Portland has "failed" Raiford, "but Teressa has not given up on Portland." Fritz added she would "forever remember" Raiford's "bridge crane" testimony from last Thursday.

Commissioner Nick Fish and Hales, the deal's chief booster, also voted yes—with Fish posting his remarks to his website before he began reading them aloud.

"The challenge before us is a staffing shortage that is reaching crisis proportions," Fish said. "This proposed contract supports two of my top priorities: supporting police reform and investing in public safety."

Hales, the city's police commissioner, kept his remarks brief—perhaps unsurprising given how much he's talked about the contract in recent weeks. He praised strides he says the PPB has taken in recent years, and noted "there's much more to do."

Only Commissioner Steve Novick, a frequent skeptic where dumping more money into police is concerned, voted no. His central objection: That the 9 percent raise included in the new police contract would create a need for money that hasn't been identified in budget forecasts or through new revenue streams.

Novick noted that could change in coming weeks, if an expected revenue prediction is especially rosy, or if voters approve a 3 percent sales tax on recreational pot on November 8.

"We will have a better position in several weeks," he said.

The meeting had devolved early on into the same scenario that led to Hales canceling last week's Wednesday council meeting. Roughly 25 minutes in, Hales responded to repeated outbursts by abruptly announcing a recess and leaving the chamber. Protesters had been performing a sort of call-and-response with a person on a bullhorn in front of the building.

BULLHORN GUY: When black lives are under attack, what do we do?

PEOPLE IN CHAMBERS: Stand up fight back!

It clearly frustrated people who were trying to testify before council. The activists did not care.

Following the recess, and without warning, a video feed appeared on the large video screen in council chambers, showing commissioners had reconvened in the Rose Room on City Hall's third floor. Police had already been blocking access to the third floor all morning, and cameras were at the ready.

Activists immediately gathered in the hallway outside of council chambers and began chants that reverberated up where council was meeting. It was loud enough at times that commissioners' voices were drowned out.

It's not completely clear how offering only remote access to public hearing jibes with state law. The Portland Tribune reported yesterday that at least one public meetings experts thinks it's not legal.

We don’t weigh in on specific scenarios, but are happy to discuss generalities about the law.

Some relevant things for you to consider might be that the law authorizes anyone to attend meetings, that electronic meetings are specifically permitted and that the law is a public attendance law rather than a public participation law.

The outbursts come after activists camped outside of City Hall last night, displaying signs protesting the police deal and voicing anger that Hales locked down the building yesterday in the face of a protest.

There are a lot of reasons why protesters object to the police contract, which ups cops' starting salary, offers across-the-board raises (cost: $6.8 million), does away with the much-despised 48-hour rule, and results in the PPA dropping 11 grievances against the city.

Activists, City Auditor Mary Hull Caballero, and a host of organizations argue the contract is weak, and should've strived for better police oversight. And one of the most controversial points of the deal approved today isn't the language of the contract itself, but of a related "tentative agreement" that made clear the police union would have a lot of sway in a forthcoming body camera policy.

Here's more of our coverage.