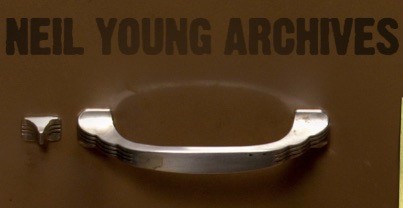 neilyoungarchives.com
Today Neil Young launched his online archives—visit them at neilyoungarchives.com—and I don't think it's too crazy to say it's groundbreaking. The Canadian singer/songwriter's 50-plus-year career has been, quite literally, archived into streaming format, accessible via timeline and a fun filing-cabinet graphic, with each song taking up a different folder. It's a little hard to explain, but incredibly fun to play around with.

So... his music's streaming? What's the big deal? Well, apart from the interface, which is catnip for Neil Young dorks, the music is available in different resolutions from 320kbps (MP3/Spotify/Apple Music/etc. quality) to incredibly high-rez 192/24, which some contend is actually wasteful in how much bandwidth it takes up (some say 96/24 is just as good) but in this instance sounds undeniably great. You can alter the resolution depending on the speed of your connection, so you don't clog the router at your work, for example, but you should also be aware that many computers can't process a full 192/24 stream without the help of an external DAC (digital audio converter). The site uses a file format called Xtream which allows for the high-quality audio to be streamable and scaleable, although you will want a pretty fast and steady connection to get the best quality without interruption. There's a pretty thorough FAQ on the Archives site if you want to get bogged down in the technical details.

Right now the Archives seem to contain pretty everything Young has officially released, including a brand-new album, The Visitor, that came out today. But there are other tantalizing little tidbits to be found, with little scraps of virtual "notepaper" to mark as-yet-unreleased albums that will potentially be available soon. Young is notorious for having hordes of unreleased stuff that's just as good as what he actually put out into the world, with studio albums like Chrome Dreams and Homegrown and countless live recordings making up the lore that surrounds his legacy. While the music from these projects is not yet streaming, there are place markers for it, suggesting they are on the way.

A view of the timeline at Neil Young's Archives. Interspersed between his albums are hand-scribbled notes, which are unreleased albums. neilyoungarchives.com

You need to sign up with an email address and a password to gain access, but it's totally free for the time being. In June 2018 the site will switch over to a paid-subscription model (no word on how much) so now's a good time as any if you want to explore.

Also, the Archives site will be streaming a live Neil Young concert tonight at 8 pm Eastern (5 pm Pacific) from Omemee, a tiny town in Ontario where Young spent much of his childhood. The show is a solo performance so I'd expect it to contain acoustic versions of several of the new songs from The Visitor, the just-released album he recorded with Promise of the Real.