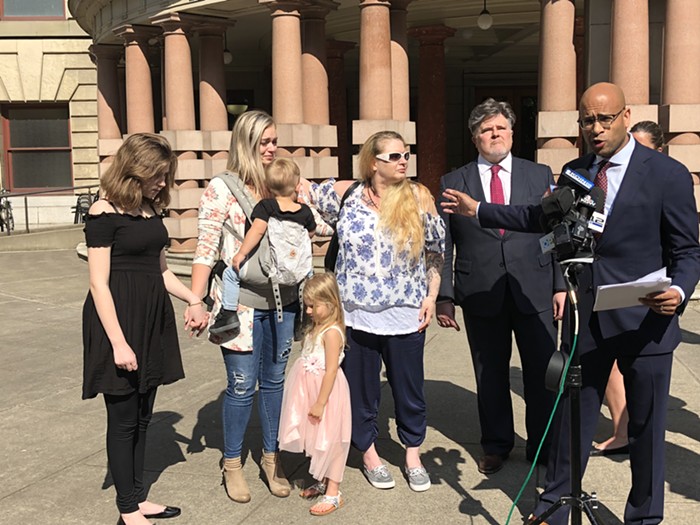 Attorney Andrew Stroth points to his client, Barbara Elifritz at a Monday press conference. Elifritz was joined by her two daughters and grandchildren. Alex Zielinski
Sponsored

The ex-wife and daughter of John Elifritz have filed a federal lawsuit against the Portland Police Bureau (PPB), accusing officers of negligence when they "willfully and maliciously shot John Elifritz to death" the evening of April 7.

Elifritz was fatally shot by officers after he entered the Cityteam Ministries homeless shelter in Southeast Portland and—according to witness testimony—appeared in the midst of a mental health crisis. A staff member called the police. PPB officers, however, had already spent most of the day tracking Elifritz, since he was suspected of stealing a car. When eight officers stormed into the Cityteam shelter, their guns were already raised and pointed at Elifritz.

In the choppy cell phone video that caught the chaotic incident, it's not immediately clear what happened next. PPB allege he was holding a knife. The video shows officers shooting bullets (first non-lethal, then lethal) at Elifritz from across the room. By 8 pm, Elifritz was dead.

The complaint was filed Tuesday evening on behalf of Barbara Elifritz, John's ex-wife, and their 12-year-old daughter, Stormy. The plaintiffs will be represented by Portland attorney Timothy Volpert and Chicago civil rights attorney Andrew M. Stroth.

While the lawsuit places individual blame on the seven Portland police officers and one Multnomah County Sheriff's Deputy involved in the shooting, it also accused the City of Portland for not upholding the settlement agreement it made with the US Department of Justice (DOJ) in 2014. 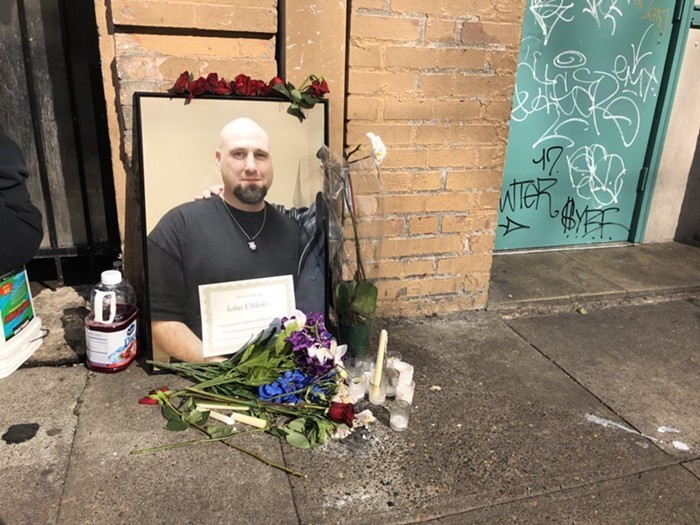 A memorial to Elifritz, placed outside the homeless shelter where he was killed. Alex Zielinski

That's the agreement reached after a 2011 DOJ investigation found that the Portland police consistently engage in a “pattern of... unnecessary or unreasonable force during interactions with people who have or are perceived to have mental illness.” In the settlement agreement, the city promised to overhaul how PPB understands and reacts to people in a mental health crisis.

According to the lawsuit, "Neither this Settlement Agreement nor its implementation has changed the pattern or practice of the improper use-of-force by the Portland Police Bureau against people with mental illness. The death of John Elifritz is a result of [this pattern]."

The complaint also alleges PPB follows a "police code of silence," or a policy that encourages police stay tight-lipped during official investigations, in order to protect themselves or fellow officers.

It's the same argument Attorney Stroth used in a 2016 lawsuit against police who fatally shot a teenage boy in Chicago, another city that's under investigation by the DOJ for how often its police rely on "unnecessary and avoidable uses of force."

Both Barbara Elifritz and Stormy will appear alongside their attorneys to announce the lawsuit at a 9:30 press conference outside of Portland City Hall—timed to coincide with Portland City Commissioners' weekly council session.

"What we want is an independent transparent investigation into Portland police," Stroth said. "What I've seen is a systemic failure."

"I know there’s nothing, nothing I can do to get [John] back," she said, through tears. "But if we all stand together, maybe another family won’t have to go through this."

Elifritz was also joined by family members of Brian Babb, a 49-year-old veteran with PTSD who was fatally shot by Eugene police officers in 2015.

According to the city, a surveillance video from inside the Cityteam shelter will be made public later this week.