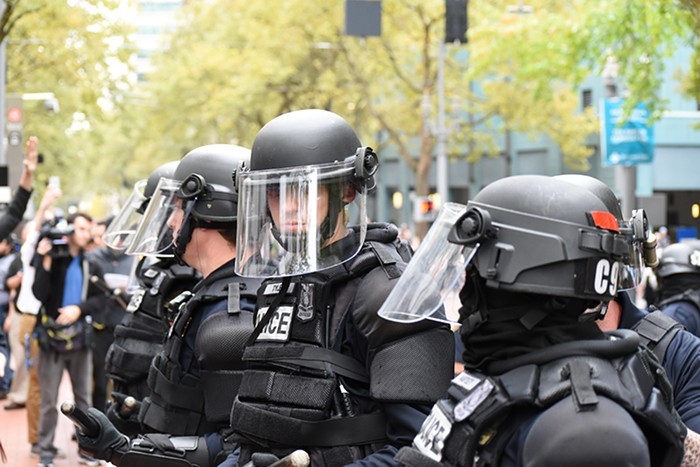 The city, the feds, and the police union all agree: It's too late to give a new alliance of mental health advocates special standing in the court process that reviews Portland's federally-mandated police reforms.

"The Mental Health Alliance (MHA) is playing fast and loose with the law," writes Anil Karia, an attorney representing the Portland Police Association (PPA), in a response filed in federal court on September 23. "MHA's motion is five-and-a-half years too late."

PPA's response was echoed (with a little less zeal) in court documents submitted by attorneys representing the City of Portland and the US Department of Justice (DOJ), who are the main players in the lawsuit this court process is tied to.

In 2012, the DOJ sued the city after a federal investigation found that Portland police officers disproportionally used deadly force against people experiencing a mental health crisis. The resulting settlement agreement between the city and the feds came with a long list of promised reforms—like the creation of a civilian oversight group, new use-of-force policies within the Portland Police Bureau (PPB), and new mental health training for all officers. To guarantee the city and PPB stuck to this agreement, the settlement included mandatory check-ins with US District Judge Michael Simon to evaluate the reform process.

From the very beginning, PPA and the Albina Ministerial Alliance Coalition for Justice and Police Reform (or AMAC, a faith-based civil rights organization) have been allowed to participate in the evaluation process—PPA as a part of the defense and AMAC as an independent "friend of the court," allowed to submit written court briefings and present oral arguments during court check-ins. The idea at the time was for AMAC to represent advocates in the police accountability and mental health communities in the court proceedings.

Earlier this month, the newly-formed MHA submitted a formal request to Judge Simon, asking to be granted the same kind of access to this review process as AMAC. In the request, MHA's attorney Juan Chavez argued: "There is no focused voice from the mental health community currently in these proceedings, and without this community's participation... the current arrangement will continue to victimize Portlanders with mental illness when they interact with the Portland Police Bureau."

As evidence that the current court review process isn't working, Chavez points to the April death of John Elifritz, a man who was fatally shot by police officers after stabbing himself with a knife in a homeless shelter and then appearing to lunge towards a line of armed officers. Portland police were aware that Elifritz was having some type of mental health crisis when they shot him.

But the city, DOJ, and PPA all believe that the mental health community is already well-represented in the review process. City Attorney Tracey Reeve points out that two of the three organizations that formed MHA—Disability Rights Oregon and the Mental Health Association of Portland—are already members of AMAC, meaning they already have the kind of legal power they're requesting.

"Thus, the MHA would not present any more of a unique voice that its individual member organizations," writes Reeve in the city's response, adding that the request comes far too late in the review process.

PPA's explanation comes across a bit more vindictively, suggesting that MHA has some hidden, malicious agenda behind its request.

"We should not allow ourselves to be fooled by MHA's sleight of hand," writes Karia in the court filing. He notes that only after the DOJ and city have spent "thousands of hours and millions of dollars" working to reform the police bureau, does MHA wish to "inject itself" into the process.

Karia goes on to question MHA's suggestion that Elifritz' death was the result of subpar policing. Instead, Karia argues, Elifritz was a "self-avowed white supremacist" on a "drug-fueled crime spree," and (It's important to note that PPB was not aware of Elifritz' past membership with the European Kindred, a local white supremacist group, at the time of his death.)

Chavez, the attorney representing MHA, says this response only underscores the court's need for a stronger voice representing the mental health community.

"If that's how PPA needs to defend themselves, clearly there is still a divide in how the bureau views itself in relation to mental health crises," says Chavez. "That just makes our input that much more important."

The next court check-in with Judge Simon is October 4. Chavez intends on filing a response to the PPA, DOJ and city responses soon, in hopes of getting a court ruling on MHA's status before next week's hearing.