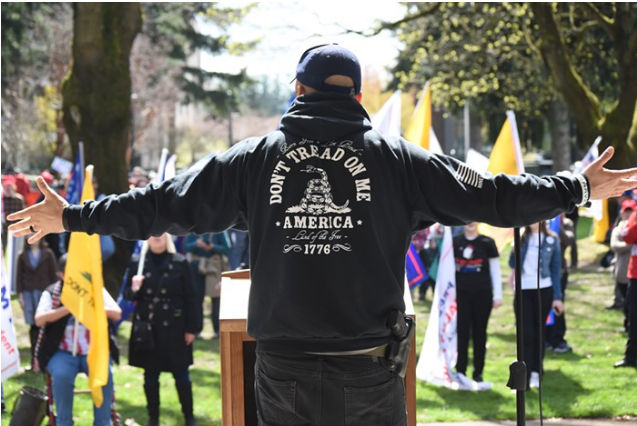 The next day, the Oregonian ran a love letter to the leader of the Portland area’s own far-right extremist group.

You just don’t get him like I do, claims Hovde, who saw Gibson speak for the first time last week. From Hovde’s perspective—standing among a small crowd of supporters who had gathered to hear Gibson speak at a gun-rights rally held on the grounds of Washington State University Vancouver—Gibson is a pretty okay guy.

“Gibson didn't look like the harasser and violent bully I've been reading about,” Hovde wrote.

It’s nice that Hovde had a pleasant interaction with the leader of Patriot Prayer—a militaristic group of far-right provocateurs based in Vancouver, Washington that’s known for hosting disruptive protests in Portland. It’s also not surprising: Gibson has perfected a brand of eyebrow-furrowed sincerity that, when paired with his oft-mentioned spirituality, can seem genuine, at least to a Patriot Prayer first-timer.

Most of us, however, are far more familiar with the genuine fear and violence that Gibson regularly leaves in his wake.

We’ve seen the tense, testosterone-fueled yelling matches and fist-fights between Gibson and the black-clad members of Portland’s anti-fascist community. We’ve heard the police reports of Patriot Prayer members lugging rifles and ammunition to a “peaceful protest” in downtown Portland. We’ve spoken to our LGBTQ friends and Muslim neighbors about how they feel they must stay indoors or leave town altogether whenever Gibson has planned a protest. We’ve felt the nervous knot in our stomachs the morning of a scheduled Patriot Prayer rally as we wonder what a breaking point looks like.

Portlanders are also familiar with another participant in Patriot Prayer’s rallies: Jeremy Christian, the man who marched with Patriot Prayer before being accused of fatally stabbing two men on the MAX after they confronted him for spewing anti-Muslim remarks at two African American girls.

Even Hovde seems to understand that Patriot Prayer’s Portland provocations have become a problem. “Mayor Ted Wheeler and the Portland City Council need to make it clear that Portland's streets are not open for takeovers and violent behavior,” she writes. “Free speech can happen without hijacking other citizens' ability to move about safely.”

Ideally, yes. But that's not what we’ve seen when Gibson brings his “free speech” demonstrations to Portland.

Every single protest in Portland that ended in violence over the past year and a half was organized by Patriot Prayer. That consistent, predictable, and seemingly remorseless violence inspired Mayor Ted Wheeler to pen a hasty ordinance earlier this month in an attempt to limit violent protests. It’s also why Clark College canceled classes and shut down campus for Gibson’s recent visit, which was organized without the school’s permission or participation.

Hovde’s simplistic attempt to soften the reputation of the man at the helm of a group that attracts white supremacists and senseless violence doesn’t just fall flat—it also carelessly normalizes a movement that has planted, and now nurtures, the seeds of hatred and fear in our community. It’s the same kind of movement that inspires angry people in Pittsburgh, Louisville, Charleston, and other seemingly peaceful cities and towns to pick up a gun and make a statement.

Media outlets have the privilege—and the responsibility—to present the public with various perspectives on divisive issues, often in the form of editorials. We rely on these outlets to present us with opinions that are rooted in objective truths, regardless of whether or not we agree with them.

At a moment when lethal hate crimes from right-wing extremists have nearly become weekly occurrences, Hovde’s piece is an irresponsible distraction from reality.

Her words serve as a reminder that some of the most dangerous movements are disguised by friendly first impressions and "challenging" conversations. But at what cost?