Book Review: Alyssa Mastromonaco's So Here’s the Thing… Is a Listicle Book with Some Smart Ideas 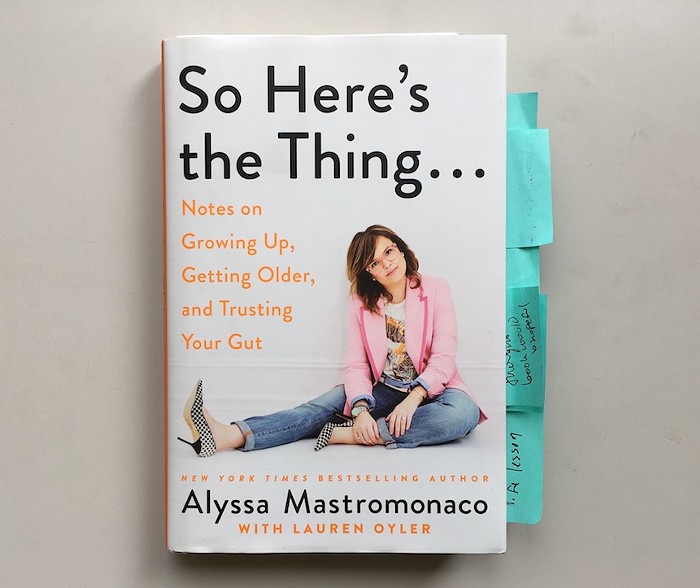 Here's my copy. Every one of those sticky notes represents something I thought was interesting.
Alyssa Mastromonaco is a former Obama White House staffer (Deputy Chief of Staff for Operations), a favorite, recurring Pod Save America and Lovett or Leave It podcast guest, and a co-host of Crooked Media's Hysteria! podcast. Since the Obama White House, she’s worked for Vice Media, A&E, and most recently as a “super volunteer” for the National Abortion and Reproductive Rights Action League (NARAL).

Everyone within arm's reach, for the past two weeks, has had to deal with me chiming in, “You know what Alyssa Mastromonaco says about that...” because Mastromonaco has a new book out and I love it. It’s a follow up to her 2017 Who Thought This Was a Good Idea? which featured a timeless cover photo of Mastromonaco and President Obama trying to share a first class plane seat. This new work So Here's the Thing... Notes on Growing Up, Getting Older, and Trusting Your Gut is an delightful, digestible nosh of useful tips from Mastromonaco's long career in politics. Here are a few things I loved about the book:

Listicle Book: Who Thought This Was a Good Idea? played around with short, readable anecdote format, but So Here's the Thing... cranks that up into full listicle book classification. Attempting this format is not for the faint of heart, but Mastromonaco's writing style—a hybrid of conversational yet organized—thrives in it. The book is like a personable note became a book (and the note was written by Alyssa Mastromonaco). "Most Played Songs on My iPhone as of 8/6/18" is a pretty bold move (I would not have the courage). I could have used "Things You Should Never Say to or Around Your Boss" about ten years ago.

Life Lessons, They're in Here: So Here's the Thing... has a whole chapter dedicated to dissuading readers from asking Mastromonaco how to be her by the time they're 35, but the book still offers tons of useful advice. How do you take a quick shower? How do you express feelings without taking them out on your employees? How do you avoid mistakes while traveling? "It's impossible to avoid messing up while traveling," Mastromonaco says, but then she offers a few tips anyway—and tells a story about trying to hide her jeans from the Queen.

Getting the Eggs Test: Mastromonaco doesn’t call it the eggs test. She says "I persuaded my beloved gyno to give me an AMH test, which measures the quantity (not quality!) of eggs you're working with." Mastromonaco is thinking about whether she wants to try to have biological children and there's a lot to unpack in her doctor's reluctance to tell her what her personal fertility looks like. But she persists because she's Alyssa-fucking-Mastromonaco!

She Recommends a Vape: Which vape? You'll have to read the book!

Halloween is Saved with the SLAY Drive-in! Tonight Through Oct 31!

Your Guide to Halloween 2020 Food & Drink Specials in Portland