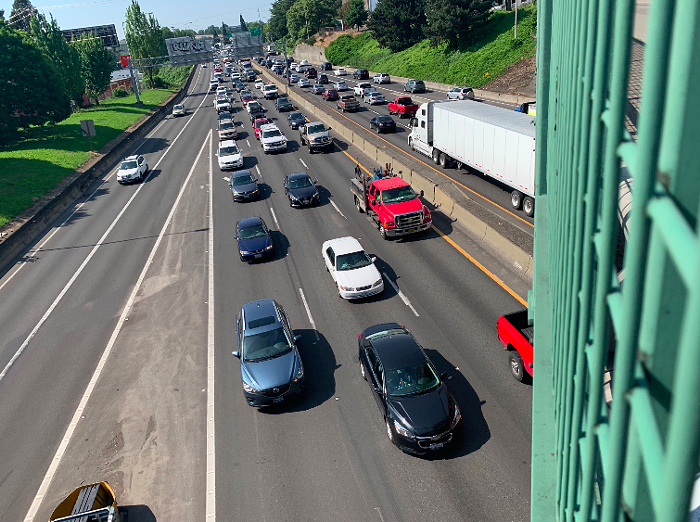 KATHLEEN MARIE
The Oregon Department of Transportation’s (ODOT) $450 million plan to revamp Interstate 5 in the Rose Quarter is nothing more than a "highway boondoggle," according to a new report out today that analyzes the project in the wider context of other freeway plans across the country.

ODOT says its Rose Quarter Improvement Project, which will add new shoulder lanes to either side of a 1.7 mile stretch of I-5 that’s known for clogging up car traffic, should help improve congestion, reduce carbon emissions from car engines idling in traffic, and make that highway portion safer for both commuters and first responders. But those who oppose or are skeptical of the project—a broad club that includes Portland Transportation Commissioner Chloe Eudaly, Metro Regional Government, Portland Public Schools, and many others—say the project wouldn’t do much to improve traffic in the long term, and could have a devastating effect on its surrounding neighborhoods, both from an environmental and societal perspective. They have also cast doubt on the methodology ODOT used to predict lowered carbon emissions and reduced traffic.

All those points are explored in “Highway Boondoggles 5,” the latest roundup of dubious American freeway construction projects compiled by the U.S. Public Research Interest Group (U.S. PIRG). From the report:

“Even as Portland shifts toward a safer and more sustainable transportation system, the state is planning a $450 million project to widen and add new lanes to I-5 through Portland’s Rose Quarter. The project will increase the number of lane-miles of freeway in the project area by 50 percent, with extra-wide shoulders that could fit an even higher-capacity freeway in the future. If built, the project will mean more driving, more pollution, and a step backward for the city.”

Back in April, ODOT spokesperson Don Hamilton pushed back on those ideas in an email to the Mercury.

“The project adds a safety shoulder and an auxiliary lane in each direction, not a through lane, and does not widen the overall footprint of the freeway,” Hamilton wrote. “We expect a significant drop in crashes and delays.”

The Rose Quarter project, which is still in its public review phase, is one of nine plans highlighted in U.S. PIRG’s report. Charlie Fisher, director of the OSPIRG Foundation (the Oregon chapter of U.S. PIRG) told the Mercury that to his knowledge, it’s the first plan from Oregon to be included in any of the organization’s five Highway Boondoggle reports.

Fisher said most major freeway expansion projects U.S. PIRG has studied have come with a promise from local leaders that the changes will ease traffic congestion. But, as U.S. PIRG's own studies continue to prove, that expectation usually doesn’t come to fruition.

“The goal of reducing congestion when it comes to these massive freeway projects is never one that can be achieved, because when you create more capacity, it brings around this concept of induced demand, which has been called the fundamental law of highway congestion,” Fisher said. He added that ODOT is poised to be “spending hundreds of millions of dollars on a project that doesn’t meet its goals.”

“In understanding induced demand it’s important to recognize that traffic and congestion in this area of I-5 has grown substantially in recent decades without widening the highway,” he wrote. “The region’s population growth is a significant factor in this increased congestion and I haven’t yet seen anything that indicates adding an auxiliary lane contributes to the population increase.”

U.S. PIRG also studied ODOT’s claim that the project will make for safer driving conditions. While it makes sense that clearing up a bottleneck, even temporarily, would make driving safer, Fisher said that this specific portion of I-5 isn’t particularly unsafe compared to Portland roads in general.

“We drew that analysis from Metro, and their public comment on the project,” he said. “There’s been analysis by other organizations looking at the traffic fatalities there, and there are other places that are much higher.”

The report also includes a section that follows-up on past highway boondoggle plans to see how they progressed. In Wisconsin, Republican Governor Scott Walker had a change of heart about expanding Interstate 94 East-West in Milwaukee in 2018. The project didn’t go through, and U.S. PIRG credits Walker for changing his mind about the plan.

“There are some groups out there that want to spend billions and billions and billions of dollars on more, bigger, wider interchanges across the state,” Walker is quoted as saying in the report. “I actually think we should be fixing and maintaining our infrastructure. I don’t know that we need bigger and better and broader right now when we have a changing transportation system.”

As for the projects that did get completed?

“Lo and behold, we still see traffic in those areas,” Fisher said.