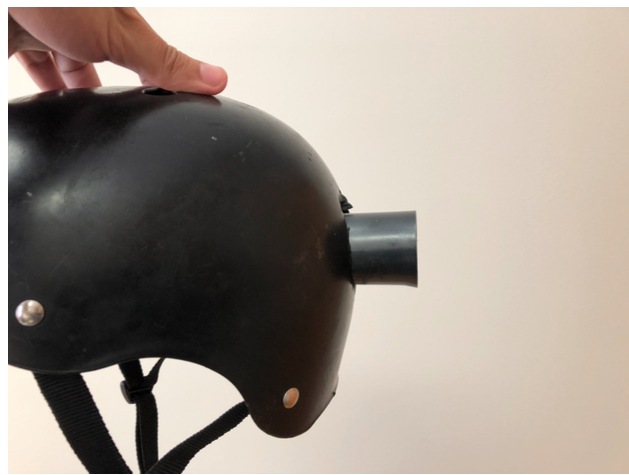 The helmet plaintiff Aaron Cantu was wearing when he was hit by an officer's flash-bang grenade. Aaron Cantu

Three Portlanders who sustained injuries during a 2018 protest have joined together to sue the City of Portland and Portland Police Bureau (PPB) officers, accusing the city of allowing its officers to use violent, unnecessary tactics to muzzle the demonstrators' free speech.

"The City of Portland has a custom and practice of using militarized force against protestors," reads the complaint, filed Monday. "When force is used, PPB makes no effort to limit its force to individuals who actually pose a threat of violence, instead using force indiscriminately at anyone who happens to be in the crowd."

The joint lawsuit names James Mattox, Aaron Cantu, and Tracy Molina as plaintiffs. All three were participating in a counter-protest to the August 4, 2018 "Gibson for Senate Freedom March," a Portland demonstration organized by the far-right agitator Joey Gibson. Gibson, who was making an unsuccessful run for US Senate at the time, is the founder of Patriot Prayer, the small group of alt-right enthusiasts based in Vancouver, WA.

On the day of the August protest, hundreds gathered at the Portland waterfront to oppose Patriot Prayer's far-right rhetoric and threats of violence. However, according to the suit's plaintiffs, the main violence that took place on August 4 came from Portland's own police force.

The complaint focuses on a specific moment during the chaotic demonstration: When officers decided to fire so-called "less lethal" munitions into a crowd of 50 or so counter-protesters near SW Columbia and SW Naito.

"PPB initiated their attack on the counter-fascist protestors following no provocation," the suit reads.

In reports penned after the protest, officers say they were responding to protesters who were throwing rocks and "smashing the windows of police cars." PPB has yet to produce evidence supporting this claim.

Mattox was walking with protesters on SW Columbia when officers began shooting rubber bullets and flash-bang grenades into the crowd. The complaint describes the scene best: "At the time plaintiff was shot he was... waving his arms and his anarchist shield, flipping off the officers, and shouting profanities."

After being shot in the leg by a rubber bullet, Mattox picked up the bullet and shouted at the officers, "Look, you missed!" The same officer fired again, hitting Mattox in the right arm. 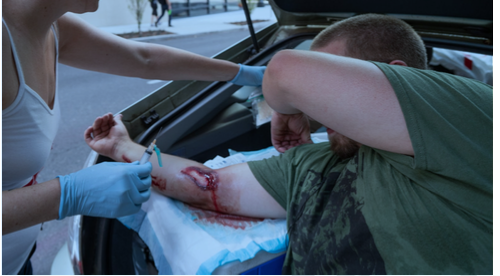 James Mattox, shortly after being hit by an officer's rubber bullet. James Mattox

He left the crowd with a bleeding gash, seeking medical care. The complaint claims the PPB officer shot Mattox in retaliation for "engaging in speech that [the officer] did not condone."

Cantu was in the same crowd of counter-protesters when PPB began firing its munitions. He was running away from the police when an officer's flash-bang grenade lodged itself into his skull. Cantu was wearing a bike helmet at the time, but the munition was powerful enough to blaze through his helmet and cut into his head. If he hadn't been wearing the helmet, the complaint reads, Cantu could easily have died from the impact.

Cantu suffered a traumatic brain injury and still suffers from dizziness and tinnitus.

Mr. Cantu has sustained emotional distress," the suit adds, "including, but not limited to, pain and suffering, discomfort, fear, frustration, a fear of trusting those in positions of power, and anxiety."

Molina is the only plaintiff who was arrested on August 4. Molina came to the protest with a sign reading, "Hey Racists Stop Making Your Ignorance Our Problem Grow Up or Go Home.” During PPB's confrontation with counter-protesters, Molina allegedly followed officers orders to stay on the sidewalk. But, the complaint reads, this didn't stop an officer from grabbing her protest sign from behind.

Molina did not let go of her sign, which allegedly prompted an officer to knock her to the ground "with such force that she fell and rolled into the middle of the street," where she was then crushed by several dog-piling officers.

Molina was charged with disorderly conduct, attempt to commit a felony, and interfering with a police officer. The criminal case was eventually dismissed in her favor.

The plaintiffs have accused the City of Portland and its officers of violating the Fourth and Fourteenth Amendments by using excessive force with little provocation and violating the First Amendment by using violence to silence protected speech. They also accuse the city of negligence, battery, false arrest, and intentional infliction of emotional distress.

"Without adequate training, supervision, or review of PPB’s officers, defendant City of Portland has created an environment of militarized responses to mild forms of dissent," the suit reads. "Additionally, by firing their lethal weapons directly into a passive crowd... agents of City of Portland created an unnecessary and unreasonable risk of harm against all present."

The complaint specifically notes how PPB officers do not appear to use the same amout of force against right-wing protestors, "despite their disobedience of officers’ orders."

"[Officers] chose to attack plaintiffs’ group in part because they disagreed with the political message of the anti-fascist demonstrators and sympathized with the fascists," the document reads.

The plaintiffs, represented by three separate attorneys, have requested a jury trial.

They're not the only ones who've turned to the court system to address officer-inflicted injuries stemming from the 2018 protest. In August, Michelle Fawcett sued the City Portland for physical and psychological damages sustained after being hit by a flash-bang grenade, shot by a PPB officer on August 4, 2018. She's asked the city pay $250,000 for her injuries.