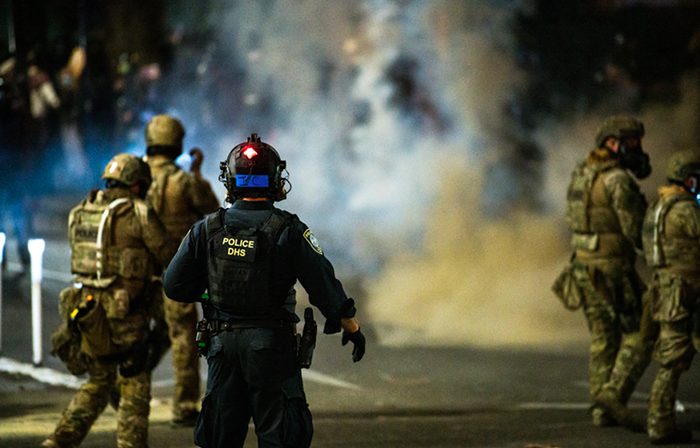 Portland Police work in concert with federal officers to tear gas and disperse protesters, Friday July 17. Mathieu Lewis-Rolland
If it was the Trump administration's intention to "quell" Portland protests by sending in federal officers to tamp down demonstrations, so far it hasn't worked. At its largest, Friday night's July 17 rally brought an estimated 1,000 people to the downtown Multnomah County Justice Center and Mark Hatfield Federal Courthouse to protest police brutality.
Sponsored

In response, federal officers with the Department of Homeland Security (DHS) fired an alarming amount of CS tear gas, mace, smoke, and munitions at the crowd. They appeared to be coordinating efforts with local Portland Police Bureau (PPB) officers, also quick to inflict violence on protesters Friday evening—a partnership PPB denied earlier in the day.

The 50th day of protests in Portland started peacefully at 7 pm with a candlelight vigil held by City Commissioner Jo Ann Hardesty outside the Justice Center. Both Hardesty and Oregon State Senator Lew Frederick addressed the crowd, sharing their support of the Black Lives Matter movement, before handing the mic over to Hip Hop Stands Up, a collective of local musicians and artists calling for an end to police brutality. While the neighboring Chapman and Lownsdale squares had been fenced off by law enforcement in an orchestrated sweep Thursday, protesters had managed to dismantle most of the fence by Friday evening, allowing attendees to again gather in the parks that have become a hub for nightly rallies.

Perhaps not coincidentally, the first violence of the night came from federal officers soon after Hardesty and Frederick left the park blocks. Around 10 pm, two teams of federal officers emerged from the west, yelling at protesters to get out of the street. It's unclear what, if anything, provoked the officers' assault—as no members of the public were on federal property at the time. The two dozen officers sprayed mace into the faces of protesters, shot people with pepper balls, and fired flash bangs and a voluminous amount of CS gas (or tear gas, which has been temporarily restricted in Portland by a federal judge) into the crowd, which included children and elderly adults who had been attending the vigil and hip-hop concert.

It’s hard to explain how much tear gas there is in the air, but it’s a lot pic.twitter.com/bXYggF1xOi
— Sergio Olmos (@MrOlmos) July 18, 2020

At roughly the same time federal officers were attacking mostly peaceful protesters, Oregon Attorney General Ellen Rosenblum announced that the state will be suing several federal law enforcement agencies (including DHS, US Marshals, Custom and Border Protection, and others) for their aggressive, oversized response to protests in Portland. Included in the suit is an incident that occurred last weekend in which a protester with his hands in the air was shot in the head by federal officers and seriously injured.

“Every American should be repulsed when they see this happening,” Rosenblum wrote in a press statement. “If this can happen here in Portland, it can happen anywhere.”

Following the temporary dispersal of the crowd in the area around the Justice Center, a crowd of around 300 marched to Mayor Ted Wheeler's residence in the Pearl District to protest his response to the arrival of federal officers in Portland. By 11:30 pm they had rejoined the crowd of 300 chanting outside the federal courthouse. That's when people began taking the fencing that had once surrounded the public parks and began leaning pieces of fence against the makeshift entrance to the federal courthouse. Officers had previously been shooting tear gas canisters and munitions from this entrance.

At midnight, federal officers tossed a smoke canister from this entry point to dispel the crowd. Protesters responded by placing more fencing against the building—secured with with sandbags—as hundreds sang along to Rage Against the Machine's "Killing in the Name Of" line: "Fuck you, I won’t do what ya tell me!”

At 12:15 am, Portland police officers—announced that blocking the doors at the federal courthouse was a crime, and protesters were risking arrest and riot control retaliation by doing so. This inspired the crowd to turn their attention away from the federal courthouse, and back to the Justice Center, where they began blocking the doors there. Police responded with a brief launching of flash bangs and pepper balls. Protester barricades were also erected at the Edith Green-Wendell Wyatt Federal Building that houses 16 federal agencies just south of the Justice Center.

A crowd of 300 were still in the parks chanting and singing at 1:45 am when PPB declared a large part of downtown "closed," ordering protesters to leave the area. When the crowd refused to move, a line of federal officers launched tear gas and munitions at demonstrators, appearing to be in concert with PPB's order. Minutes after, PPB officers emerged from the clouds of gas, pushing protesters west. This seemingly coordinated effort came hours after PPB Chief Chuck Lovell explicitly stated that local cops were not collaborating with federal officers.

By 2:30 am, PPB had made several arrests—including members of Riot Ribs, a group of activists who serve free food during the nightly demonstrations. According to those on the scene, the workers were packing up the donated food into a U-Haul and were trying to drive away from downtown when the volunteers were stopped by police.

Police on motorcycles are just following this uhaul around in circles. pic.twitter.com/LKOzhweGt3
— Alex Zielinski (@alex_zee) July 18, 2020


The donated food (as well as personal belongings) were confiscated by officers, and according to those with Riot Ribs, their members were arrested for allegedly trying to elude police. The U-Haul was then towed away by the city after officers slashed the vehicles' tires.

Officers refused to answer questions from the Mercury about the arrests.

PPB slashed the back tires of that uhaul — a tow truck just came and dragged it off.
— Alex Zielinski (@alex_zee) July 18, 2020

Around this same time, several members of the press reported they were being threatened and ordered to leave the area by Portland Police—a violation of the temporary restraining order put in place by a federal judge to keep law enforcement from targeting media and legal observers during protests.

Police had forcefully dispersed the evening's demonstration by 4 am. More protests are already planned for tonight, and now a national movement of rallies in support of peaceful Portlanders who are being snatched up by federal officers are being scheduled as well.

Continuing following the Mercury throughout the weekend for the latest news and updates.