Crying Wolf: If Portland Tourism Dies, You Can Thank Downtown Business Interests and the Police 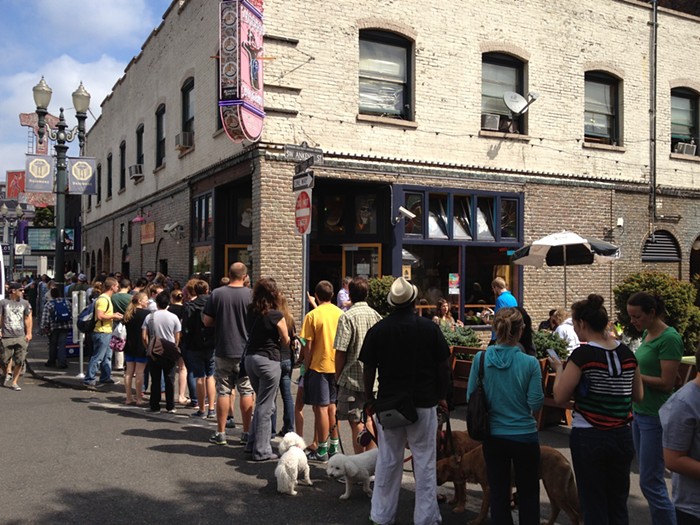 Ye Olden Days of Portland Tourism: A line well over one hundred strong snakes out of downtown's Voodoo Doughnuts, circa 2012. WSH
A tale of two years: In 2019, I received multiple texts from out-of-town relatives and friends begging to visit me in Portland. But then 2020 rolled around, and these are the type of texts I received:
Sponsored

“When are you moving back home? Stay safe!!”

“What is going on in Portland? I hear it’s a battle zone!”

“Riots in Portland? Are you okay? Call me now!”

Portland—once thought of as a whimsical doughnut-land filled with jolly weirdos on bikes—now has an absolutely terrible national reputation that’s less of a Portlandia episode, and more like one of Dante’s various levels of hell.

How did we get here? Well, zooming out, you can largely thank the national media (particularly FOX News) who often parroted willfully misleading police reports from last summer’s protests, and depicted events that were often confined to a few blocks as if the entire city was a war zone.

This spawned a slate of absolutely ludicrous headlines, most recently culminating in a commentary published last week in Forbes, "Death of a City: The Portland Story?" which compared our economic troubles—those shared by every. single. major. city. in. America.—to a fate reminiscent of the lava-buried victims of Pompeii.

So who's behind these wildly exaggerated visions of Portland reflected in the national media? Well, for one, the Portland Police Bureau (PPB), who between May 29 and November 15, 2020 declared 30 demonstrations as “riots." Apparently all it takes to declare "a riot" these days is a very small percentage of a crowd throwing plastic water bottles and shaking fences.

Fueling the click-bait desires of national media outlets like FOX News, in August 2020, then new Police Chief Chuck Lovell penned an op-ed for the New York Times, spreading disinformation nationwide about Portland’s “violent” protesters, even while his own officers were committing the lion’s share of violence.

Lovell was joined on the national stage by former Portland NAACP president E.D. Mondainé who, in the opinion pages of the Washington Post, tried to push the narrative that last summer’s protests were less about Black lives and more about “white spectacle.” As for whether or not Mondainé is a trustworthy narrator… well, I’ll just leave this article right here.

But there has also been plenty of negative (albeit more subtle) messaging from the local media, repeating baseless claims that the once-vibrant downtown corridor has been hijacked by dangerous homeless folk and window-breaking looters.

For example, check out this story from last week’s Oregonian: "Majority of Downtown Business Owners Say City Core Is Unsafe"—an article based on the findings of a poll commissioned by... downtown Portland's biggest business lobby. (What's more, the poll is based on data collected from a paltry 10 percent of downtown Portland's 3,200 businesses).

While the disinformation campaign waged by the police has helped drive a lot of anti-Portland sentiment nationally, it's been downtown business interests (led by Portland Business Alliance lobbyists) who have been pushing this message locally, waging a non-stop crusade to amplify random acts of graffiti and window-breaking and portray it as full blown crisis. Decrying acts of property destruction and homelessness, these wealthy business owners, lobbyists, and real estate brokers have repeatedly portrayed Portland as unsafe for shoppers, employees, and visitors. Oh, and sure... COVID could be partially to blame... but why bring that up as a cause for economic woes? It doesn't exactly fit with their messaging.

Which brings us around to tourism. According to a study obtained by Travel Portland, the city welcomed 8.8 million visitors in 2019 who then spent a whopping $5.6 billion during their stay (much of it downtown). For years, tourism has been a boon for Portland’s economy, creating and sustaining 36,930 local jobs in 2019 alone, and generating $1.6 billion in employment earnings. Flash forward to now, and I only have this to say: POOR TRAVEL PORTLAND!

Can you even imagine how Travel Portland—whose sole reason for existence is to attract tourists to our city—is feeling right now? Sure, it's the pandemic that's currently keeping everyone away, but what about later this year, or next summer? Their efforts to rebuild tourist revenue—money that benefits everyone, but especially downtown business owners—is under constant attack by misinformation-spewing organizations who are seemingly determined to promote Portland as a living hellscape, each for their own reasons.

Parsing out why the cops (or specifically the police union) want to spread this false narrative is easy: They don't want their budget cut, or to make any substantial changes—especially those connected to systemic racism or brutality. They rely on your continuing fear for their existence.

But what about downtown business organizations, such as longtime backroom dealers, the Portland Business Alliance or the newer Rose City Downtown Collective? What do they stand to gain from degrading Portland's national reputation?

I'm 99% certain there is a deliberate and expensive PR campaign under way rn to paint Portland, especially downtown, as a violent, unsafe mess and it's disingenuous, untrue, and serves to pressure lawmakers to give handouts to big businesses and developers. Don't buy it.
— Damon Motz-Storey (they/them) #BlackLivesMatter (@DamonMotzStorey) January 29, 2021

Whether Motz-Storey is correct or not about a “deliberate” PR campaign (and there’s certainly circumstantial evidence to suggest they may be right), it makes a lot of sense. And if true, every small business owner and elected official in Portland should seek to root out and shut down these liars—just as we would for those who spew right-wing conspiracy theories. Because these thoughtless downtown groups, in a short-sighted attempt to obtain tax payer hand-outs and increase their personal wealth while others suffer, are destroying Portland’s reputation and, in the longterm, creating a monster that—if tourists refuse to return—will also destroy themselves.

Good riddance to bad rubbish? Unfortunately, they’ll also drag the rest of Portland’s economy—including thousands of small businesses and their employees—down with them as well.

But since when have they ever cared about anyone but themselves?