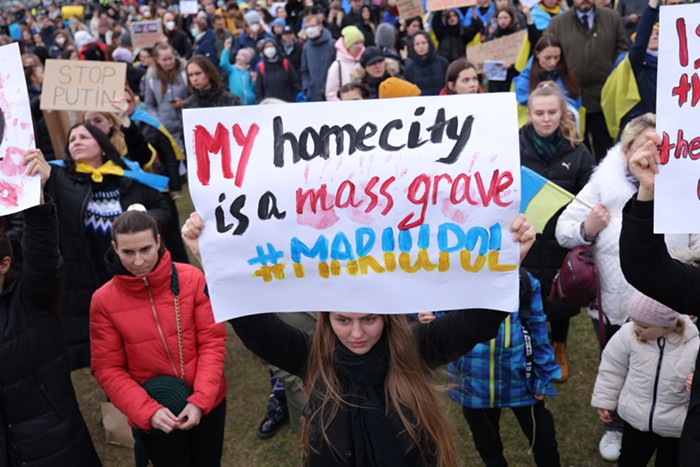 • When in doubt, fear monger about Portland! At least, that’s what the incumbent Washington County District Attorney is doing. Facing a tight race with a more progressive DA candidate, Washington County DA Kevin Barton is arguing that he is "the only barrier keeping suburban Washington County from descending into Portland-level lawlessness.” Get a grip, Kevin.

• Incumbent Commissioner Jo Ann Hardesty—city council’s biggest police reform advocate—is facing big money-backed Vadim Mozyrsky in a bid for reelection this year. So, how does Mozyrsky view the state of policing in Portland? Mozyrsky, who sits on Portland’s community-led police oversight committee, believes that a “handful of cops” and “bad apples” are responsible for upholding institutional problems in the police bureau, BUT also has not been supportive of committee recommendations for strong police accountability measures—the kind that would actually weed out those so-called “bad apples.”

• Joe's in town! Here's what his itinerary looks like:

• The US Capitol was evacuated Wednesday evening after Capitol Police identified a threatening aircraft in the area. Turns out, the “threat” was a plane carrying members of the US Army who parachuted into the nearby Nationals Park as a pregame show. The military apparently failed to notify the Capitol Police of the flyover and demonstration.

• Legislators in New Jersey, the only other state where drivers cannot pump their own gas, are leading an effort to add self-serve gas options amid rising gas prices. A new bill would give a discount to anyone who pumped their own fuel because it would decrease the number of gas attendants required at any given station. According to the Bureau of Labor and Statistics, the number of gas station attendants in New Jersey has not yet rebounded from the early days of the pandemic, causing some stations to reduce service hours because of the labor shortage.

The Justice Department plans to make tweaks that would significantly increase the number of Black and Hispanic men in prison who are eligible to take educational classes or work-life programs that could lead to an earlier release. https://t.co/zRs3dvcijZ
— NPR (@NPR) April 21, 2022

• ICYMI: The US Justice Department is appealing the recent ruling by a federal judge that lifted the mask mandate for public transportation. According to the DOJ, the appeal hinges on the Center for Disease Control and Prevention’s determination that wearing a mask “remains necessary to protect the public health.”

• Russian President Vladimir Putin is claiming Russian forces have successfully overtaken Mariupol, despite ordering his troops not to storm a giant steel plant in the Ukrainian city in fear of loosing more troops and resources. Ukrainian forces have holed up in the labyrinth of tunnels and bunkers at the steel plant and refused to surrender. While Russia now controls majority of the city including its major ports, Ukrainian officials point to the steel plant as evidence that Russian forces cannot claim victory over Mariupol.

BREAKING: President Biden announced he has approved an additional $800 million in military aid to help Ukraine fight back against the Russian invasion, but warned Congress will need to approve additional assistance. https://t.co/lwAg2c2xii
— The Associated Press (@AP) April 21, 2022

• And finally, congratulations to Taylor Swift who has achieved the highest honor one can be awarded: Having a millipede species named after you.

Taylor Swift has countless Grammys and American Music Awards, but this new honor will be a first for the global pop star. https://t.co/M92jshciyN
— CNN (@CNN) April 21, 2022