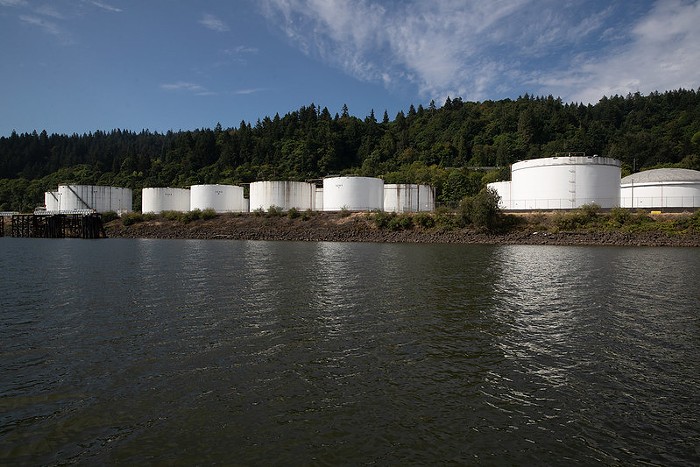 Zenith’s facility stores oil that arrives by train and ships it out from a dock in Northwest Portland’s industrial zone on the Willamette River. The facility has been under scrutiny from city officials and environmental activists for years for its contribution to climate change. Portland City Council banned the expansion of fossil fuel infrastructure in Portland in 2016, but Zenith has still been able to increase the amount of oil it ships out of Portland because the facility owners applied for construction permits prior to the ban. Zenith has quietly increased its crude oil imports since 2017, all while telling city officials it was phasing out oil transportation in favor of diesel distribution.

When Zenith had to renew its air permit from the Oregon Department of Environmental Quality (DEQ) in 2012, the city was provided an opportunity to intervene in the facility’s operations. The DEQ didn't actually start processing Zenith's air permit renewal application until 2021 due to a severe backlog at the agency. As part of the renewal process in early 2021, the DEQ gave city officials an opportunity to determine whether or not the facility’s operations were still in line with Portland’s updated land use policies. In August, Portland officials decided that Zenith’s transport of crude oil was not in adherence to the city’s climate goals and denied the company a land use permit it needed to obtain the DEQ air permit. Without an air permit, Zenith cannot legally operate.

Zenith challenged the city’s decision in October, sending the case to the Land Use Board of Appeals (LUBA). In February, LUBA affirmed the city’s right to deny Zenith the land use document, prompting Zenith to appeal that decision to the Oregon Court of Appeals.

On Wednesday, the Oregon Court of Appeals affirmed LUBA’s decision.

"Yet another court has made it clear that large fossil fuel corporations cannot expose Portland’s residents and environment to unreasonable risks and expect their projects to be rubber stamped by local governments,” said Nick Caleb, an attorney with environmental organization Breach Collective. “Zenith’s operations are clearly incompatible with Portland’s comprehensive plan and land use laws.”

This decision doesn’t mean that Zenith’s permit has been officially denied, however. The case now goes back to where it left off following the LUBA decision. While LUBA ruled that the city has the right to deny Zenith the land use document the company needs to obtain an air permit from the DEQ, the city must provide additional information to support its argument. LUBA did not give the city a deadline to provide that additional information by.

Zenith, however, can also appeal the Oregon Court of Appeals decision to the Oregon Supreme Court. The company must appeal the decision within 35 days.

A Zenith representative did not immediately respond to the Mercury’s request for comment. Following the LUBA ruling earlier this year, Zenith emphasized its planned expansion into importing renewable fuels. The company argues that, by transitioning to importing more renewable fuels, Zenith’s operation will actually help Portland reach its climate goals.

“With approvals from the City and Oregon Department of Environmental Quality, Zenith Energy can continue to transform its existing Portland fuel terminal to a majority of renewable fuel in just five years combined with the elimination of the storage of crude oil,” Grady Reamer, Vice President of U.S. Operations for Zenith Energy, said in a press statement following Zenith’s appeal of the LUBA decision in February. “We are committed to working with the City to assist it in meeting the energy and climate goals.”

For many environmental activists, the concern is not just Zenith’s imports and exports of fossil fuels, but the fact that the company’s oil trains run through Portland neighborhoods, where they contribute to air pollution and pose a threat of derailing in residential areas.

“The City of Portland did the right thing when it denied Zenith Energy’s application to continue bringing dangerous fossil fuels through our neighborhoods,” said State Representative Khanh Pham following the LUBA decision. “The City should continue to uphold its commitments to climate justice and continue the fight until dangerous fossil fuels are no longer being transported through our community.”