Speculating about how the US will crack apart is a cottage industry for sci-fi authors and political commentators. Ernest Callenbach did it in 1975 with Ecotopia, a novel about the Pacific Northwest seceding from the rest of the country. In 1981, journalist Joel Garreau argued that the US was several different nations stitched together in his book, The Nine Nations of North America. Colin Woodard made a very similar argument in his 2012 book, American Nations, which posited that the US is divided by culture, religion, and political ideology.

After the Revolution (AK Press) is journalist and podcaster Robert Evans’ attempt at carving up the American map. Like Callenbach, Garreau, and Woodard, Evans argues that some parts of the US are, simply, fundamentally different from each other. This supposedly unified nation contains irreconcilable contradictions, and there’s a whole lot more e pluribus than there is unum. Unlike those other authors, though, Evans makes his point with cyborgs, drugs, and over-the-top military hardware.

Evans is best known for the popular Behind the Bastards podcast, where he holds forth on why various historical and political figures were or are awful people. Given his podcast work and persona, I went into After the Revolution fearing that it would be didactic, the kind of science fiction where the author wants to make arguments first and tell a story second. Science fiction books like that (looking at you, Heinlein) are a tough read—even when you agree with the author’s point.

Fortunately, After the Revolution isn’t preachy, political sci-fi. Mostly. There is some speechifying and inelegant prose about war, religion, and government, but for the most part it’s a pulpy, fun, action ride where lots of rad shit explodes. 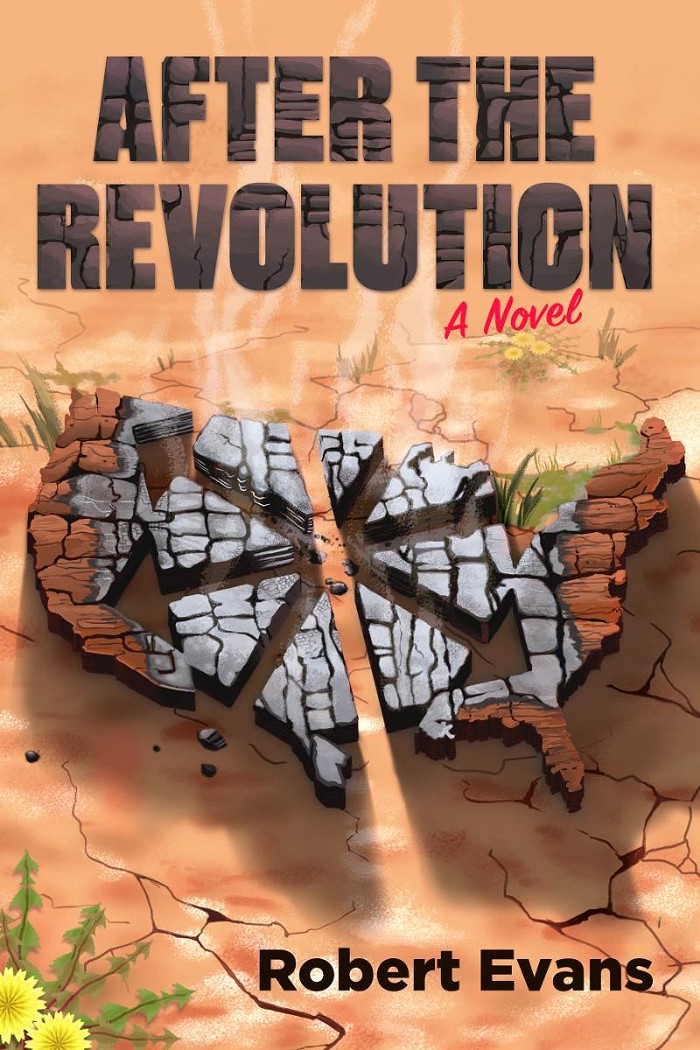 In Evans' speculative future of 2070, a new civil war has destroyed the US as we know it. North America has shattered into various subunits. The American Federation, a successor state to the US, is markedly less powerful than its predecessor. Cascadia is independent, Indigenous tribes have retaken territory, Mormons rule Utah outright, and for some reason Albuquerque is a monarchy.

Texas, where the novel takes place, is a bloody battleground that hosts various factions. There’s a Burning Man-esque mobile party city (home to anarchist cyborgs), the free city of Austin, and a Christian fundamentalist theocracy that resembles a more well-armed version of The Handmaid’s Tale. Even though the war that destroyed the US is over, the fighting hasn’t ended. America’s remnants are hell-bent on destroying each other even further, and zealous theocrats are eager to cleanse the continent.

After the Revolution's three main characters are very much stock types, and at first glance they are a liability for the novel. Manny is an everyman who dreams of escaping his war-torn home. Roland is a badass loner with a mysterious past. Sasha is a naive idealist destined to have the scales fall from her eyes. These are all characters you’ve seen before in all kinds of media.

However, Evans uses these basic types well, like a talented chef making a nicely-executed grilled cheese sandwich. It’s basic, but it’s basic done right. Evans also clearly has a political and philosophical point of view, and he mostly expresses it via empathy for his characters and their experiences. He does not simply info dump about the state of his fictional world, he makes it real and felt for the people the reader follows, and that makes the politics of the world feel more alive than any kind of sermonizing would. The political situation of After the Revolution is meaningful not in the abstract, but for the immediate, personal experience the novel situates us with.

And the book moves. This is the type of novel where nudist cyborg super-soldiers ride robot horses into battle against bloodthirsty theocrats. Stuff blows up. More stuff blows up. Dudes kill other dudes and then even more chaos ensues. The action all works. Other authors have spilled a lot of ink over America’s internal contradictions, but After the Revolution is unique in its gusto.

Robert Evans speaks at Powell’s City of Books tonight, Tuesday May 3, at 7 pm.

Joe Streckert is the author of Storied & Scandalous Portland, Oregon: A History of Gambling, Vice, Wits, and Wagers. He writes about books, history, and comics.
If you enjoy articles like this, please help the Mercury continue our mission of providing up-to-the-minute information, progressive journalism, and fun things to do in Portland by making a small recurring monthly contribution. Never forget: Your help is essential and very much appreciated!
CONTRIBUTE NOW