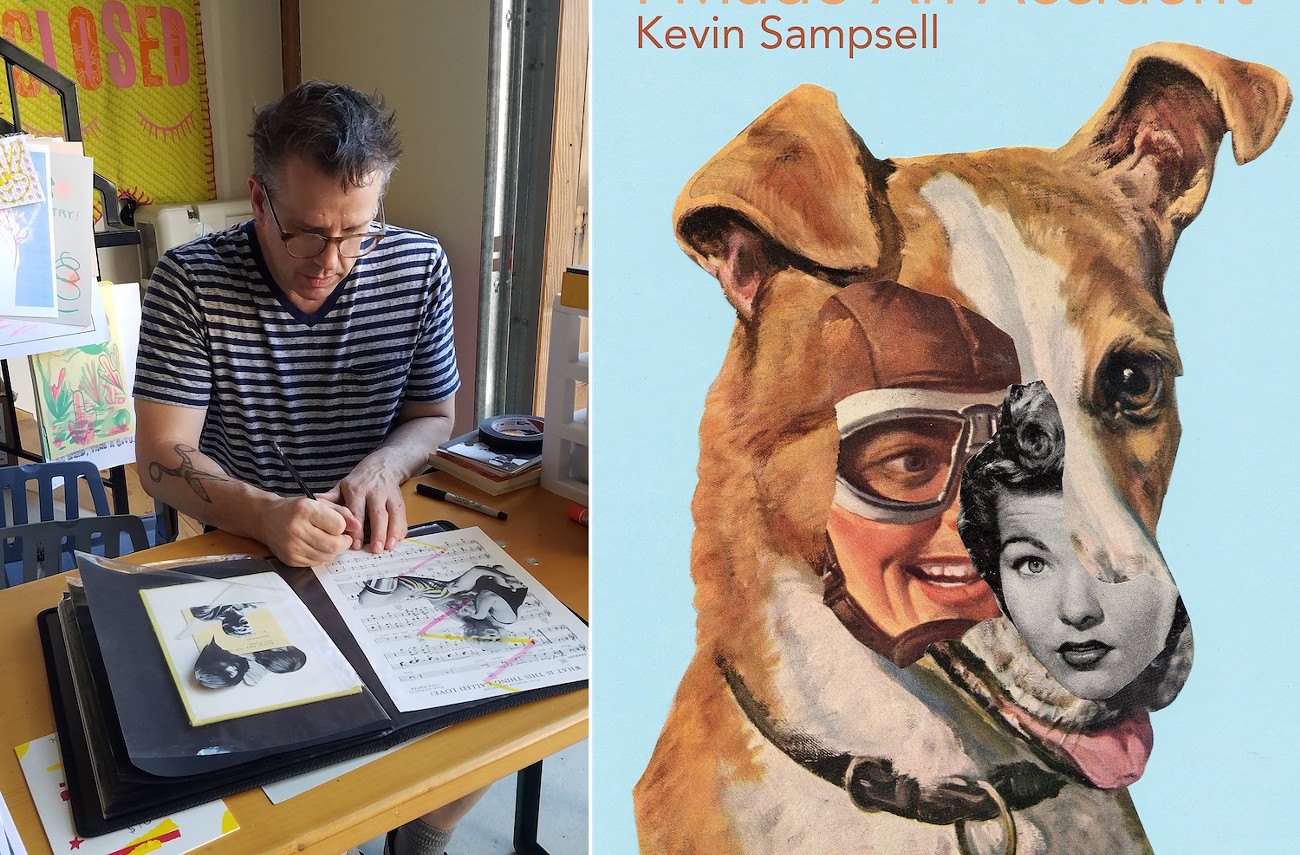 Kevin Sampsell works on a collage in 2018 (left), cover of I Made an Accident (right) Author photo by Evan Clayton Horback

Kevin Sampsell sees collage as a punk art form, so he wouldn’t mind if readers cut up his new book and added it to their scraps. The local author, Future Tense Books publisher, and past Mercury contributor is a known force in our city’s literary scene—you’ll see him introducing most reading nights at Powell’s where he is the events coordinator.

But in addition to his passion for poetry and prose, Sampsell has a seven year creative practice of collaging found media—liberating it from its original context and imbibing it with fresh meaning. His latest book I Made An Accident (Clash Media, 192 pages) is a sampling of nearly 200 collages, placed alongside more than two dozen of his original poems. The result is a jubilant celebration of bizarre, jarring, and defiant imagery.

Sampsell found collage art in 2014, while struggling to write the follow-up to his novel, This Is Between Us. He had dabbled in the practice years prior, inspired by William S. Burroughs’ style of cutting up typed stories and rearranging the phrases, but when he returned to it, he gravitated towards artists like Stella Marrs, Jenny Holzer, and Barbara Krueger.

After finding an online community of collage artists, Sampsell started an Open Collage Night at the Independent Publishing Resource Center—which still happens on a monthly basis although he no longer hosts it. He also now co-curates a digital art gallery, Sharp Hands Gallery, dedicated to digital and analog collage.

I Made An Accident is organized into seven chapters. As they progress, the most noticeable change is Sampsell moving away from incorporating text in a meaningful way—by Book Smog he's just using it for backgrounds and texture. Beauty of the Dance contains pieces Sampsell was working on right up to his publishing deadline. Throughout the month of August, some of the original collages are on display in Powell's City of Books third floor Basil Hallward Gallery, and that selection also includes brand new, recently completed works.

Sampsell's collages hit plenty of the visual metaphors that are easy to appreciate—e.g., animal heads on human bodies, clashes of color and greyscale images sourced from cartoons and photos—but there are plenty pieces that readers will stop to ponder.

In “I Remember 2013,” a cowboy rides on horseback through low tide while a woman’s laughing face looks down on him. Text reading “I remember / 2013 / when we ate / so many / American people,” runs down the side of the page. “Your Old Emails” depicts a severed hand with its fingertips burning like candles—a Hand of Glory—but the piece's titular phrase is taken from a newspaper headline.

Other works in the collection are absurdist gags, demanding no more of the reader than bemused laughter. "Marigold" shows two smiling white women canoeing through an alpine field of dandelions, while "New Grammar of French Grammars" places a vintage self-defense illustration —of a woman kneeing a man in the groin —onto a French textbook's introduction page.

“One of the most exciting parts about collage is finding these peculiar images in these books that are kind of forgotten things,” Sampsell told the Mercury.

Sampsell’s love of vintage media makes the appearance of people from marginalized communities in his work rare. He says that whenever he does encounter clips depicting people of color, LGBTQ+ people, and people with visible disabilities, he takes care not to distort their form.

“When you’re using underrepresented images, you don’t want to make it ugly,” Sampsell said. “There’s a mission to make [the collage] beautiful and wonderful.”

In contrast, the collection's most difficult image, “Nazi Party,” places black, white, and pink polka dots onto historical color photos of a Third Reich military parade. An illustrated white woman, pulled from a same era soda ad, walks past while pouring a soft drink. Her wide eyes and full, toothy grin take on an unavoidably sinister context. Sampsell says the image's dark humor compares the morality of Hitler's Germany to American ideals championed in commercials, and the xenophobia deemed acceptable by both societies at the time.

"One of the things that excites me about collage is these unexpected history lessons,” he said. “And then just cutting these things from that timeframe and from that historical moment, and fucking it up in some other context.”

Kevin Sampsell will read with Jennifer Robin at Mother Foucault's 523 SE Morrison, Sat Aug 20, 7 pm, FREE; Collages from I Made an Accident are on display in the Basil Hallward Gallery at Powell's City of Books, 1005 W Burnside, through the end of August, daily 10 am-9 pm, FREE

Tags: Books Arts Culture
If you enjoy articles like this, please help the Mercury continue our mission of providing up-to-the-minute information, progressive journalism, and fun things to do in Portland by making a small recurring monthly contribution. Never forget: Your help is essential and very much appreciated!
CONTRIBUTE NOW