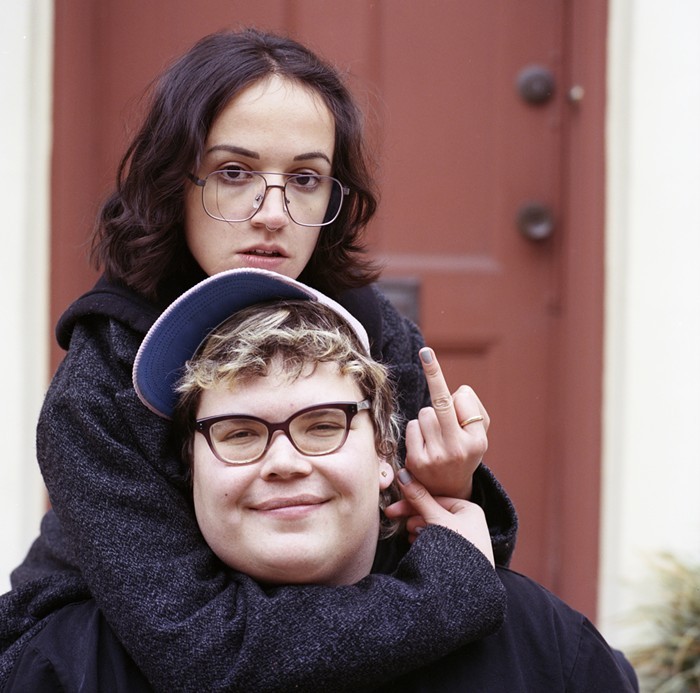 “True, but Who's on First? is actually, when you think about it, a really cogent and beautiful exploration of gender identity,” Freud said. “Like who am I first?”

Interviewing this duo ahead of their upcoming performances in Portland and Seattle felt like trying to talk to friends who only operate on the same comedic wavelength. They each built off the other’s absurdity over nearly an hour, and they rarely broke.

Freud is a longtime comedian who has written for television shows such as Rick and Morty and The Eric Andre Show. Clark, who wanted it to be known that she no longer has bedbugs and doesn’t want to elaborate on that, grew up in Seattle.

“I was hanging out with Bill Gates all the time. I did serve him popcorn at a movie theater once,” Clark said.

The duo first met where so many great friendships begin: On Twitter. They said they both connected during the pandemic over a shared sense of humor.

“At the time, I had never done comedy in my life. I was planning to stay in grad school and become Dr. April. That was what I was going to make people call me,” Clark said. “But then I met Grace, and she just assumed that I was a comedian.”

“I molded her in my image of her and am still doing it, there are a lot of twists to come,” Freud recalled.

“There are some really exciting things coming for my character in the future,” Clark added.

As for the origin of the name Girl God, it was something Freud had been holding onto for just such a moment in comedy history.

“I had it in my back pocket for a long time as a name I wanted to use on something since years ago when I lived in Chicago. I just thought it was perfect because it was so good,” Freud said.

“If anyone can come up with a better name, I’ll kill myself. Good luck,” Clark pledged.

“Yeah, if anyone can come up with a better name for what we’re doing, we are in too deep, so you’ll just make us feel bad,” Freud said.

Some fans and critics categorize the group’s humor as “alternative comedy,” a genre Clark wrly embraces.

“Since I was a very young child, I’ve always wanted to be an alt-comedian. That’s kind of been my dream for a long time,” Clark joked.

“My thing with the term ‘alt-comedy’ is it doesn’t mean anything,” Freud said.

“It means everything to me,” Clark responded.

“Wow, that’s beautiful,” Freud said. “You know what, this is my turnaround Liar Liar, The Santa Clause, end-of-movie moment. Alt-comedy actually does mean everything. I’m a proud alt-comedian now, you’ve shown me the error of my ways, April.”

After letting the spirit of alt-comedy into her heart, Freud did reflect on the extent to which the group makes their comedy palatable to others.

“I think essentially we just saw a lot of queer and trans comedy that we don’t necessarily view as comedy. We were like, ‘What if we did something together that was funny and wasn’t just empowering, or wasn’t even trying to be empowering at all?’” Freud said.

“...[Comedy] that wasn’t just about how ‘normal’ trans people are, where the punchline is we’re normal,” Clark added.

“We’re not trying to just be like, ‘Here is why trans people are just like you,’” Freud said. “Who cares?”

“Grace, I’ve been live-streaming the whole interview. I just got a message. You’re canceled,” Clark said.

“Good! We can start getting that podcast money, baby. We’ll launch that Patreon,” Freud said.


You can see Girl God on Saturday, May 21 at The Old Church Concert Hall in Portland. Tickets and more info here.
Tags: Comedy
If you enjoy articles like this, please help the Mercury continue our mission of providing up-to-the-minute information, progressive journalism, and fun things to do in Portland by making a small recurring monthly contribution. Never forget: Your help is essential and very much appreciated!
CONTRIBUTE NOW