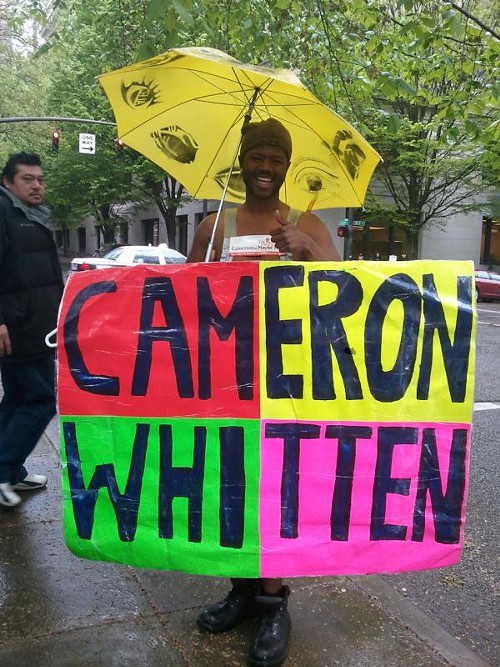 Cameron Whitten, the 21-year-old Occupy Portland participant who finished fifth in the mayoral primary this month, announced the next headline-grabbing chapter for his activism: Come this Saturday, June 2, while thousands of Portlanders are watching the Starlight Parade, Whitten will take up a position outside city hall and begin a hunger strike aimed at three housing-related issues.

He laid out his grievances in a statement this morning:

1. For City Commissioner Dan Saltzman, withdraw the fines on Michael Wright and Dan Cossette, co-owners of the Right 2 Dream Too Rest Area, and seek a peaceful resolution for this cost-free solution to homelessness for the remainder of the lease agreement.

That's not an easy list—and Whitten sent it out a day after housing issues, in the city's budget, received unprecedented political support. I mean if Whitten got his wish on just one of those demands, let alone all three, it would be a major miracle. But Whitten tells me he sees all three as essential to the success of the city and county's 10-year plan to "end" homelessness, so he'll sip water and eat vitamins "as long as physically possible."

"We've dodged the actual stuff we need to take to make that happen," he says of "ending" homelessness. "We criminalize people, we've failed to put up a housing levy, and we're not trying to fight the big foreclosure crisis."

But like I said, each of these issues is a vexing mess.

Just for example: As of last fall, Housing Commissioner Nick Fish was saying a levy might be two or three years away, and certainly wasn't contemplating this fall. Saltzman's office, which oversees the city's code-enforcing Bureau of Development Services, feels like it's stuck between a rock and a hard place over R2D2—property owners punking the city on one side, with very devoted and very successful advocates renting from those property owners on the other.

Which means it's more likely Whitten ends up in a hospital than maybe even partially victorious. As one sage housing advocate has kindly points out, people already are dying on the streets, many more than one passionate activist about to mount a hunger strike, so why would progress suddenly come any faster than it already is (or isn't)?

This kind of dramatic action is always tough for advocates who feel torn between working within the system—sometimes achieving milestone triumphs, but usually sensibly incremental ones—and going for broke by pushing for more transformational change and faster faster faster.

Whitten's of the latter mindset. He says he isn't satisfied with the current pace of reform: "We haven't tried hard enough to show how important this is for us."

So now he's prepping his stomach by eating "marginal amounts" of fruit and then he'll be at city hall, come rain or shine, this weekend. Will he sleep there? Can he have a tarp to cover himself? What will the city do?

Comments 8
Tags: Election 2012 Homeless Blogs
If you enjoy articles like this, please help the Mercury continue our mission of providing up-to-the-minute information, progressive journalism, and fun things to do in Portland by making a small recurring monthly contribution. Never forget: Your help is essential and very much appreciated!
CONTRIBUTE NOW