How to Start a Cross Country Food Fight 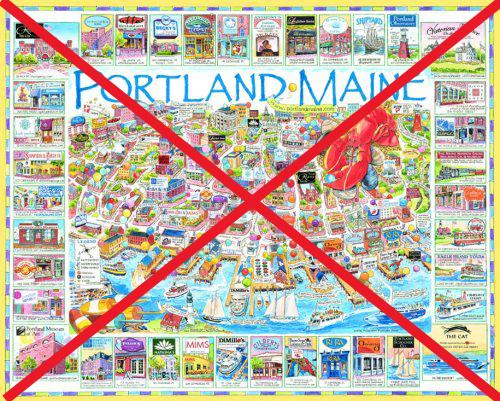 I'm not finished with Portland, Maine. Yes, I know it's not their fault that Epicurious.com called them "the new Portland, Oregon." for 2009:

Never-the-less, I quite like the idea of a cross-country Portland food rivalry, so I shall continue to bait them.

Rabelais is one of the reasons. Saveur named it one of the best cookbook stores in the country. Bartenders like Joe Ricci and John Meyers. The Death Match Kids.. The plethora of cheese makers—whatcha got aside from Rogue River? And it's now Maine Shrimp Season. Good god.
But, the writer would know all of this if he's ever visited.
-Uki Mochi

Alright then. Let's go point by point, shall we?

Ingredients. Are you fucking kidding me? How long is Portland, Maine's growing season? 120 to 180 days (at most) according to the national gardeners association. While we here in Portland, Oregon, can grow for over 200 days of the year. And yeah, you might have the oldest blah, blah, farmers market, blah, blah... But is it open through most of December? We've got produce in the Park Blocks until December 20th this year when the market shuts down for a scant three months. That's 9 months of amazing outdoor markets.

Mushrooms? We've got chantrelles, matsutakes and morels less than 20 miles away from town. Good meat? The Willamette Valley provides a shit-ton of farmland for pasture raised livestock. Cheese makers? Ever heard of Tillamook? Yeah, they're only celebrating their 100th anniversary, and they're the big guys. We've got too many small producers around here to name, but you can get a list at the Portland Farmer's Market vendor map.

Bartenders. Pshaw. We've got Lance Mayhew and Daniel Shoemaker. How many times have your bartenders been mentioned in the New York Times? And while we're talking booze: we've got a thriving micro distillery community and more micro breweries than you can shake a stick at. Ohhh yeah... We've got you beat on the booze.

I'm tempted to give you the seafood. You are after-all a port city. But... NAW! We've got salmon, baby!

I'll let the whole restaurant thing slide. After all, I haven't been to Portland, Maine. However, I am trying to arrange a little food writer exchange program. Just putting it out there... If you are a food writer from Portland, Maine, I will happily arrange for you to be hosted at some of the city's best restaurants, if you can arrange the air fare and promise to write a column about your experience for the Mercury. In turn you will do the same for me and I'll write a column in your publication. That way, the restaurant debate can be much more informed.

So, consider the gauntlet thrown, Portland, Maine. I hereby open the comments section for the throw-down. C'mon Portlander's, show your love. And please, remember this is all in good fun!

Comments 15
Tags: Food and Drink Blogs
If you enjoy articles like this, please help the Mercury continue our mission of providing up-to-the-minute information, progressive journalism, and fun things to do in Portland by making a small recurring monthly contribution. Never forget: Your help is essential and very much appreciated!
CONTRIBUTE NOW