Sweater Weather in a Glass: Fall Cocktails at New and Old Favorite Bars

“You look like a dad in that sweater.” That’s the first thing my drinking associate said when we recently met at Lovely Rita for a cocktail. Lovely Rita is the rebrand of the lobby restaurant in the Hoxton Hotel, and my sweater was a cream-colored cable knit pullover that frankly makes me look like a very cool dad. ’Tis the season, I thought, and did not buy my “friend” a drink.

I did, however, buy myself a few. It was the first time I’d worn a sweater in months, and I was in the mood for drinks that would match my coziness: warm spices, bittersweet amaros, and darkly aged spirits—even fireplace smokiness and breadily heavy ingredients would be welcome. Lovely Rita was only the beginning.

Once a Mexican restaurant, the Hoxton’s lobby bar is now an “Oregonian bistro,” and with mostly couches and intimate two-tops for seating, it comfortably splits the difference between hotel lobby and social-club bar. I have to admit I ordered drinks based on which names tickled me most, so I started with an “Old Password (but with an exclamation mark)” and it fit my Autumnal mood: a whiskey sour spiked with a fruity amaro called Pasubio, fluffed with egg white and with a sweet anchor of maple and blueberry. It’s rich, and a rich enough mahogany color you could use it to stain the new cabinets in your den ($13). God, do I have a dad vibe after all?

I followed that with another whiskey drink, the “Ladies of Tampa,” which gets some acid from a pineapple oleo and walnut liqueur but drapes it all under a heavy cloud of lapsang souchong smoked black tea liqueur ($13). It made me want to smoke a pipe while I read a physical newspaper—damn it, what is going on with my biological clock?

Then I did something shockingly adult: I got a non-alcoholic beverage. It had the most autumnal name of all—“Dusk and Drizzling”—and lived up to it: a ginger-pineapple-lime soda with some serious body due to a heavy molasses infusion ($6). I didn’t see a dessert menu, but it’d make a great float to watch the rain with.

From Lovely Rita, my frenemy and I went further into the west side to—and bear with me through all these red flags—“Portland’s first” “reverse steakhouse” called, unfortunately, G-Love. (Unclear if they have a house Special Sauce.)

Actually, every plate of food that went by me looked delicious, but we were only there for a drink. We had a “Queen Bee”—another egg white and bourbon drink, bodied up with barley and spiced with sarsaparilla, all topped with a honeycomb stencil of bee pollen—and a “Teton Tanya”: rye whiskey, sunshiny Aperol, Cynar (which on its own tastes the way yellow maple leaves look), and Becherovka (both $13). It’s hard not to think of the drink as a metaphor for Portland fall: At first it was in no way better than the sum of its parts, but as the ice watered it down it turned into something I hadn’t noticed I’d been missing.

Of course, the new kids on the block are hardly the only ones mixing drinks for the earlier sunsets. A delicious bite at last month’s Feast festival reminded me to revisit Southeast MLK’s Revelry. So on another recent fall evening, I took a visiting friend in for a “Revelry Old Fashioned”: bourbon infused with roasted corn, barley syrup, and house bitters ($11). I don’t know if it was the welcome camaraderie from a rarely seen friend or the drink itself, but I was dreaming of a fireside nightcap after Thanksgiving dinner.

Then, on the way to Lauretta Jean’s for pie, we swung by La Moule so I could wow my friend with my favorite Portland drink, the cocktail namesake of Tommy Klus’ other bar, Scotch Lodge—but I found myself pulled toward a different brown liquor: brandy. Maybe it was the weather, maybe I just had pie on the brain, but I couldn’t resist the “Heart of Pomme”—a cognac and green apple sipper with cinnamon and, why not, salted caramel ($14).

Yes, I still ate pie, and yes, Lauretta Jean’s has cocktails—a brandy spiked chai, a whiskey toddy, a... well, I had fernet. Fernet-Branca ($8) and honey hazelnut pie is a primo pairing by any measure, at any time. After all, it’s not just sweater season because it’s cold out—bring on the dad bod. 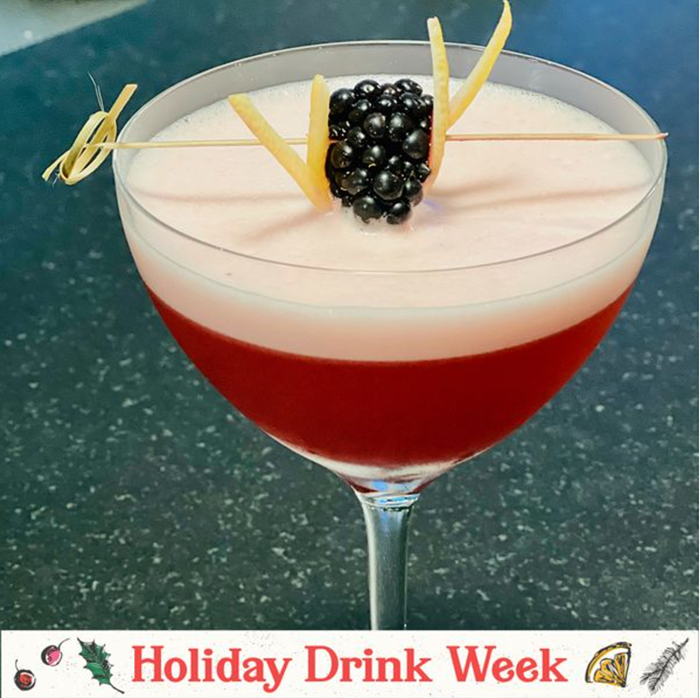