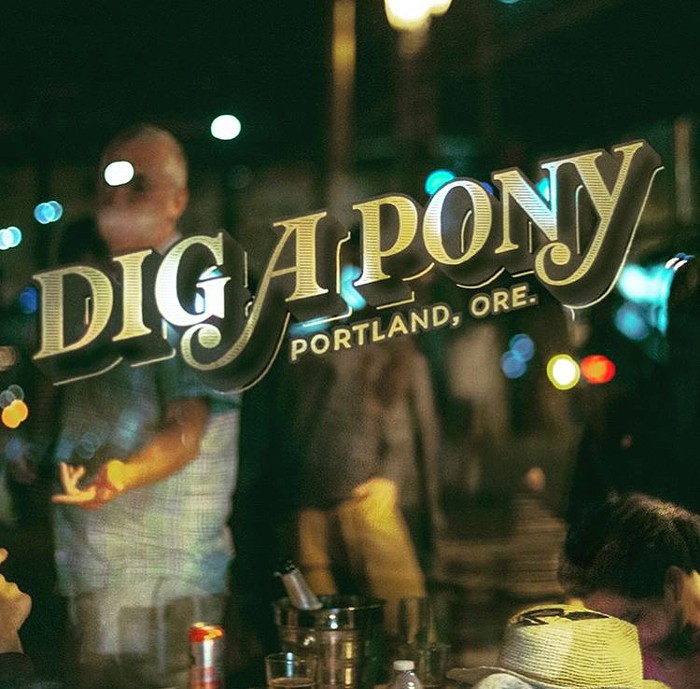 Courtesy of Dig A Pony
A bittersweet announcement came earlier this week: After being a mainstay of Portland nightlife for the last 11 years, dance club/burger bar Dig A Pony will close its doors this June.

The bright side of this development is that Dig A Pony's co-owners, Aaron Hall and Nicholas Musso, are passing the torch to their good friends and known figures in the city: Elizabeth Elder and Bryan Wollen, the force behind Lose Yr Mind Fest, and married couple Devon and Tyler Treadwell, who co-own North Portland’s Tulip Shop Tavern.

The transition happened naturally, as Elizabeth Elder tells it. She was taking classes at a Mercy Corps Women's Business program during the pandemic, hoping to eventually open up a music venue. Elder asked Hall to check out possible spaces, and a few months down the road he called her up to ask if she wanted to buy Dig A Pony. The mutually beneficial transition quickly gained momentum.

“It doesn't feel like this thing where ‘Let's communicate through lawyers' and go back and forth that way,” Hall told the Mercury. “It's been like, ‘How can we ensure that this happens in a way that's very natural, and on timelines that feel really good to everybody and in a way that feels really holistic?’”

“We never wanted to put the business on the open market. We wanted to ensure that whoever took over the space was going to do something wonderful with it, and have the same level of care and dedication that we had,” he said, describing the change as less of a business transaction and more of like a natural passing of the torch.

Courtesy of Dig A Pony
The new owners are actively working in the space and making plans, while Dig A Pony winds down their watch with a slate of epic farewell parties. They’ve already booked stalwart acts like the Noche Libre DJ crew for Cinco de Mayo. DJ Anjali and the Incredible Kid and hip-hop phenom Maarquii headline other upcoming bills. Hall says the last farewell—the final night—is slated for mid-May, but he can't yet divulge the headliner.

“We're going to roll out all of our favorite [artists and] DJs between now and when we close,” Hall said, adding: “It's all going to be free and a lot of fun—basically [we want to ] get all our friends who collaborated with us over the last 11 years to come back and do one last hurrah.”

“We've been at this for a long time and had a really great run,” Hall said. He likened the decision to the hit comedy Seinfeld's controversial choice to end following its most popular season. "We wanted to do it on our terms, while we were still thriving,” he said.

Meanwhile, incoming co-owner Elizabeth Elder is excited to make the space their own, while also paying tribute to the groundwork Dig A Pony laid. Elder says the revamp of the—as of yet unnamed—space will see the bar moved from the center of the room to make room for "a proper stage" and "eclectic, psychedelic vibe."

“We want to bring in installation art and have it be an evolving space—one where you could come in six months later and maybe there's different things in there," she told the Mercury.

Southern- and New Orleans-influenced Chef Nick Seabergh will lead the kitchen, with a po’ boy-heavy menu, hush puppies, and other comfort food snacks. Devon Treadwell will bridge the gap between kitchen and the bar, which Tyler Treadwell will oversee. Based on what we know of Tulip, a good beer selection is imminent. The other beverage intelligence is that boozy daiquiri slushies will be a focus—made in batches and poured quickly for fast and easy service.

The Lose Yr Mind team plans to handle the venue side of the business, with Elder booking and curating. Bryan Wollen—who is currently head of sound at Kelly’s Olympian—will look after the space's audio engineering.

“There's been a gap in the Portland venue landscape for really good-sounding, small rooms of about 200-person capacity," Elder explained. "There are a lot of really great rooms that are smaller than that, but there's not a whole lot around [this size]. We're really excited to use it as an incubator room, to help bands get to the next level.”

Elder emphasized that the new venue will feature a wide range of musical genres, bringing curators in to book everything from rock, jazz, and house music—continuing Dig A Pony’s tradition of hosting DJs. Concertgoers can expect back-to-back programming.

“Earlier in the evening there might be a live band concert. Then afterward, we’ll have a DJ for more of a dance party, kind of expanding on what Dig A Pony already did,” she said.

“Kind of like Musicfest Northwest, you'll get a wristband and walk around to a bunch of venues in Inner Southeast,” she said. Of course, her new venue will be one of them.