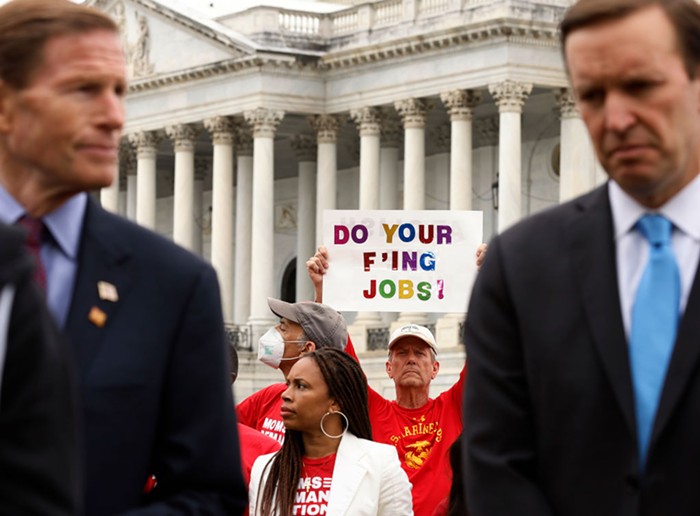 A gun control rally outside the US Capitol. Chip Somodevilla / Getty Images
Good Morning, Portland! Weather wise, we’re looking at a warm, cloudy day with rain starting this afternoon. Now for the headlines.

• Oregonians may see a measure creating stricter requirements for gun purchases on the ballot this November. Lift Every Voice Oregon, an interfaith nonprofit, is trying to get a measure on the ballot that would require a complete background checks, firearm training, and advanced permit to buy a gun in Oregon, as well as ban the sale of high-capacity magazines. The group has six weeks to collect at least 60,000 signatures to get the measure on the ballot.

• Portland police detective Erik Kammerer is being sued for the way he treated members of the public during racial justice protests in 2020. This is the third (!!) time Kammerer has been named in a lawsuit for his treatment of the public during protests. "Frankly, it just pisses me off that it's left to the public to build cases against problem officers,” said attorney Juan Chavez. “We shouldn't be the last line of defense on these issues.”

• Fun food news: Portland will be featured on the upcoming season of Netflix’s “Someone Feed Phil.” Filmed in the summer of 2021, show host Phil Rosenthal visits Fried Egg I’m in Love, Matt’s BBQ, DesiPDX, Kachka, Han Oak, Ruthie’s, Tov Coffee, and Doe Donuts throughout the episode. By the end of the episode, Rosenthal decrees that Portland is one of the best food cities per capita he's visited.

• Oregon’s congressional delegates have been outspoken following the mass shooting at a Texas elementary school earlier this week calling for stricter gun laws—all except for one. Representative Cliff Bentz, the state’s sole Republican congressman, has not made any public comment about gun laws in the wake of the tragedy and ignored several emails from the Oregon Capital Chronicle asking about gun control legislation he supports. You can read how all of the other state delegates responded to the Chronicle’s questions here.

A federal trade investigation, which could last months, is threatening solar projects scheduled to be completed, state and U.S. climate goals contingent on solar development, and thousands of jobs in the industry. By @Bradley_W_Parks: https://t.co/vFKbAJjV5I
— OPB (@OPB) May 25, 2022

• Local law enforcement is facing increasing scrutiny over how long it took them stop the gunman at a Texas elementary school Tuesday. Witnesses near the school said that parents were held outside the school by police while the gunman was inside the building, seemingly still killing students and teachers. Parents were urging the police to storm the building. Various state officials made conflicting statements, some saying that the tactical team stormed the school immediately and then had difficulty breaching the classroom the gunman was in, while others said it took 40 minutes to an hour after the shooting started before the tactical team went inside the school.

• In statements following the shooting, Texas Governor Greg Abbott has rejected the idea that stronger gun control laws could have prevented the school shooting. Instead, Abbott said that “we as a state, we as a society, need to do a better job with mental health.” Just last month, Abbott slashed $211 million from the state department that oversees mental health programs.

• Transphobia alert: Montana Governor Greg Gianforte’s administration introduced an emergency rule barring transgender people from changing the sex on their birth certificate even if they undergo gender-confirmation surgery. The rule openly defies a court order that temporarily blocked the Governor’s attempt to restrict transgender rights. The administration is arguing that they are changing from recording gender on birth certificates to recording sex, which they argue is “immutable” and cannot be changed. Tennessee, Oklahoma, and West Virginia have similar restrictions against changing brith certificates.

• Let’s end with some animal cuteness today. Firefighters in New Mexico rescued a newborn elk from a wildfire and named it Cinder. Cinder has been transferred to a rehab facility and paired with a surrogate elk so that it can be released back into the wild.

Firefighters have rescued an abandoned newborn elk from a large wildfire in New Mexico. They've dubbed the calf "Cinder." The rescue evoked events 70 years ago in the state involving a scalded black bear cub — the fire prevention mascot “Smokey Bear.” https://t.co/MK4QpuNSh0
— The Associated Press (@AP) May 26, 2022