One Day at a Time

This week saw the final presidential debate (THANK GOD), in which an entire nation was forced to sit down, clench their fists, grit their teeth, and stare straight ahead for a solid 90 minutes as Hillary Clinton and Donald Trump went at it one last terrible, horrible, no good, very bad time. And go at it they did, fighting about everything from abortion to why The Apprentice never won an Emmy. (Welcome, dears, to America in 2016: Just What the Founding Fathers Intended™.) We are, of course, ever so slightly biased toward Clinton (as is everyone who isn’t a morally bankrupt idiot), so we felt she did quite well, all terrible, horrible, no good, very bad things considered. HOWEVER... As James Poniewozik pointed out in the New York Times, Trump—who is all but guaranteed to lose the election—might have had a different goal in mind than “winning.” “Earlier in the week, the Financial Times reported that Donald J. Trump’s son-in-law had met with investors about possibly starting a television network,” Poniewozik noted, before adding that leading up to the debate, Trump’s Facebook page turned into a “ramshackle pregame show [that] was like state television produced by QVC, with interviews by, of, and for Mr. Trump’s supporters, cable-news-like graphics, and a relentless sales pitch.” IN OTHER NEWS... So, even when Trump loses this thing, he’s not going away. He’s just going to go back to being a reality star—one with entirely too many morally bankrupt idiots tuning in to his garbage all day, every day. America in 2016: Just What the Founding Fathers Intended™.

BREAKING! BREAKING! Someone else hates Kanye West! “But how could this be?” you ask. “I thought everyone on the planet already hated Kanye!” A-ha! Sounds like someone has forgotten about Kanye’s friendship with Jay Z, as witnessed when the BFFs teamed up for 2011’s Watch the Throne. BUT! Could their friendship be... a ruse? “Jay can’t stand him,” a source tells Page Six. “He looks at him as this crazy, eccentric motherfucker he can tolerate in small doses. Kanye is a nut job. Everyone knows that.” But then how to explain Watch the Throne? Well, pretty easily: The source adds that Jay “tolerated” West because “there was so much money to be made. Jay was like, ‘I’m gonna knock this out, We’re going to do a tour to bring in millions of dollars. I can tolerate that.’” MEANWHILE... A source close to Kanye disputed the allegations, claiming West and Jay Z are “closer than friends. Jay appreciates Kanye’s genius, understands his passions and eccentricities, and is accepting of it all.” IN RELATED NEWS... One of these sources sounds pretty reliable! The other one sounds like Kanye West. We’ll let you decide which is which.

This week, everybody’s favorite part of Atlanta, Community, and Magic Mike XXL—that’d be the charming, handsome, talented, and hilarious Donald Glover—was cast as Lando Calrissian in one of the upcoming Star Wars movies. (We suppose this means they’re still making Star Wars movies? Ugh.) Naturally, Hubby Kip spasmed himself into oblivion at the news, by which we mean he repeatedly tried to tell us what a Lando was. “Annie, this is such amazing news!” Kip shouted from his nerd nest in the basement, even after we’d slammed shut and deadbolted the door. “Do you think we’ll finally find out more about Lando’s past—such as what, exactly, constituted his legendary maneuver at the Battle of Taanab? Or how he became Baron Administrator of Cloud City on Bespin? Or just what mistake he made in that fateful game of sabaac that forced him to give the Millennium Falcon to Han Solo? Annie, can you hear me up there? Ann—” IN RELATED NEWS... The door’s still locked, and we’re using this news as an excuse to line up a row of martinis, put on Magic Mike XXL, and invent a new drinking game. Join us, won’t you? If we do this right, we’ll be drunk before that scene set to Ginuwine’s “Pony” even starts.

And now let us check in on the marital trainwreck known as Brangelina. As you recall, Angelina Jolie filed for divorce from hubby Brad Pitt and is requesting sole custody of the couple’s mob of children. Why? Because Angie thinks Brad spends too much time huffing down bongs (that’s what you do with pot, right?) while watching 17 straight hours of SpongeBob SquarePants. Meanwhile, Brad’s game plan is to get joint custody over the swarm of kids—included son Maddox, with whom daddy Brad allegedly got “physical” on a flight from Paris to LA. According to TMZ, yesterday Brad (in the presence of a therapist) met with Maddox for the first time since the in-flight altercation, so they could have what was surely an awkward conversation of epic proportions. We think it went down like this... BRAD: How are you, son? MADDOX: [Doesn’t respond, continues thumbing through Snapchats.] BRAD: Maddox, I’m talking to you. MADDOX: [Mumbles incoherently under his breath.] BRAD: Please son, can you put the phone down, I’m just trying to.... MADDOX: LIKE OMIGOD OKAY JEEZ LIKE WHATEVER YOU’RE LIKE THE WORST DAD IN THE HISTORY OF THE WORLD I HATE EVERYTHING! BRAD: [to therapist] Y’know, I’m just going to sit over there, huff down a bong, and watch some SquarePants. Care to join me?

According to film star Salma Hayek (Frida, Desperado), walking bag of moldy oranges Donald Trump once tried to trick her into going out with him—by planting a false story about her in the National Enquirer. In a radio interview, Hayek explained how Trump buddied up to her then-boyfriend in order to get her number. (UGH!) When Trump called for a date, she immediately reminded him that she had a boyfriend, and politely declined. How did Trump respond? “Someone told the National Enquirer,” Hayek said in the interview. “I’m not going to say who, because you know that whatever he wants to come out comes out in the National Enquirer. [The story said] he wouldn’t go out with me because I was too short.” Wait... what? But... oh forget it, it’s Donald Trump. It probably made sense to him. But here’s where it gets extra devious! “Later [Trump] called and left me a message, saying ‘Can you believe this? Who would say this? I don’t want people to think this about you,’” she continued. “He thought I would try to go out with him so people wouldn’t think that’s why he wouldn’t go out with me.” Thank you, Salma Hayek for that short, guided tour into how the Trump brain works. Now excuse us while we wash ourselves off with a pressure hose.

But before we hose ourselves off, could it possibly be that we should consider being a bit thankful for Trump’s particular brand of hateful divisiveness? As you surely recall during Wednesday’s debate, Trump interrupted Clinton’s discussion of her social security plan by calling her a “nasty woman.” This launched a fuselage of justifiably outraged feminist response on the internet, as well as this particularly pointed look at the big picture from Vox writer Liz Plank. “In that moment, Trump did for Clinton what she hasn’t been able to do with female voters: He made her relatable,” Plank wrote. “Nearly every woman has experienced a version of the nasty woman moment... whether it was by an ex-boyfriend or boss at work, women immediately picked up on the insult, and knew exactly what it was like to be in Clinton’s shoes.” It’s a sad fact that real progress often doesn’t happen until the worst possible circumstances (like Trump) slap a complacent America right in the face, awakening and forcing them to accept the truth. And with that, we now return to our pressure wash shower.

Guys! Why can’t you just give Justin Bieber what he wants, exactly when he wants it? YES, Bieber loves fame, fortune, and the adulation of millions... but can you just be a bit quieter about it? While performing tonight in Manchester, England, Der Biebles dropped his mic and stormed off the stage because the crowd wouldn’t stop screaming. “I appreciate all the support, I appreciate love, I appreciate the kind things,” Bieber said before leaving the stage. “But the screaming has got to stop. I don’t think it’s necessary when I’m trying to say something and you guys are screaming.” Dear Justin Bieber: Have you ever been to a Justin Bieber concert? Oh, that’s right... you’ve been doing them since you were 15 FUCKING YEARS OLD. But by all means, do try to tell your audience—who paid good money to be entertained, not mansplained—how they should feel and react to your royal presence. Because when you do, we’ll only have one thing to say about it: SQUEEEEEEEEEEEE!!!

Tags: Gossip Ann Romano One Day at a Time humor
If you enjoy articles like this, please help the Mercury continue our mission of providing up-to-the-minute information, progressive journalism, and fun things to do in Portland by making a small recurring monthly contribution. Never forget: Your help is essential and very much appreciated!
CONTRIBUTE NOW 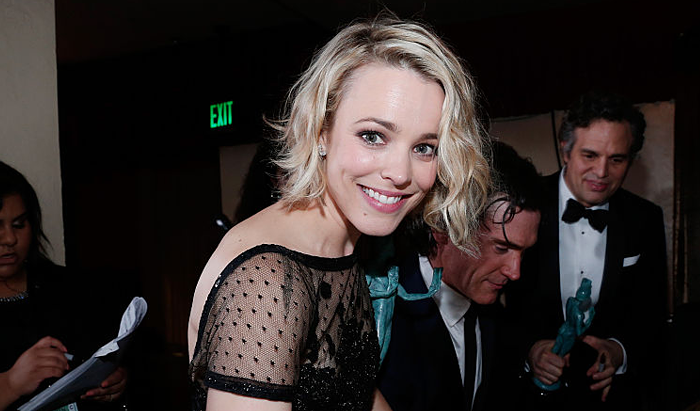