If you’ve never heard of the Great Pacific or Eastern Pacific Garbage Patch, it’s an area nearly the size of Texas, that is completely filled with floating and disintegrating plastic marine debris, trapped by the North Pacific Gyre. If you want to know the details, the Algalita Marine Research Foundation is very informative.

But the truly exciting part about this garbage patch is that a it has inspired a British banking billionaire, David de Rothschild, to build a boat completely from plastic waste and to sail it through this patch, across the Pacific Ocean. He says it’s to raise awareness about the importance of being eco-friendly and keeping oceans clean. However, my favorite parts of this project (called Plastiki) are that 1) it has proven far more difficult to build a boat out of plastic waste than the billionaire originally imagined and that 2) de Rothschild is ENTIRELY convinced that this is a super EXTREME adventure that will bring TONS of awareness about the environment, despite the fact that this is not the first voyage of its kind. Maybe it’s cruel to laugh at an adventuring adrenaline junky who wants to use his fortunes to save the world and is finding it’s not easy. But I enjoy it. And you can too! Check out the Plastiki site or read about his vision here and here. He was scheduled to launch today, but has been delayed to the vague date of "Summer 2009." Don't you just hate when your big plans to get sponsors to build a boat so you can go sailing all summer go awry? ...I guess it’s also a rather a decent idea that might change the way we build boats from now on, but who cares about that. 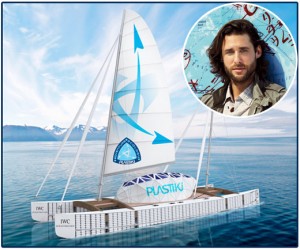 Comments 4
Tags: Green Blogs
If you enjoy articles like this, please help the Mercury continue our mission of providing up-to-the-minute information, progressive journalism, and fun things to do in Portland by making a small recurring monthly contribution. Never forget: Your help is essential and very much appreciated!
CONTRIBUTE NOW