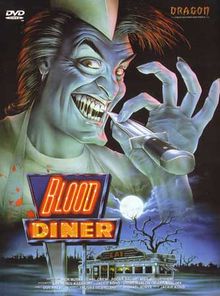 I had never even seen a shooting star before. 25 years of rotations, passes through comets' paths, and travel, and to my memory I had never witnessed burning debris scratch across the night sky. But I have now seen Blood Diner and that's almost as good.


Shot in three weeks on no budget, released to no fanfare in 1987 and still only available in the States on VHS and laserdisc, Blood Diner doesn't boast a lot of promise What's more, it's a sort-of remake of Blood Feast, a little loved flick from twenty years earlier. Who would guess that this is such a special little movie?

Let me pause for a second for a disclaimer before I go into hyperbole. Horror films are like heavy metal music. Both seem childish and/or impenetrable to outsiders yet both have large, rabid cults that have divided them up into infinite sub-genres. And for every metal or horror fan there is one or two sub-genres that really hit their sweet spot. For me it's early '70s proto-stoner metal and the sub-genre Blood Diner belongs in: "horror-comedy".

The best examples of horror-comedy transcend both of their nominal genres. Like Peter Jackson's Bad Taste or Dan O'Bannon's Return of the Living Dead, Blood Diner is less concerned with scaring anybody than mixing gore with slapstick and an anarchic muse limited only by budget. This trailer is a pretty good microcosmic example of everything Blood Diner is: un-self-consciously silly, campy, nostalgic and tasteless.

That trailer also reveals more about the movie than I wish. If your interest is already piqued I urge you to just go to Movie Madness and rent the thing because half of the fun with a movie like this is being surprised. If spoilers don't bother you? Read on. (also NSFW stuff. You've been warned)

Things get off to a promising start with a warning too self-serious to be a joke. Most horror fans can often tell the difference between a gimmicky warning ("What you are about to see is so shocking it should not be seen by those with a weak heart," etc.) and one added as a misguided attempt to save face. Given that Blood Diner was banned in several Canadian provinces I'm guessing this is an example of the latter. Who knows, though; it includes the sentence:

While it is a sad fact that mass homicide and practitioners of Blood Cults infest our society, the producers of this film wish to express that they do not condone nor do they wish to inspire any of the human butchery or violence portrayed in this film.

While I doubt that is a sad fact, it did pique my excitement. That excitement doubled with the first scene: two young brothers, Michael and George Tutman are in a kitschy living room listening to old rock 'n' roll. Their mother leaves them alone ("Where are you little shitheads? I'm going to the market. I ran out of goddamn tampons") while the radio mentions a killer on the loose, now notorious for killing a member of the Happy Times Glee Club. Suddenly a man bursts through their front door with a butcher knife. It's... their uncle Anwar! He just stopped by to give them a couple of five-million-year-old hypnotism amulets before saying his goodbyes and confronting the police barricade that has formed outside and getting gunned down. Uncle Anwar was the killer on the loose.

Whew! Unlike Revenge of the Living Dead Girls, Blood Diner is chock full of event. It's ridiculous scene after ridiculous scene. I'm already exhausted and there's still eighty-five minutes of film I haven't even touched on.

The rest of Diner takes place in a sort of bizarro '80s Los Angeles where health food is a citywide phenomenon and rockabilly music is everywhere. George and Michael now run a vegetarian diner to adoring patrons like Vitamin C, a self-described "heath nut" who is also a three-hundred-some pound redneck. Their rival runs a diner down the street with his partner and only patron, a life-size cowboy doll with a high, childlike speaking voice. This is never explained.

Things kick into action when the Tutmans dig up their Uncle Anwar's body and saw open his head, whereupon his brain pops out like a snake in a can. Fitted out with a jar and couple of eyeballs, Uncle Anwar is resurrected and ready to continue a little project he wasn't able to finish in life.

See, Uncle Anwar wasn't your run-of-the-mill psychopath who just kills willy-nilly; he was busy forming a vessel body of sewn-together girl parts that would house the ancient goddess, Sheetar. In fact, Anwar came pretty close to finishing the job, too, but he bungled up the ceremony by desecrating the always-necessary sacrificial virgin. Now it's up to the Tutman boys to finish the job while Uncle Brainjar leers on, spouting lines like, "Sheetar, your body looks so good. If I had my schlong back I'd show you the meaning of... machismo!"

And so they do, killing people with reckless abandon and then feeding the bodies to their vegetarian diner patrons just because. There are a cops on their trail but they're not really the heroes of Blood Diner. The film is much more sympathetic to the Tutmans' freewheeling nihilism, spreading cartoony chaos without ever stopping to question itself. The Tutmans kill, not to please their dead uncle, but because they think it's funny. And so does Blood Diner. It's a film that could only exist as a labor of pure love, spending its running time only doing what it feels like. Sometimes that's deep frying a woman's head into a giant nugget; sometimes it's staging a tangential match between George and an amateur wrestler named Little Jimmy Hitler; and sometimes its just running over a man repeatedly to the Dootones "Ay Si Si".

Overall rating: 5 out of 5 stars
Overall rating if watched while high: Off the charts
Stray notes and quotes:

The boys can not only hypnotize people but also Kit-Cat clocks.

Sheetar is a model with eyes painted on her eyelids and a giant venus flytrap/vagina in her stomach.

Retired detective describing Anwar before he shot him: ""Craziest damn eyes. I could've sworn they were saying, 'Sooner or later, detective, I'm coming for you. And your little girl, too.' Crazy, huh? I didn't even know I was gonna have a little girl!"

Girl:"Let's do something kinky"
Michael:"Sure. Have you ever heard of battered girlfriends?"
[He rubs batter on her and deep fries her head]

Guy in car, after picking up Sheetar off the street:"Hey baby, right before I stick my big sausage in you. What do they call you?"
Sheetar: "Sheeeetar!"
[roll credits]

Comments 3
Tags: Movies & TV Blogs
If you enjoy articles like this, please help the Mercury continue our mission of providing up-to-the-minute information, progressive journalism, and fun things to do in Portland by making a small recurring monthly contribution. Never forget: Your help is essential and very much appreciated!
CONTRIBUTE NOW

Review: Pam & Tommy May Be Fun to Watch... But You Still Might Feel Bad