Welcome to Should Non-Geeks Care?, a new Blogtown series in which you, a non-geek, can learn if you should care about a particular aspect of pop culture. This series began 20 minutes ago when Wm. Steven Humphrey, who is my boss, sent me this message: "You should start up a new blog series called, 'Should Non-Geeks Care?' And your first subject should be Deadpool. I have zero interest in Googling it, though I would like it if you told me if I should care or not."

Again, Steve is my boss.

What's a Deadpool?
Deadpool is a comic book character owned by Marvel Entertainment, a subsidiary of the Walt Disney Company. First appearing in the X-Men spinoff The New Mutants, Deadpool is also known as "the merc with the mouth," because he is a mercenary who has a mouth. He uses said mouth to make jokes. Unlike most superhero comic book characters, he frequently breaks the fourth wall, and is aware that he is, in fact, a comic book character. Like Wolverine, he also has superhuman healing powers.

So Deadpool's... funny?
He's supposed to be! How funny you actually find him probably depends on your tolerance for running jokes about things such as Deadpool liking chimichangas. (That is the whole joke.) Deadpool's fanbase finds him hilarious, for reasons I've never quite been able to figure out; like the august work of Mr. Seth MacFarlane, Deadpool's jokes are more "words arranged in an order so as to be as recognizable as jokes" than they are "actual jokes."

Deadpool commonly develops obsessions with words and people, repeatedly mentioning the words duodenum and chimichanga, the phrase "Sphincter says what?", and is frequently preoccupied by thoughts of Bea Arthur and the Olsen Twins. (Via.)

Here's a more-or-less representative panel of Deadpool's style of humor from 2012's Deadpool #1, written by Garry Duggan and Brian Posehn with art by Tony Moore: 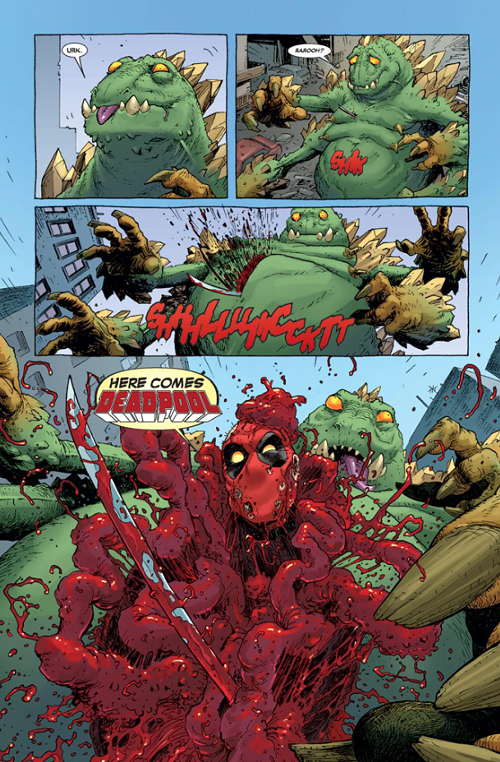 So now there's a movie.
Of course there is. Deadpool won't be out until next year, but there's already a trailer, because superhero movies are now advertised years in advance. (We're currently on year 23 of build-up for the motion picture in which Batman will punch Superman.) This is Ryan Reynolds' second attempt at playing the character (a weirdly distorted version of Deadpool appeared in X-Men Origins: Wolverine, the X-movie that even X-Men fans pretend never happened), and Reynolds' second attempt at playing a superhero (after Green Lantern, the Green Lantern movie that even Green Lantern fans pretend never happened). And if you want to get technical about it, Ryan Reynolds was also in Blade: Trinity, a movie that even Blade fans pretend never happened. (We're going to skip the question "Wait, is Ryan Reynolds box-office poison?")

But you said he's a Marvel character, right? That means the movie will be pretty good, right?
Wrong. Deadpool's movie rights are owned by 20th Century Fox, a studio whose track record with superhero movies is far more dubious. (They're also the ones behind this week's Fantastic Four reboot, a movie that even Fantastic Four fans are already pretending never happened). Like Fox's X-Men movies, Deadpool might be good! It also might be garbage! Either way: It's a Deadpool movie, and chances are if you're the kind of person who would be interested in a Deadpool movie, you already know whether or not you should care about Deadpool.