Filmmaker Chris Eyre loves to discuss the craft of cinematic storytelling, especially where the intersection of Native American experiences and the western film genre overlap. A member of the Southern Cheyenne and Arapaho Tribes, Eyre is widely considered one of the most acclaimed Native American filmmakers of his generation. However, the gregarious and gentle auteur says he just likes to tell stories that far too often go untold.

Eyre's latest passion is his new AMC six-episode drama series Dark Winds—of which he is both director and executive producer. An adaptation of a series of Tony Hillerman detective novels, the show follows a troubled Navajo Tribal Police Lieutenant Joe Leaphorn (Zahn McClarnon) as he attempts to seek justice for a series of murders. He soon discovers that his world is one where justice is in short supply.

Though Dark Winds is set in the '70s, in the Southwest region of the US, Eyre’s journey began right here in the Pacific Northwest. Born in Portland in 1968, Eyre grew up in Klamath Falls, and says he can trace his interest in movies and TV directly back to those years and the region's abundant natural beauty.

“When I was in high school, I started doing photography," Eyre told the Mercury. "I did black-and-white photographs. I printed and processed my own pictures. That’s really what got me started in filmmaking was the image—I’ve always loved the image.”

Eyre's teachers inspired him to explore the craft of photographic media, about which he felt he had ample inspiration. “Oregon provided me with the passion for beauty, the passion for images, and the passion for seeing things,” Eyre said. “I’m indebted to all those people there in Oregon.”

As Eyre entered filmmaking, his work earned increasing praise. Most notable is the enduring and reflective '98 Sundance hit Smoke Signals, which follows the story of two young men who live on the Coeur D'Alene Indian Reservation in Plummer, Idaho on a cross-country journey to recover a family member’s ashes. Smoke Signals was one of the first feature-length films written, directed, and produced by Native Americans to get a wide release in the US and beyond. 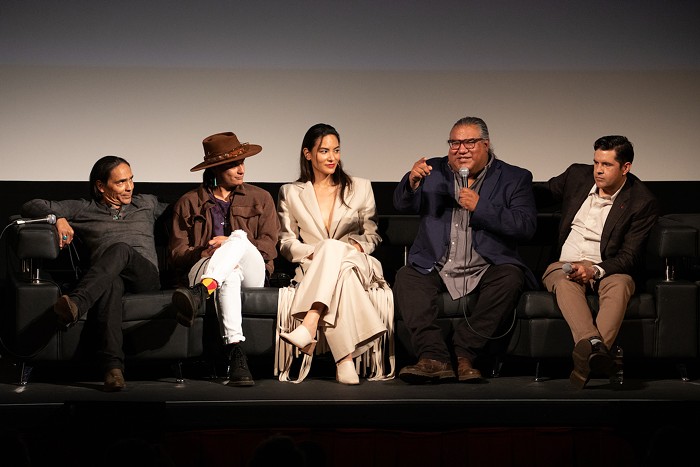 Chris Eye, second from left, speaks into a microphone at a Dark Winds premiere at the Paramount Theatre in Austin, TX. Scott Moore for AMC Networks

With Dark Winds, Eyre is revisiting familiar material, albeit through a new lens.

In 2002, he directed a series of films for the Public Broadcasting Service that also drew from the Hillerman novels, beginning with Skinwalkers. On this go-around, Eyre had both a new cast and access to powerful, historic locations.

“To be in places like Monument Valley and to be shooting where John Ford shot—where decades of movies have been made—is just cinematic,” Eyre said. “To put Zahn McClarnon in a white hero’s cowboy hat as a Native hero is cinematic. The love of those combined elements—the mystery, the culture—that just grabbed me as a storyteller to want to do it again.”

Eyre says he sees the western film genre as a place Native people and their experiences have always belonged, so Dark Winds is another notch, carving out space for their stories.

“How do you have the West without Native Americans?" Eyre asked. "These people are the West. These people are from the place before America. We just haven’t focused on them as characters and protagonists.”

That lack of representation extends beyond stories in the Southwest to the Pacific Northwest, where Eyre says people draw much of their language from the past. "When you have words like 'Oregon' that are Native American words, they’re embedded in the land, in the place,” Eyre said.

Though Eyre now resides in Sante Fe, he still works on Oregon-set projects, recently consulting on the 2021 horror film Antlers, which took much of its narrative tension from Native American wendigo myths.

“I didn’t have any objection," Eyre said. "I didn’t think it was anything more than allegories. Hansel and Gretel is an allegory that teaches people the right way to practice their living. [Antlers] made this allegory and ascribed it to a fictitious tribe. I thought it was a great piece of work that Scott Cooper did. I was happy to join.”

Eyre said he sees it as good that there are a variety of works to engage with the wide array of Native stories.

“With the Indian community, you realize that it is a community. It’s Reservation Dogs, it’s Rutherford Falls, it’s Dark Winds.” Eyre said. “That even can be extended to non-Native people. Little Big Man is a favorite film of mine. I don’t think we could ever be cut and dry about who the auteur is when it comes to art. Art is supposed to transcend all these boundaries. If somebody makes something good, I look at it and say: 'It’s good.'”

As for what's next on his list of projects, Eyre said he hopes to continue with future seasons of Dark Winds, so he can work more with McClarnon as a lead.

“I would love to have a second, third, fourth, and fifth season,” Eyre said. “When Zahn and I finished shooting, we both looked at each other and said: 'We're just starting to get a real feel for the depth of the character, the show, and what it is we’re creating.’”