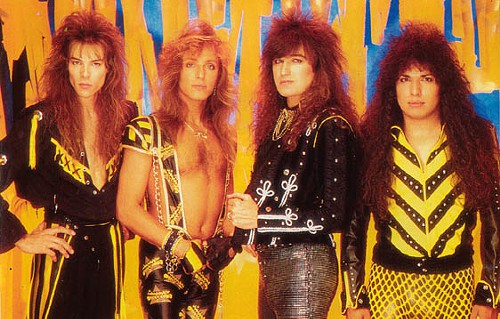 Another week, another Mercury music section to ignore while you read Sony Japan's apology for letting one of their bands dress like Nazis in a music video. I'm more insulted by their music, plus that awful blonde, feathered hair. Actually, the Nazi thing is probably the third worst part of that video.

Oh look, it's our Secular Guide to Stryper. Here is a primer on the yellow and black, bible-throwing attack of Christian hair metal's finest band. Rock out with your flock out!
LISTEN:

Stryper - "To Hell with the Devil"

Kelli Schaefer was torn between changing the world or making music, she went with the latter. Your job is safe, Bono.
LISTEN:

Kelli Schaefer - "Ghost Of The Beast"

To hell with the Devil? How about to hell with God? Deicide have made a career of mocking the man upstairs and don't plan on stopping anytime soon. Bonus points: Their singer has an upside cross branded into his forehead. Your move, Stryper.
LISTEN:

All these heaven and hell fighting has me craving something simpler. Maybe some Beatles-influenced pop from a couple handsome French gentlemen? Thanks, Revolver. That'll work.
LISTEN:

End Hits: To heck with Satan.

Comments 1
Tags: Music Blogs
If you enjoy articles like this, please help the Mercury continue our mission of providing up-to-the-minute information, progressive journalism, and fun things to do in Portland by making a small recurring monthly contribution. Never forget: Your help is essential and very much appreciated!
CONTRIBUTE NOW