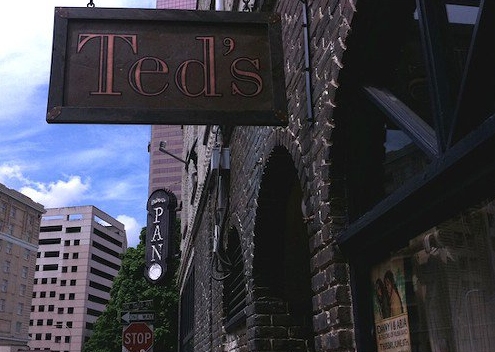 Much like Jesus, or Brett Favre, Berbati's Pan just can't stay away. First, the fabled downtown venue closed their doors, only to (somewhat) reopen a few months later. Now the venue has a new name, Ted's, (named in honor of its late founder, Ted Pappaioanou) and they are hosting a grand reopening party on July 30th.

Given their strong Greek heritage, it makes perfect sense that this party will feature... a Bollywood DJ. Akbar Sami, in fact, a Mumbai-based DJ that is supposedly the "Remix King" of India.

Akbar Sami has lit up the stage for audiences worldwide with his suave, utterly cool stage presence.

San Francisco based Non Stop Bhangra will be joining Sami onstage. Imagine a scene from a Bollywood movie smack in the middle of a thumping nightclub with an ever-evolving collective of dancers, DJs, drummers, vocalists, and musicians—-the swirling colors, the rhythm of pounding feet, and the relentless energy of brilliant beats. Non Stop Bhangra is a non-stop party.

The Ted's room is a little cozier than before, as the tourist magnet that is Voodoo Donuts has taken nearly half the venue as part of their recent expansion. Welcome back, Berbat's/Ted's.

Tags: Music Blogs
If you enjoy articles like this, please help the Mercury continue our mission of providing up-to-the-minute information, progressive journalism, and fun things to do in Portland by making a small recurring monthly contribution. Never forget: Your help is essential and very much appreciated!
CONTRIBUTE NOW