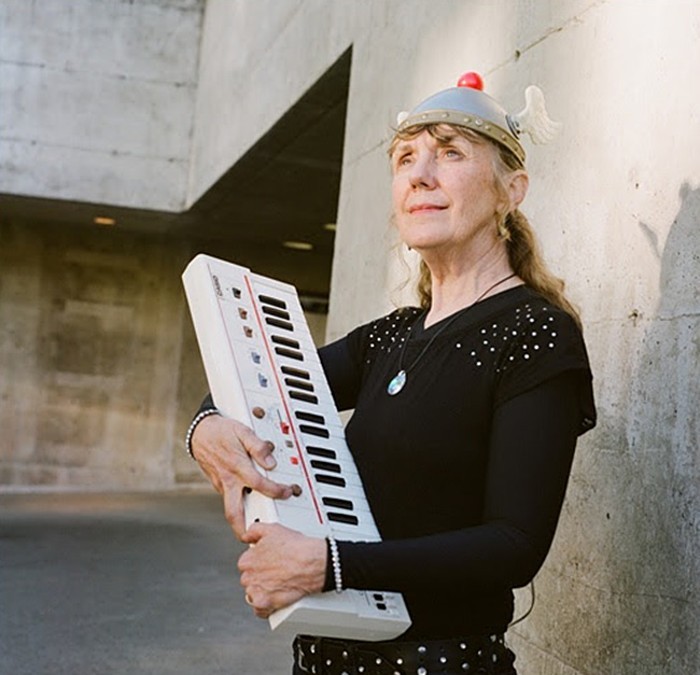 There’s no one quite like the Space Lady. Susan Dietrich Schneider left her small Colorado hometown in the ’60s for San Francisco, where she met her first husband Joel. When he was drafted in the Vietnam War, they retreated into the wilderness of Northern California, making their home in a cave atop Mount Shasta. The couple had three children, and to support her family, Schneider—AKA the Space Lady—would busk on the streets and subways of San Francisco and Boston throughout the ’70s and ’80s.

Sporting her signature winged valkyrie helmet, she’d perform celestial, electronic interpretations of classic rock songs like Steppenwolf’s “Born to Be Wild” and the Electric Prunes’ “I Had Too Much to Dream Last Night,” singing through an echo unit and plugging her Casio keyboard into a phase-shifter pedal. On “Ghost Riders in the Sky,” she howls “yippie-yi-yay” like a space-bound cowboy wrangling the constellations into their proper places, while iconic tracks like “Synthesize Me”—a psychedelic original written by Joel—are made great by burbling spaceship bleep-bloops and her placid, Joni Mitchell-esque vocals, which sound like they’re echoing, as she sings, “from a strange planet a zillion light-years away, through a black hole across the Milky Way.”

In 2000, the Space Lady moved back to Colorado, where she became a nurse and met her second husband, Eric Schneider, also a musician. He coaxed her out of retirement about five years ago, and last year she performed a sold-out show at the Hollywood Theatre, where she’ll return this Friday. What to make of the Space Lady’s troubling stance as a 9/11 truther (which she detailed in a 2014 interview with Vice)? Considering she also claims to have been abducted by benevolent aliens while she was under anesthesia for a surgery, I suppose we’d best take her political beliefs with a grain of cosmic dust.

Formerly a senior editor and the music editor at the Mercury, Ciara Dolan writes about music, movies, TV, the death industry, and pickles.
If you enjoy articles like this, please help the Mercury continue our mission of providing up-to-the-minute information, progressive journalism, and fun things to do in Portland by making a small recurring monthly contribution. Never forget: Your help is essential and very much appreciated!
CONTRIBUTE NOW