Hunter Noack playing piano in Big Sky Montana Arthur Hitchcock
When he answers the phone for an interview with the Mercury, Hunter Noack is moving stuff from a storage unit to a flatbed trailer. His traveling concert series In A Landscape, which stages classical music performances outdoors, is hitting the road again.

“We’re going to [Dayton] to do a couple of winery gigs,” Noack says. “Or actually, they’re not really winery gigs. We’re bringing the music to the winery.”

The distinction is small but important: A “winery gig” implies that the winery regularly hosts live music, probably sets space aside for performances, and maybe even has a microphone, amplifiers and other gear. With In A Landscape, Noack—a classical pianist and member of Portland-based big band Pink Martini—takes a complete live classical music experience to scenic, often remote places that otherwise would never host a concert.

Over the next two months, he will truck a 9-foot, 1912 Steinway & Sons grand piano to resorts, ranches, national monuments, and other natural spaces— Noack will play in places as close as Portland's Kelly Point Park and as far as Huntsville Monastery in Utah.

“It’s my dream job because it brings together the two things I love doing most: playing the piano and spending time outdoors,” Noack said. “I feel like the luckiest person that I know.” 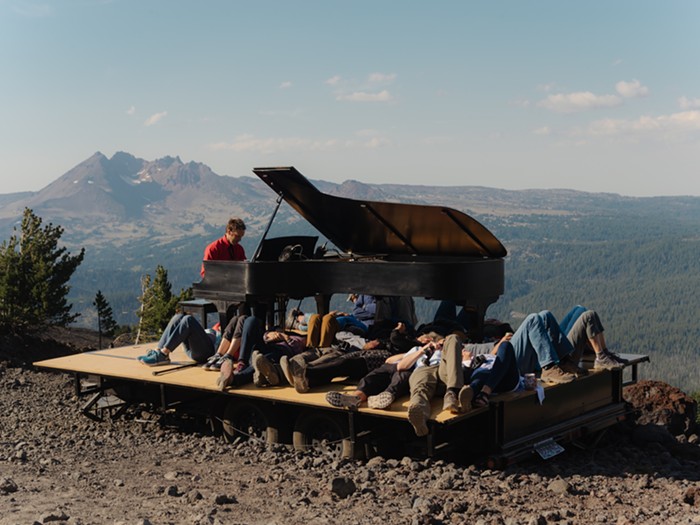 An In a Landscape concert at Mount Bachelor Arthur Hitchcock
Noack founded In A Landscape in 2016, bolstered by unique and immersive performances he had staged earlier in the 2010s and inspired by the federal Works Progress Administration’s music and theater projects, which brought free and subsidized concerts and plays to rural communities during the Great Depression. At the time, Noack was moving back to Oregon after stints in San Francisco, Los Angeles, and London, and he looked forward to soaking in his home state’s natural beauty.

“Coming to Oregon was coming home,” he said. “I grew up hunting and fishing and spending a lot of time outdoors, so when I was back, I was like, ‘What I really love is backpacking, camping, and hiking. I wanted to figure out a way to be outdoors as much as possible.”

With support from his mother, Lori, his partner—Pink Martini leader Thomas Lauderdale—and others, Noack launched In A Landscape and planned nine shows in the area around Portland. When those went well, he secured grant funding to take it across the state. Since then, Noack has played more than 150 concerts as part of the series.

The itinerary has taken Noack and his Steinway—purchased for In A Landscape by local real estate magnate and supporter of the arts Jordan Schnitzer—to a lot of far-flung places in challenging conditions.

“This instrument has seen hundreds of miles of washboard dirt roads. It’s been played in negative two degree weather in Big Sky, Montana, and 110 degrees in the Oregon desert,” Noack said. “It’s a remarkable instrument, and it continues to impress me with how resilient it is.”

He pauses and chuckles: “It’s a tank, but it’s a beautiful and delicate tank.”

To meet the acoustic challenges of some locations, audience members are provided wireless headphones, which allow them to wander and “choose their own adventure,” Noack said. Where the traditional audience experience in a concert hall can sometimes feel claustrophobic or distant from the art, he said, In A Landscape aims to deliver an intimate, unobstructed, and interactive listening experience.

“That’s why people love these shows so much,” he said. “The music is pretty. It’s comfortable. And there’s a sense of freedom. We deliberately keep them small so people feel like they have space.”

The surroundings are an essential part of the experience too, of course. Noack has performed at an elevation of 8,000 feet on Mt. Bachelor near Bend, on the vast, dry lake bed of the Alvord Desert in Eastern Oregon, on a hilltop overlooking Haystack Rock at the Oregon Coast, and in the middle of Portland’s North Park Blocks. 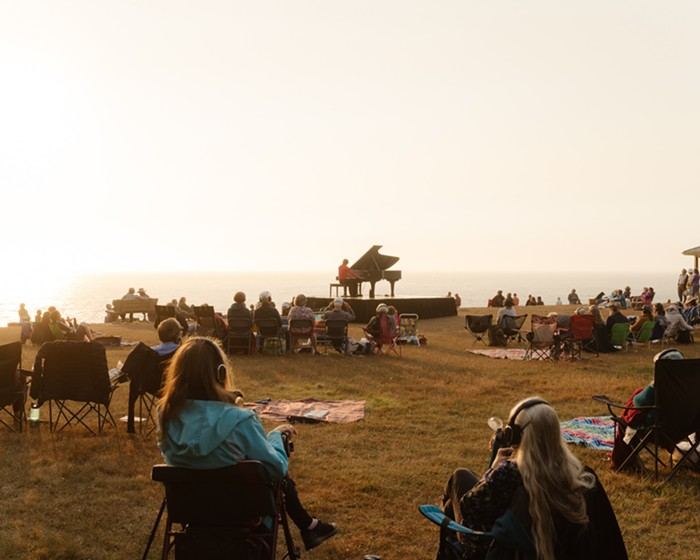 Hunter Noack playing a concert at Tetherow Resort in Bend, OR Arthur Hitchcock
The most rural, most remote locations tend to be the most meaningful to the pianist. He explained that he loves many aspects of In A Landscape—the traveling, the scenery, the experience—but his favorite part might be the people.

“The music is amazing, but it’s really the combination of these incredible places, the people who live there, and the pride they have in their communities,” Noack said. “They may love classical music, but they may not get much of it where they live and they are just so grateful to have a concert that’s closer than driving three hours to Portland or Boise. And then there’s the third of our audience that has never been to a classical music concert before, and we’re able to bring that experience to them. That’s exciting and rewarding.”

In A Landscape has expanded beyond Oregon over the years and its board of directors recently developed a strategic plan for the future. But Noack isn’t thinking bigger—he’s focused on the present, what makes him happy and what makes his audiences happy.

“It doesn’t need to grow any more for me to be satisfied,” he said. “There’s a tendency—almost pressure—to think about taking this across the country, but I have to check myself because I don’t want it to turn into an office job where I’m managing other artists. I love doing exactly what we get to do for half the year, which is drive around in the truck and make music for people in beautiful places.”

Hunter Noack's In A Landscape concert series will hold three shows in Portland in August, one at Kelly Point park and two at Vietnam Veterans of Oregon Memorial. The series continues throughout Oregon and into neighboring states, through October, locations and ticket prices vary.