This year’s fest will take advantage of its gorgeous natural setting, and create “a new world” for festival goers to explore. 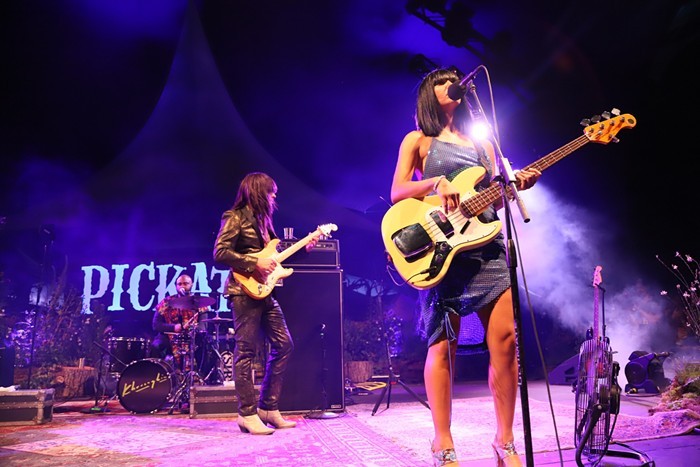 As the saying goes, “if it ain’t broke, don’t fix it,” but Pickathon 2022 isn’t adhering to that age-old motto. This year, Pickathon Music Festival is back for the first time since 2019, after a two-year hiatus due to the pandemic. The time off gave the team behind the festival an opportunity to dream up new stages and a new format for the festival’s landscape.

“The Woods Stage was always a favorite for the festival,” Pickathon CEO and Co-Founder Zale Schoenborn explained. “That taught us that nature kicks everything's ass. Instead of trying to stop it, let's just take that lesson to heart and think about the entire site as a bunch of stages [in] amazing places that are already cool, and then we just make them cooler.”

Upon releasing this August’s lineup, Pickathon also revealed that this year’s fest will take advantage of its gorgeous natural setting like never before, and create “a new world” for festival goers to explore.

Since its 1999 inception, concert-goers have revered the folksy music festival at Happy Valley’s Pendarvis Farm for its practices that minimize or eliminate the worst parts of most music festivals, as well as aiming for a low carbon footprint. For example, they have pioneered a ban on single-use items in favor of requiring reusable plates, cups, and utensils, resulting in impressive waste reduction, and a gloriously litter-free event. Every artist plays two sets throughout the four-day weekend, giving concert-goers another chance to catch must-see acts who might conflict with each other elsewhere on the schedule. It’s also an exceedingly family-friendly music event: Kids under the age of 13 get in free and, in contrast to venues like Edgefield, which has outlawed diaper bags and big blankets, Pickathon encourages families to bring a wagon’s worth of supplies if needed. They also offer programming for kids and other fantastic services, like a Family Feeding Nest—AKA, a private area where breastfeeding moms can relax, nurse, pump, and/or refrigerate.

Currently under construction, the 2022 layout will be separated into various neighborhoods, and there will be a more natural, continuous flow to the grounds and the days’ schedules. Of course, the new changes are also inspired by Pickathon’s mission to make an epic and beautiful music festival with good vibes, inclusivity, and a relatively low carbon footprint.

Building large-scale stages and structures takes a lot of machinery, which requires transporting, and the amount of gear needed for the festival’s design elements took an incredible amount of resources in the past. The iconic shade installation—hanging pieces of colorful fabric—that used to festoon the former Starlight Stage have been ixnayed, and the new format will provide shade by following the day’s cycles. (The change to making use of naturally shaded areas makes even more sense upon remembering the tragic case of the two male arborists who died after Pickathon 2019, when a boom lift tipped over while they were in the process of taking down the complex shade installation.) During the warmest hours of the day, audiences will cool off while watching shows in the property’s newly added wooded areas and sunset shows in the Paddock and Crossroads neighborhoods. Then as it gets dark, they'll move inside to the expanded Lucky Barn and Galaxy Barn neighborhoods.

This year there's a design build-team appointed for each of Pickathon’s new neighborhoods, and each has its own theme and narrative.

“We have a bunch of teams working in parallel right now, trying to build their locations on our 'Fantasy Island'," Schoenborn says. "It's really a bit nerve-wracking cause we're doing it all over again.” In the past, the Treeline Stage area was an early iteration of their neighborhoods concept: A design build team from PSU constructed a large-scale art installation stage—like 2019’s structure made from 160 reclaimed wooden apple bins—and the same area also housed a couple of food and drink options.

The Woods Stage—which is quite literally a wooded stage nestled into a forest—is the only stage from the old Pickathon to return to its original location in a similar iteration, only now there’s an entire Woods Neighborhood. Instead of the Treeline Stage, and the Mt. Hood/Starlight Stage—where most of the food and drink and shops used to be located—there will be a much more spread out Meadow area and Paddock neighborhood that offer a totally different vibe than in years past, as well as intimate, medium-sized stages in the Grove (a former campsite) and Windmill neighborhood (which will offer food and drink, and massage). The Market is, you guessed it, a new home for a variety of food and drink vendors and retailers, while the Refuge neighborhood focuses on wellness programming, and Wildhorse is a new and improved backstage area.

There’s also a neighborhood called Coyote Corner that encompasses a plethora of programming for kids, which Schoenborn describes as “an entire summer camp’s worth of activities, jammed into a weekend.” And indeed, there are a lot of things to keep kids preoccupied, from toddler babysitting and music workshops, to sing-alongs and family yoga.

“All of the activities that the kids will have during the day are going to be in the shade," Schoenborn points out. "You can go out into the sun and there are spaces to play, but we're really cognizant that it could be 100 degrees, and [we want to] make it awesome even if it’s that hot.”

When asked whether the hammock village will still be a thing, Schoenborn says, “Well, that's never been official. We never put that up… it's like some secret little gnome army that does it. So I have no idea. I've never seen one put up or taken down, I've just gone out there and there they are.”

Now that the schedule for this year’s Pickathon lineup has been released, tickets are close to selling out. Head to their website to see the schedule and buy tickets.