There's a building on NE MLK that people driving by probably don't notice at all. The fancy new development across the street with its bizarrely-named restaurant "Belly" probably steal their focus first. But when you happen to wander by on foot, this building's curious, off-kilter details are far more interesting than its posh new neighbors. 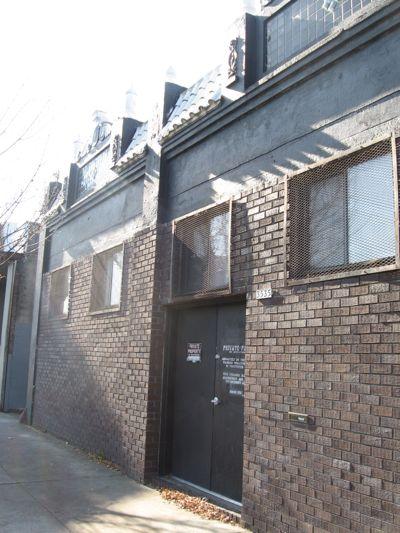 The roofline is a strange black and white gothic facade that looks handpainted: 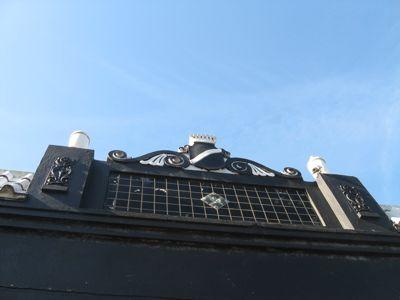 And the only words on the building are this intriguing threat stenciled on a large black door: 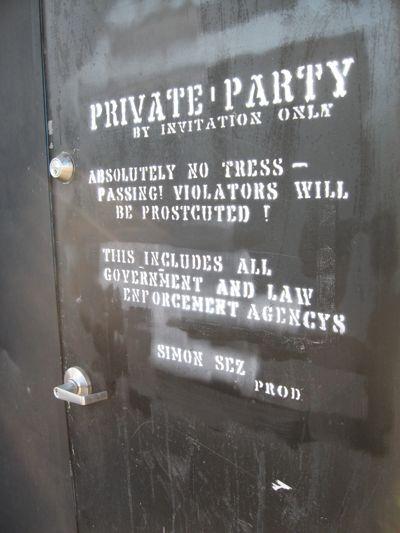 What is this private party to which law enforcement are specifically uninvited? And how do I get in? The neighbors knew immediately - the strange building is the exclusive clubhouse of Oregon biker gang the Gypsy Jokers. An Oregonian article says that police believe there's about 80 Gypsy Jokers in Oregon, about half of them with felony records for crimes like murder, rape and robbery. But these days it seems like the Jokers spend their free time living lawless in simpler ways.

The neighbors say the club isn't so much an epicenter of biker mayhem as a party house for a bunch of older, rough and tumble kind of guys. Some Friday and Saturday nights the Jokers race Harleys through the corner stoplight and every year on April Fools, there's a major rally with 300-400 bikes jammed onto the small street behind the clubhouse. "They start their bikes all at one time, it gets so loud you can't hear the TV, it shakes the house," says a neighbor who lives on the corner, "But it's kinda cool at the same time." The neighbor seems surprisingly calm about living next door to the headquarters of a rowdy biker gang. "We don't really say hello to each other, but as long as they mind their business and I mind mine, it's fine," he says, "It's kind of how we deal with the crackheads around here, too."

Getting inside the clubhouse is near impossible. The club's front is that enigmatic brick and black exterior and along the back of the property runs a tall metal gate attached to a decrepit white home. One neighborhood rumor is that the police showed up at the run-down white house a couple years ago with a battering ram. They broke down the back door only to find the entire interior covered with chicken wire - made impenetrable just in case some enemy happened to have a battering ram. I mustered up the courage to walk up the wooden porch steps and knock on the house door - no answer. So I stood at the gate and peered between the bars: a dirt lot, a small dog, two Harleys and a sign scrawled with "Bikes Only." I looked down at the gate latch. It was unlocked. I could easily push the metal bars open and go in. I thought about this for a moment. Then I thought about handguns. I could never, ever go in.

The Gypsy Jokers say one of their core values is patriotism. Other people call that racism. "Members must be male, 21, and own an American-made bike - cops, gays, needle users and African Americans need not apply," says the Oregonian article. What's crazy about the this is that right next door to the Gypsy Jokers fortress of white male supremacy (on Martin Luther King, Jr. Avenue) is a reggae bar and African cultural center called New Born Tribe. They even share a sign, they're literally on opposite sides of the same pole: 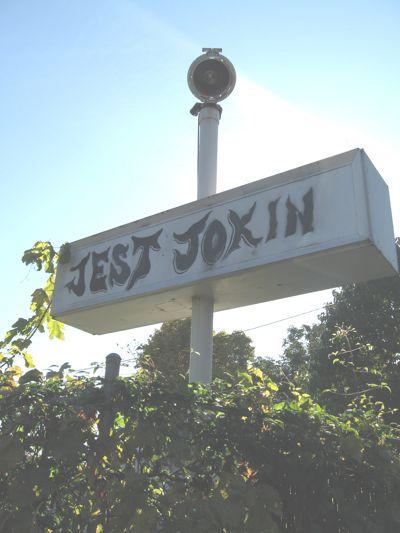 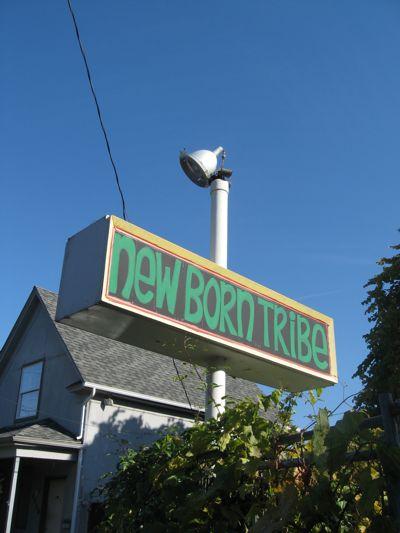 Turns out the Jokers are serious about the "violators will be prosecuted" threat, too. The actual police raid that grew into the rumored Battering Ram Incident wound up with in court, with Portland paying the Jokers $50,000 in damages.

I waited outside the metal gate for a while, trying to get a glimpse of anything worth hiding. Then, all of a sudden, an older man in metal-frame sunglasses and a gigantic Gypsy Jokers belt buckle came outside and walked swiftly to a car parked at the curb. I jumped up and told him I was curious about the place and about the Jokers. He told me there was nothing to be curious about, got in his car and drove away.

Comments 34
Tags: Neighborhoods Blogs
If you enjoy articles like this, please help the Mercury continue our mission of providing up-to-the-minute information, progressive journalism, and fun things to do in Portland by making a small recurring monthly contribution. Never forget: Your help is essential and very much appreciated!
CONTRIBUTE NOW