Rules of the Game

TUESDAY AFTERNOON, May 13, with the homeless protesters in front of city hall facing enforcement of the city's camping ordinance, five representatives sat down with Mayor Tom Potter.

The meeting did not go so well. Potter didn't let the protesters record the conversation. Afterward, protest organizer Arthur Rios Sr. waved the mayor's prepared statement, and told assembled reporters that Potter "already had a response to this meeting before we even had this meeting." Rios Sr. vowed to keep up the protest, and headed outside to tell the crowd what had transpired in the meeting.

Potter spoke next, reading from his statement—which noted that the city "spends $37.5 million every year on programs to end homelessness, get people into jobs, and develop housing."

"We feel that it's time that they comply with the rules that are set up around protesting," Potter said. City staffers handed out copies of the sit-lie and camping ordinances, but it's unclear when police officers will begin enforcing them.

The meeting capped off a weekend of tension, as homeless people and their allies continued to protest the city's sit-lie and camping ordinances, plus inadequate shelter and housing options.

On Saturday morning, May 10, as a group of homeless people kicked off a third week of protesting in front of city hall, police stopped by to hang bright orange signs, which noted that the site would become an illegal campground on Tuesday, May 13. Protesters say they were ordered to the curbside of the sidewalk, and told that unattended belongings would be confiscated.

A few hours later, the police stopped by again. Central Precinct Commander Mike Reese told the protesters on the south side of city hall that TriMet bus drivers had called in to complain, alleging that the protesters near the bus stop were sticking their legs out into the street.

Protesters argued, pointing out they were only on the curbside at the cops' behest. For two weeks, they'd peacefully camped out alongside city hall's balustrade—far from passing busses.

The détente ended with seven arrests, after six protesters refused to budge and were arrested for interfering with an officer. A seventh—protest organizer Larry Reynolds—was handcuffed for resisting arrest. (Go to blogtown.portlandmercury.com/politics for footage of the arrests.)

The next day—as the crowd counted down the hours to May 13, worried they'd be "swept" away from city hall just after midnight—protesters sent a letter to the mayor, requesting a public meeting.

"We want a real dialogue about the homelessness and affordable housing," the letter said, asking for a meeting "before any attempt to remove our protest."

Potter responded, scheduling a closed Tuesday afternoon session, and reiterating his ground rules: "While I believe in your right to express your views, I also believe that every right comes with a corresponding responsibility to respect the law." 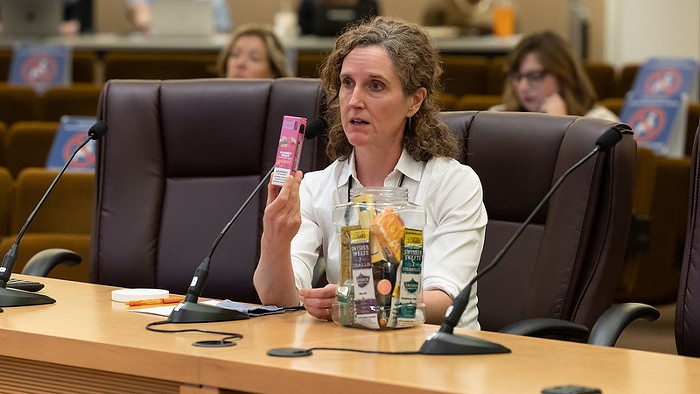