As further evidence that Portland is the capital of socialist plots for a suffocating welfare state, the Multnomah County Library has snagged the nation's top spot for circulation volume for the eighth year in a row. 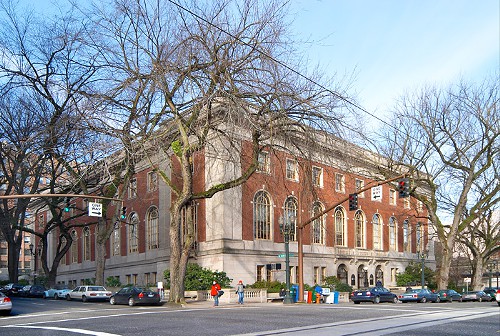 Actually, we're number one among libraries serving populations of less than a million, and number two among all American cities. Who beat us to the top? The Queens library in New York City, with a circulation of 23.5 million items per year. Ours is almost as high, with 425,979 cardholders checking out 22.7 million items. Pretty impressive for a county that most New Yorkers have never even heard of.

CDs and DVDs are an increasing part of circulation for many libraries, and Multnomah County does a quick business in multimedia items—but print is still ahead: of those 22.7 million things, 13.9 million were print materials and 5.7 million were CDs or DVDs. Some people here are clearly still literate.

But trends are shifting, and the web plays a big role in library use. "The most remarkable thing to me is that more people are accessing the library via the web than walking into the buildings," says Senior Library Manager June Mikkelsen.

The news comes as the library system prepares for a ballot measure in November that aims to give county commissioners the ability to issue another ballot measure that would establish a dedicated tax district for library funding. That means that instead of reauthorizing a tax levy every 5 years (the current one expires in 2012), we would permanently set aside a percentage of property tax revenues for library funding. Our current top billing doesn't mean that money will necessarily keep flowing; one needs only look to Hood River County to see that in a pinch, libraries are often the first service to be cut. (While they were shutting their libraries, Multnomah County was opening a shiny new library in Troutdale.)

Why the high circulation figures year after year? "We'd like to think that we provide what people want," says Mikkelsen. Is that enough to make us commit to a stable funding source? We'll wait and see.

Update 3:05 pm: The library is hosting a block party on Saturday outside the central branch from 12-3 pm.