A year and a half before he found easy employment as an Uber driver, a rogue Portland taxi driver was the subject of a troubling complaint.

According to records obtained by the Mercury, a woman wrote to city officials in September 2013 that Kundin Nadew picked her and some friends up outside of an Old Town bar after a night out. In a lengthy complaint, the woman—whose name was redacted in the records—laid out how Nadew began to creepily hit on her once her friends had been dropped off.

"The driver went a few blocks down to a road with few street lights and requested I come and sit in the front seat," the woman wrote. "I was leaning forward to see where the driver was going with my hand on the shoulder of the passenger seat when he grabbed my hand and started kissing it."

The disturbing account adds fuel to the gripe—voiced again and again by the city's cab companies—that Uber doesn't do a thorough enough job vetting its candidates. As we reported in June, Nadew had amassed thousands of dollars in fines for illegally operating a cab in Portland by the time he found a job with Uber, and would never have passed the background check many cab companies use. At the time of the woman's complaint, Nadew was banned from picking up fares in the city because of a 2012 drunk driving arrest.

The driver, who operates legally in Beaverton, and is allowed to bring passengers into Portland, came to our attention earlier this year, when videos began to emerge of him shouting at cab drivers, like so:

That video was shot after Uber confirms it hired Nadew as a driver for an undisclosed period of time, before dropping him from its platform. The city calls Nadew a "poster child" of bad cabbies, and says it forced the ride-hailing service to let him go, once complaints started rolling in that he was tooling around with the imprimatur of an Uber "U" sticker.

Controversy over the background checks so-called "Transportation Network Companies" like Uber and Lyft run on prospective drivers isn't remotely unique to Portland. It's cropped up in practically every city where the services have set up shop—particularly after instances of serious assaults by Uber drivers with spotty legal records. District attorneys in Los Angeles and San Francisco have even used the background checks as fodder for lawsuits against the transportation giant.

Now, Portland's coming up on a big decision regarding TNCs. For almost four months, Uber and Lyft have been permitted to operate within city limits under the terms of a temporary pilot project, snatching a good deal of market share in the process. Next week, Portland City Council is scheduled to receive a progress report on that project, and will determine at some point soon what permanent regulations to enact on TNCs, cabs, and other forms of "private for-hire" transportation.

So far, Uber and Lyft's operations in Portland have carried little of the drama that's cropped up in other cities (well, besides the whole thing where Transportation Commissioner Steve Novick compared Uber to the "third reich" and filed a brief lawsuit). But Nadew's case is illustrative of the essential issue.

The records we've obtained show complaints against the man date back to 2010, when Nadew was a driver for Broadway Cab. Even as a licensed cab driver, Nadew would moonlight, picking up fares in his own vehicle. According to city documents, he responded "this is free land and I'll kill you all" when confronted about the illegal operation in 2010.

The September 2013 complaint shows something far more worrying than Nadew simply breaking the rules. Read the whole thing after the jump. 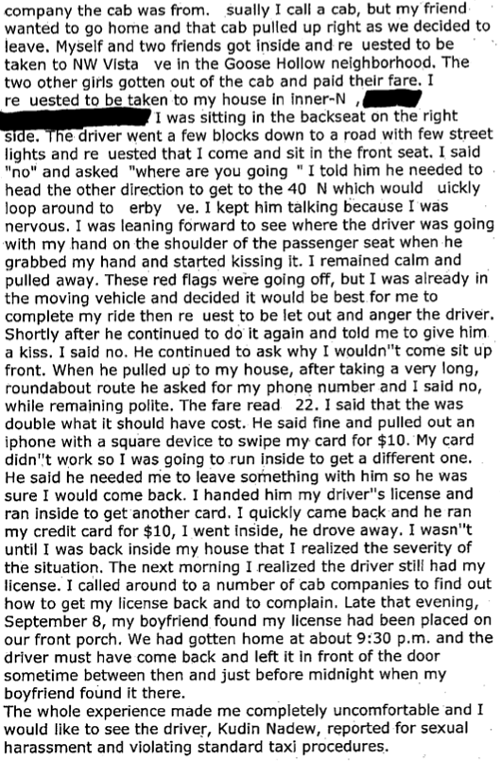 Tags: News Transportation ?!?!? Blogs
If you enjoy articles like this, please help the Mercury continue our mission of providing up-to-the-minute information, progressive journalism, and fun things to do in Portland by making a small recurring monthly contribution. Never forget: Your help is essential and very much appreciated!
CONTRIBUTE NOW