One Building at a Time.

Nine percent of the buildings in Portland are the most dangerous structures to be close to during an earthquake. They’ll likely be the first to crumble during the looming Cascadia Subduction Zone earthquake, dropping rubble onto the heads of passersby and crushing building occupants. These vintage brick buildings encompass much of Old Town and the Pearl District and are scattered across nearly every Portland neighborhood—to the extent that many historic preservation enthusiasts say their facades define the city’s character. This week, Portland City Council is considering a resolution that would make these unreinforced masonry (URM) buildings safer—but may also threaten them with demolition.

On Wednesday, May 9, city council will vote on whether to move forward with several policies to prepare the city’s 1,650 URMs for an earthquake by mandating major building retrofits, offering financial aid for these expensive repairs, and requiring placards labeling the city’s URMs. Building owners and some residents oppose the resolution, arguing that the city has not created a guaranteed financial path forward for low-income owners who will be tasked with retrofitting their buildings. Earthquake experts, meanwhile, say the proposed policies won’t do nearly enough to save lives.

Most URMs in the United States were constructed between the 1870s and the 1960s. They were built to prevent fire, not withstand a colossal earthquake, according to Amit Kumar, a structural engineer with Portland’s Bureau of Development Services.

“Typically the walls, floors and roof aren’t connected, so in an earthquake, the wall and floor will disconnect and separate from each other, leading to the collapse of the building,” Kumar says.

According to Jonna Papaefthimiou, a resiliency manager with the Portland Bureau of Emergency Management, most people who are killed by URM buildings during an earthquake are running out the door, and are hit by a piece of the falling building. She says that Portland’s 1,650 URMs—including 47 that are city-owned—make up nine percent of all buildings in Portland, and 21 percent of them are apartment buildings. According to a study of over 4,000 URMs in the US, and how they performed during earthquakes, one in five buildings partially or fully collapsed during a strong quake, while five out of six sustained enough damage to send bricks falling.

“Even if 10 percent of the URMs [in Portland] collapse, that’s a lot of people who die,” Papaefthimiou says. “That’s hundreds of people dead. It’s 165 buildings, and each of them has people in it.”

Construction experts and geologists advocate for mandatory retrofits of URMs to meet the federal “life safety” standard—where, even in a serious earthquake, everyone is able to walk out of the building alive. To achieve that in a URM, the floors and roof are tied to the walls, the parapets (walls that extend above the roof) are reinforced, walls and floors are sometimes thickened, and the entire building is sometimes fitted with a giant metal frame for support. Together, Kumar says, these retrofits help those inside survive.

“Even if 10 percent of the URMs [in Portland] collapse, that’s a lot of people who die. That’s hundreds of people dead. It’s 165 buildings, and each of them has people in it.” —Jonna Papaefthimiou, Portland Bureau of Emergency Management

Mayor Ted Wheeler has tacked on an amendment to the May 9 resolution that would limit the required retrofits to just the roof and parapets—something the city has required, but not enforced, for years. If council commits to this plan, URM owners would have 20 years to retrofit their properties.

“It winds up being sort of an experiment. It might not do anything at all,” he says. “I’m a little skeptical of very modest retrofits to very, very vulnerable URM buildings. It doesn’t sound very effective at all, to be honest.”

But effective retrofits can be prohibitively expensive, making it hard for the city to mandate or finance them. According to advocacy group Save Portland Buildings, retrofitting all the URMs in Portland would cost $1.4 billion—up to $105.50 per square foot—and almost all of that cost would fall on building owners.

Angie Even owns a URM building at 44th and Southeast Woodstock—a building she says she’s poured her time and resources into since she bought it in the 1990s. Even says she didn’t find out her building was a URM until 2016, when she received a postcard in the mail about a city meeting. Retrofitting just the roof of her 35-foot-tall commercial building would cost her between $170,000 and $200,000, she says.

“How do you get there if you’re an owner or an owner-operator?” asks Even. She says many URM owners only own one building and depend on it for their income. These owners may be forced to sell their building for a reduced price—and could potentially see it demolished—if they can’t afford retrofits. “The small building owners and mom-and-pop owners and condo owners... they’re going to lose to the developer,” Even says.

Wheeler’s amendment attempted to address the extreme cost of retrofits.

According to Elisabeth Perez, a policy advisor in Wheeler’s office, this week’s resolution will help draft policies for the state legislature to provide some financial support for URM owners. At the moment, only historically designated URM buildings are likely to get significant help with retrofit costs.

If approved, this week’s vote won’t immediately determine whether URM owners need to pay for retrofits—it will only tell city staffers to start drafting policies that would update code and provide financial options for building owners. A more concrete ordinance mandating construction should come back before council within a year—hopefully before the earthquake hits.

Comments 1
Tags: News Kelly Kenoyer
If you enjoy articles like this, please help the Mercury continue our mission of providing up-to-the-minute information, progressive journalism, and fun things to do in Portland by making a small recurring monthly contribution. Never forget: Your help is essential and very much appreciated!
CONTRIBUTE NOW 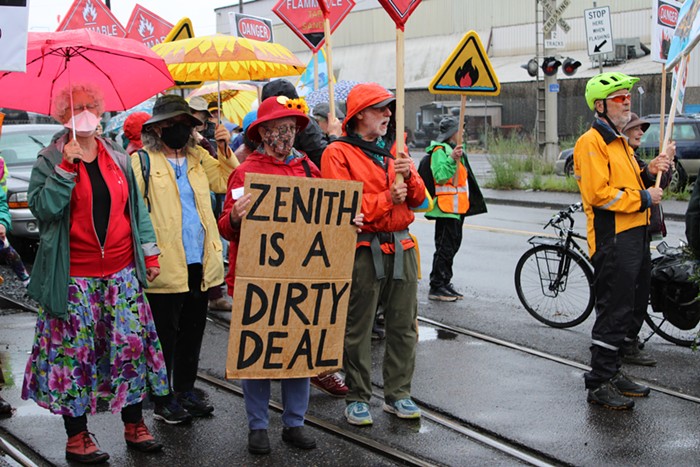