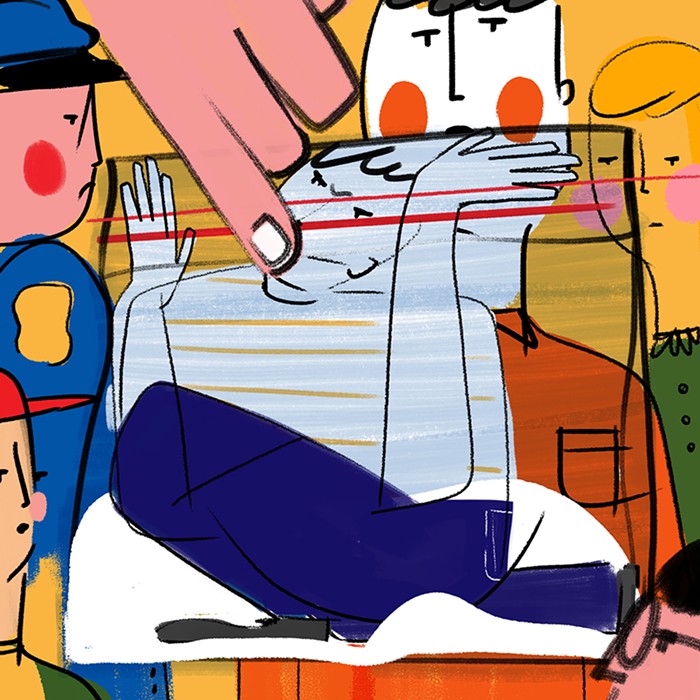 John clearly remembers the night, more than a decade ago, when a friend overdosed in his car.

The two men were driving across Portland, on their way to buy heroin to use and sell. John’s friend was out of his own supply, so John lent him some heroin to tide him over until they purchased more.

“He overdosed right there in front of me,” says John, who asked that the Mercury not use his last name. “I was getting ready to shoot up, and he was falling onto me.”

John rushed his friend to an emergency room, where doctors were able to revive him. He survived the overdose. That happened sometime between 2003 and 2007—the period of time when John, who no longer uses drugs, routinely consumed and sold heroin, meth, and cocaine. John said his decision to bring his friend to the hospital was an instinctual one.

But that was then. John wonders if he would have made the same decision if a law like the one currently being considered by the Oregon Legislature—which would increase punishments for people who supply drugs that lead to an overdose death—was in effect.

“If you were to throw that component on there—my knowing [that] if I take this guy to the ER, I could get in trouble for giving him drugs and if he dies, I could get five, 10, 20 years,” John says. “That would be a huge deterrent to saving people’s lives.”

Oregon House Bill 2797 would establish a mandatory minimum prison sentence of four to 10 years, and a maximum of 20 years, for anyone who manufactures or delivers illegal drugs that result in someone overdosing and dying.

It’s nicknamed “Taylor’s Law” after Taylor Martinek, a Portland man who died from an overdose in 2017, when he was 24. Martinek, who was addicted to opioids, had purchased what he believed to be OxyContin from a dealer. Only after Martinek died did police discover that the drugs he bought were laced with Fentanyl, a deadly synthetic opioid. The dealer who sold Martinek the Fentanyl was sentenced to 12 months of probation for unlawful delivery, prompting his family to call for new legislation that would impose harsher penalties on people who distribute drugs that lead to fatal overdoses.

Under current Oregon law, manufacturing or delivering illegal drugs that lead to an overdose death is considered a class C felony. While the maximum sentence for a class C felony is five years in prison, dealers are sometimes given only probation, depending on their previous criminal history.

Oregon’s deaths from opioid overdoses have dropped slightly in recent years, following a major opioid-related spike in 2011. But overdose deaths in the state still haven’t fallen to the pre-opioid crisis numbers. Overdoses from heroin and meth have climbed in the last several years.

Law-enforcement leaders are the most vocal supporters of HB 2797. Martinek’s father, Brian, is the former chief of police in Vancouver, Washington, and in March, representatives from the Multnomah County District Attorney’s office, along with several law enforcement officials from across the state, testified in favor of the legislation during a House Judiciary Committee hearing in March.

Jim Ferraris, chief of police in Woodburn, called the bill “a measure of accountability through mandatory minimum sentencing,” and said the law would largely be used to prosecute high-level dealers and manufacturers, rather than low-level sellers or people who share drugs with their friends, like John. (Under Oregon law, “delivery” of drugs refers to both selling and sharing.)

“This isn’t about a user, this isn’t about an addict,” Ferraris said at the hearing. “This is about people who sell dope on the backs of addicts to line their pockets and make money.”

Summer Anderson, a sergeant with the Hillsboro Police Department, suggested the harsher penalties could be used as a bargaining chip with low-level dealers. By tipping off police as to who supplied them the drugs, Anderson said, they could avoid prison time themselves.

“There’s no way to know where [drugs are] coming from without cooperation from the people who are selling it at the lowest level,” she said at the hearing.

Supporters of the bill also hope it could serve as a deterrent for black-market drug producers who cut their supply with Fentanyl.

“I want to deter the higher-level drug dealers who are moving the bad stuff down the chain,” Rep. Jeff Barker, who represents Aloha and is a chief sponsor of the bill, told the Mercury. “If this could save a few lives, then it’d be worth it to me.”

But that argument hasn’t swayed drug policy experts and criminal justice advocates, many of whom oppose HB 2797. That’s because, they say, the line between user and dealer is often blurry or nonexistent. Friends and family members often sell or share drugs amongst each other, while others might sell drugs to support their own addiction.

“Many of the dealers I know are also using and dependent,” says Haven Wheelock, who runs the syringe exchange program at Portland social services nonprofit Outside In. “And most of the dealers I know—it’s not about profit. It’s about survival, mostly, and they care about their community.”

John said he’d often buy $1,000 worth of heroin from his dealer so that he could get a lower price. Then he’d repackage the drug into smaller bundles, sell $1,000 worth at a higher rate and keep the rest for himself.

“Anybody that I’ve ever known that has been addicted has attempted to sell drugs on some level,” he says. “You’ll see in the movies sometimes, people who sell drugs that don’t use drugs. I never ran into any of those people.”

“As a community and as a state, we need to be looking toward, ‘What are the root causes of addiction? And how can we treat those root causes?’”

While supporters of HB 2797 say they don’t intend to use the bill to go after low-level dealers and people who share drugs, there’s currently no language in the bill that would prevent that from happening. Brent Weisberg, spokesperson for the Multnomah County District Attorney’s office, says that if the bill becomes law, prosecutors will have “legal and ethical discretion” when deciding how to use it.

HB 2797 bears a strong resemblance to laws in 20 states that treat overdose deaths as homicides committed by suppliers. Beginning in 2011, during the peak of the opioid crisis, many states—particularly Wisconsin, Ohio, Illinois, and Minnesota—started using those laws to prosecute people who shared illegal drugs.

The Drug Policy Alliance has used news reports to track such cases. In 2011, there were just 363 articles referencing drug-induced homicide charges; by 2016, that number had grown to 1,178.

Oregon’s HB 2797 would stop short of charging anyone with homicide, but Lindsay LaSalle, the director of public health law and policy at the Drug Policy Alliance, sees HB 2797 and other states’ laws as one and the same.

“Most of them are similar to Oregon, in that it’s imposing a penalty on someone for the death of a person as the result of an overdose,” she says. “The differences are pretty meaningless.”

Instead, such laws are largely used to imprison low-level dealers—who are often addicted themselves—and LaSalle argues there’s “zero evidence” such legislation is effective in reducing overdose deaths. In fact, she says, laws like HB 2797 could actually lead to more overdose deaths, because those who find themselves in situations like John’s might avoid seeking help for fear they could go to prison. A recent report from the Drug Policy Alliance cited several studies in which drug users said they had been reluctant to seek help during a companion’s overdose because of fear of the police.

Oregon is one of 40 states with a “911 Good Samaritan” law that grants some immunity to drug users who call 911 to report an overdose. But that law only protects people from possession, paraphernalia, and probation violations—not overdose death charges.

“How Good Samaritan laws work is, people have to trust them and believe them,” says Outside In’s Wheelock. “Most drug users will eventually call for help, but they’re going to put if off longer if they’re afraid of being arrested.”

These concerns were brought up during the March committee hearing. Supporters of the bill—including Martinek’s family—said they were open to retooling the legislation to eliminate the mandatory minimum sentence, grant immunity to those who seek help from first responders, and instruct law enforcement to only use it to prosecute high-level manufacturers and dealers. If lawmakers decide to rewrite the bill, it likely wouldn’t be passed this legislative session.

LaSalle says that while changing the language would reduce HB 2797’s potential harm, the bill is still flawed because it focuses on reducing drug supply rather than offering addiction prevention and treatment.

“It’s a terrible policy from the start,” she says. “We have [focused on supply] for 50 years, and the supply is more prolific and deadly and cheaper than it ever was before.”

Instead, LaSalle says, legislators should treat addiction like a public health issue. Oregon is making strides to do just that—Governor Kate Brown’s Opioid Epidemic Task Force, created in 2017 to address the opioid crisis, has won approval from local advocates like Wheelock. Wheelock is especially optimistic about one program it created, Project Nurture, which would provide concurrent prenatal care and addiction treatment to those who are pregnant.

“I don’t think a law enforcement solution is what we need,” says Wheelock. “There is no other medical condition in which law enforcement is considered a key stakeholder.... As a community and as a state, we need to be looking toward, ‘What are the root causes of addiction? And how can we treat those root causes?’”

During his period of drug use, John faced multiple possession and delivery charges. He spent what should have been his senior year of high school in an Oregon Youth Authority detention center, and once spent six months in jail awaiting trial.

He’s now studying criminal justice and criminology at Portland State University’s graduate school. He said he plans to work to curb legislation like HB 2797—which he says would put more addicted people in prison—and will support policies that connect drug users with services to stay safe and get clean.

“There’s a darkness that people experience with addiction that a lot of people don’t experience,” John says. “And when you come out of it, they’re a lot of good-spirited, bright, caring people that you don’t see in the general population. And they contribute good things to this world.” 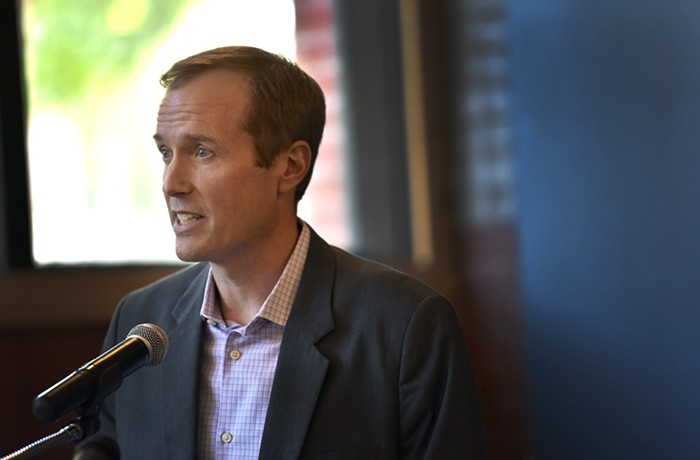