Portland's Lloyd District Ana_Penelope / Getty Images
As concerts, conventions, and sporting events rebound from the pandemic, the Portland Bureau of Transportation (PBOT) is looking to shift the way people travel to some of the city’s largest event venues.

The Lloyd district is home to three of Portland’s major venues: the Moda Center, the Oregon Memorial Coliseum, and the Oregon Convention Center. When all three venues have events on the same night, well over 10,000 people flock to the Lloyd neighborhood, causing traffic congestion and a major spike in demand for on-street parking. According to PBOT, the influx of drivers can also create unsafe pedestrian conditions because drivers are often distracted while circling blocks trying to find a cheap parking spot.

To address the congestion and safety concerns, PBOT is proposing a Lloyd Event Parking District that would increase the cost of on-street parking during major events in order to manage parking demand and incentivize the use of public transit.

“The primary goal of event parking is to use price as a tool to manage on-street parking and to set that price high enough to encourage event attendees to take public transit, bike, walk, or carpool to events rather than drive and park on the street,” Kathryn Doherty-Chapman, a PBOT parking operations manager, said during a Wednesday presentation to City Council.

Currently, the Lloyd district has approximately 1,895 on-street parking spaces. About 1,250 of those parking spaces are metered at $1 per hour until 6 pm and the rest are free. Because it’s cheaper to park in the Lloyd neighborhood for four hours ($4) than take public transit round trip ($5), PBOT parking officials believe that the current pricing system is incentivizing people to drive to the area early to snag a cheap parking space before their event. According to a 2021 study of parking in the Lloyd district, demand for on-street parking increased 136 percent on days when there were events at the district’s multiple venues compared to a non-event day. 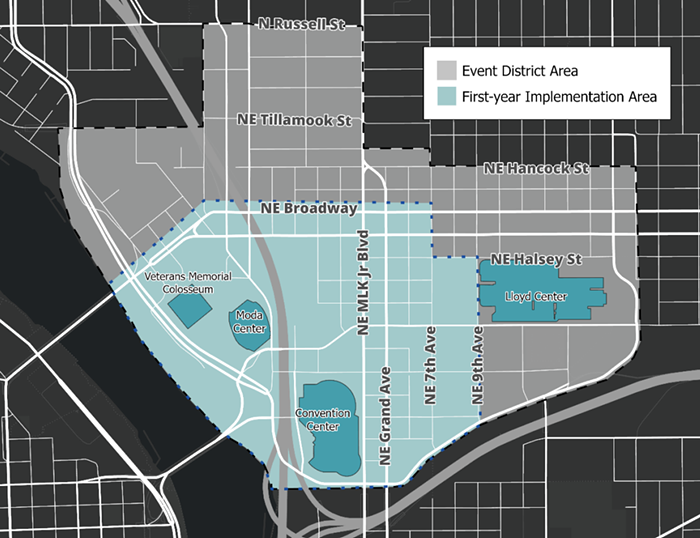 The proposed Lloyd Event Parking District area. PBOT
The Lloyd Event Parking District would seek to decrease parking demand and make transit a more attractive option by raising metered parking to $3 per hour from 5 pm to 10 pm on evenings when more than 10,000 people are expected to attend events in the area. During rare daytime events like Rose City Comic Con, the event pricing would be in place all day. A similar event parking district is in place around Providence Park in Southwest Portland.

The Lloyd district is accessible via five MAX lines, multiple bus routes, and the nearby Spring Water Corridor, as well as the planned Green Loop—a large bicycle and pedestrian pathway planned to connect the central city.

“The Lloyd has the best active transportation infrastructure in the city,” said Keith Jones, president of the Lloyd Community Association, during City Council testimony. “If Portland is serious about reducing our carbon emissions, this is a fantastic way to do so. If you give people incentives to use it, they will.”

According to PBOT’s proposal, implementing the new event parking program would not require any additional costs to the bureau and would raise an estimated $2,800 in additional revenue per event, or anywhere from $149,000 to $313,000 per year. That revenue would be used to create a program that mitigates the impact of the parking district on low-income residents in the Lloyd area. The neighborhood is home to two affordable housing apartment buildings that only offer on-street parking. PBOT plans to work with those residents to develop a low-income transportation wallet—a program that offers free transportation options like bus passes and rideshare credits to low-income Portlanders. PBOT would also conduct studies on the parking impacts of nearby neighborhoods just outside the event parking district to address any unintended consequences.

Portland city commissioners were receptive to PBOT’s proposal on Wednesday. Mayor Ted Wheeler praised PBOT and Commissioner Jo Ann Hardesty, who oversees the bureau, for developing a program that was approved by neighborhood stakeholders like business owners, residents, and community associations.

“My concern initially was what happens if we have transportation advocates and transportation planners on one side and businesses trying to recover from the economic slow-down related to COVID on the other, but that is clearly not the case here,” Wheeler said. “It appears there is a good overlay, the goals are in alignment, and I’m very pleased to see that.”

City Council will vote on whether or not to approve the Lloyd Event Parking District on April 20. If approved, the new pricing would start in September.