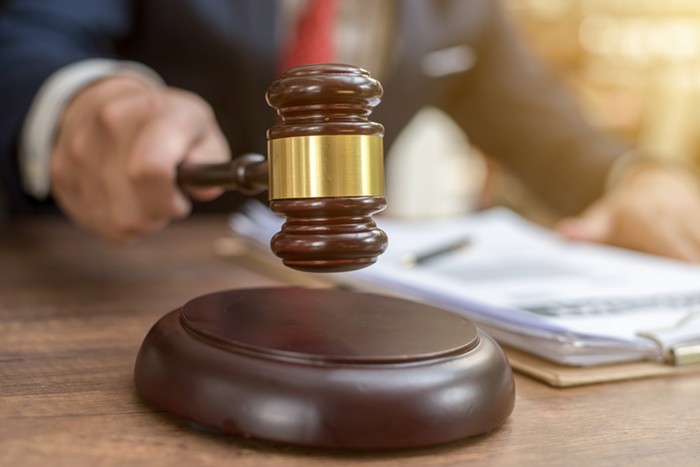 GETTY IMAGES / BOONCHAI WEDMAKAWAND
Four Oregonians are suing the state for failing to provide them with a defense attorney to represent them in their criminal cases. The four individuals each face criminal charges and cannot afford to hire an attorney, yet the state has not assigned them a public defender in a reasonable amount of time, as is constitutionally required.

The class action lawsuit places blame squarely on Governor Kate Brown and Stephen Singer, the director of Oregon's Office of Public Defense Services, which oversees and funds the state's contracts with public defense firms. The case estimates that there are at least 500 Oregonians currently without counsel, despite having already been charged with a crime.

The lawsuit demands the state refrain from prosecuting any low-income person with a crime if it cannot provide that person with a lawyer.

For those familiar with the current state of the public defense system in Oregon, this filing felt inevitable. According to a January 2022 report by the American Bar Association, Oregon only has 31 percent of the defense attorneys needed to represent criminal defendants who cannot afford their own. Because of this, public defenders' caseloads have ballooned, making hiring and retention even more difficult for public defender offices.

One of the named plaintiffs, a woman named Kpana Benjamin, was arrested on March 22 and was not provided a court-appointed attorney to represent her during multiple court appearances, despite being qualified for one. Because of this, Benjamin's case has been repeatedly delayed, which attorneys representing her argue conflicts with her constitutional right to a speedy trial. Another plaintiff, Maxwell Floyd, has been imprisoned since April 25 as he cannot afford bail—and he hasn't been assigned a public defender to help represent his needs.

"Mr. Floyd believes that his strong ties to the community and lack of any criminal history would make him eligible for a reduction in the security release amount, if he could get an attorney to present the information to a judge," the lawsuit reads.

The complaint also underscores the disproportionate impact that this representation crisis has on defendants of color. In 2019, 97 percent of Black defendants who were prosecuted in Multnomah County were represented by a public defender, compared to 91 percent of White defendants. And, according to OPDS' own data, 23 percent of the 83 people statewide waiting for a public defender on April 29, 2022 were Black, despite the fact that Black people make up less than 3 percent of Oregon’s population. Of the three complaints included in the lawsuit, one accuses the state of infringing on the Oregon Constitution's promise of equal privileges to all.

The individuals are represented in this lawsuit by a number of civil rights attorneys, including Oregon Justice Resource Center's Ben Haile and Alex Meggitt, Portland-area attorney Jesse Merrithew, and Jason Williamson, director of the Center on Race, Inequality, and the Law at NYU Law School.

In a media statement, Haile underscored that the lawsuit is not necessarily calling on the state to hire more public defenders, but to be more discerning with who it prosecutes.

"The State must take responsibility for how its decision to criminalize Oregonians en masse has strained its resources," Haile said. "District attorneys must also acknowledge their role in repeatedly opposing sensible reforms to our legal system.”