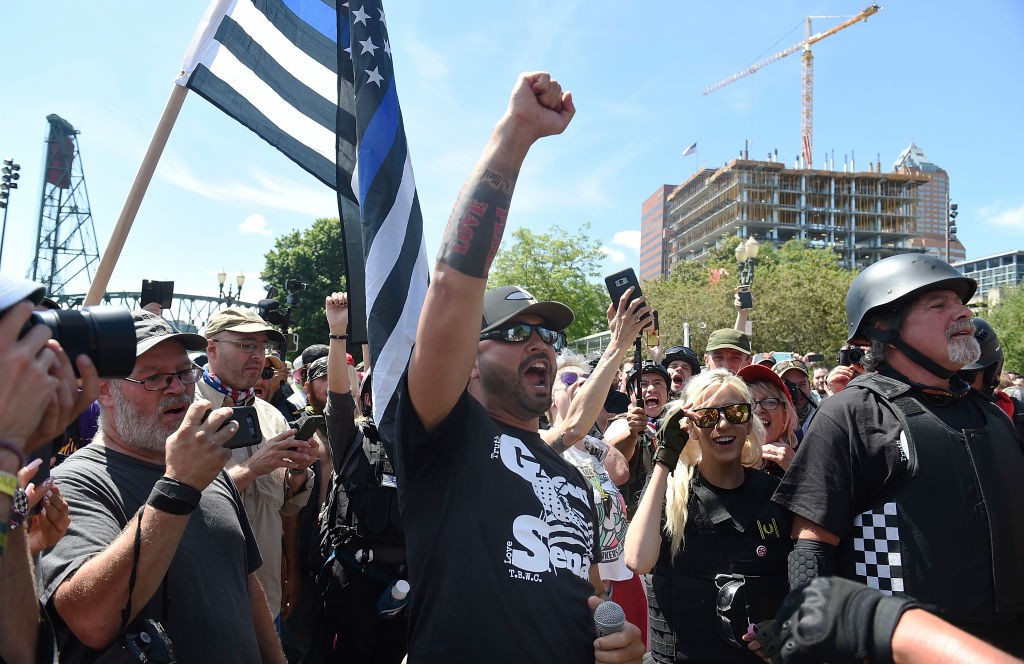 “On May 1, 2019, Portland had a heck of a day,” said Multnomah County deputy district attorney Brad Kalbaugh Monday morning, kicking off opening arguments in the long-awaited trial against three members of the right-wing activist group Patriot Prayer.

The case centers on a street brawl that took place the afternoon of May 1, 2019, outside the now-shuttered bar Cider Riot in Northeast Portland. The clash began after members of Patriot Prayer, led by founder Joey Gibson, approached Cider Riot’s patio, where anti-fascist activists were unwinding after a day of May Day marches. After throwing insults at each other, the two groups’ actions escalated into a physical fight on NE 8th, the street adjacent to the bar. The brawl ended after a Patriot Prayer member knocked a woman out cold by cracking a baton on her neck.

At question is whether or not three men involved in the brawl—Gibson, MacKenzie Lewis, and Russell Shultz—engaged in a riot outside the bar that afternoon. Oregon law defines riot as an act of a person in a group of five or more people “engaging in tumultuous and violent conduct.”

If convicted, the men face up to five years in prison.

On Monday, attorneys for the defendants made their case to the 14-person jury—composed of three men and 11 women—that their clients were all nonviolent observers at the event. In his opening argument, Gibson’s attorney Angus Lee explained that Gibson was simply expressing his right to publicly protest Cider Riot for being a gathering place for anti-fascist activists.

“Mr. Gibson was concerned about what that particular group of people was doing to the community,” said Lee. “He went there to call attention to the fact that this group was particularly violent and hateful. He didn’t punch anybody, he didn't assault anyone, he repeatedly told people to put their weapons away.”

Lee pointed to video clips of the full altercation taken by both Gibson and others present that showed Gibson telling other Patriot Prayer members to “de-escalate,” drop their weapons, and resist from assaulting other people.

“This isn’t a riot at all, this is a… strange protest,” said Lee, commenting on the video clips. “A bit of tomfoolery, essentially.”

Gibson is recorded appearing to goad the anti-fascist group at the start of the confrontation, shouting “Do something! Do something” at the crowd. Later on, he is heard yelling, mockingly, “Oh no, there’s a riot! There’s a riot at Cider Riot!”

Kalbaugh, the prosecutor, focused on one moment in the clash where two people—one from either group—appeared to engage in a consensual fight.

“You’ll see Mr. Shultz and Mr. Gibson not attempting to break up the fight, but to keep the violence going,” Kalbaugh said, after showing a video of the incident to the jury, “This is a video case about a street brawl. At the end of it… we will ask you to find these three individuals guilty of riot.”

Attorney Brian Schmonsees pointed out that his client Schultz never acted physically violent during the May 1 brawl.

“You’re going to see [Shultz] engage in de-escalation techniques throughout the video,” Schmonsees told the jury, prior to presenting video of the incident Monday. “There’s no evidence of him being violent. You’ll see he’s standing shoulder to shoulder with Mr. Gibson. That’s not criminal.”

Lewis’ lawyer Kelly Doyle offered little defense of his client, who was the only one of the three defendants who dressed like he was preparing for a fight on May 1—wearing a helmet and gloves to Cider Riot. Lewis also carried a large “Don’t Tread on Me” flag in his backpack the day of the altercation, but never used it as a weapon. Doyle spent his five minutes of opening arguments reminding the jurors that Lewis never used the flag as a weapon. He also warned against jurors being influenced by the name of the bar where the clash took place.

“We’re here because the name of the location where this occurred was a tavern called the Cider Riot,” said Doyle. “Do not let the name of this tavern influence you in any way to find my client guilty.”

Prosecutors questioned witnesses later Monday afternoon who helped paint the narrative that the defendants were engaging in violent conduct on May 1.

That included testimony from Heather Clark, the 34-year-old woman who was sent to the hospital with a vertebrae fracture after being hit by a baton. Clark was struck by a Patriot Prayer member named Ian Kramer who pleaded guilty to associated charges in May 2021. Kramer was sentenced to 20 months in jail and five years of probation.

Clark explained how she went to Cider Riot on May 1 to meet up with other anti-fascist activists, and wasn’t expecting any kind of violent confrontation. She said she confronted Gibson when he arrived with his group, and told him he wasn’t welcome—but he didn’t leave. She continued to urge the group of Patriot Prayer members to leave, until Kramer decided to strike Clark with his baton.

“I felt something hit the back of my neck and it immediately stunned me,” Clark told jurors. “An electric shock throughout my body. I became unconscious for a couple seconds. I honestly thought I had died.”

Prosecutors also questioned Justin Allen, a Vancouver man who had walked to Cider Riot with Patriot Prayer and filmed the entire clash. He had attended the event undercover, in an attempt to spotlight the actions of Gibson and other members of Patriot Prayer on his livestream recording. Defense attorneys accused Allen of being an ally of antifa and simply working to gather evidence against Gibson—but he rejected the classification.

“You were essentially working with the folks at Cider Riot,” pressed Schmonsees.

“I was not working with them,” Allen replied. The reason I went out was to show people in Vancouver what these [events] were actually like.”

County prosecutors did not finish questioning witnesses Monday, and will continue Tuesday morning. It’s not clear which individuals the defense attorneys intend to call as witnesses later in the trial.