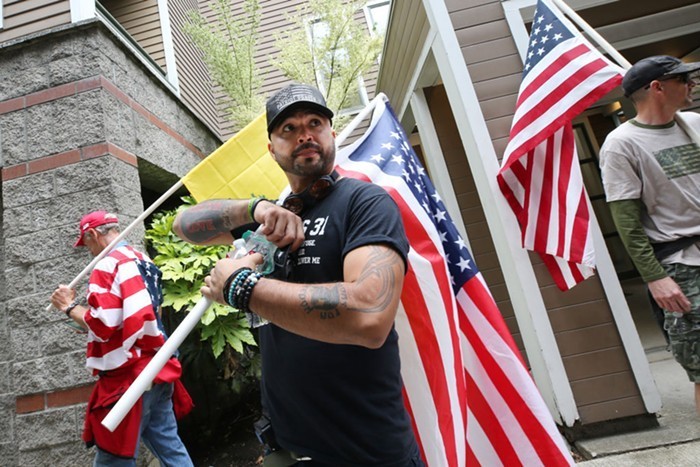 After numerous delays due to COVID-19 precautions, the May Day 2019 riot charges against members of the right-wing group Patriot Prayer—including ringleader Joey Gibson—are finally having their day in court.

Monday is the first day of jury selection for the joint trial, which questions whether Gibson, MacKenzie Lewis, and Russell Shultz engaged in a riot on May 1, 2019 outside of now-defunct Northeast Portland bar Cider Riot.

Since three years have passed since the street brawl, we could all use a refresher on the day's chaos.

To set the scene: Wednesday, May 1, 2019 started out like an average May Day in Portland, which is known for its historic May Day demonstrations advocating for workers' rights. The afternoon featured several rallies, led by local anti-fascist organizers, which remained peaceful and died out by 4 pm. After the demonstrations ended, anti-fascist activists decided to gather at Cider Riot on NE Couch and 8th to celebrate the day's work.

What was different about that Portland May Day, however, was that it took place in the midst of months of tense, frequent clashes between Portland anti-fascists and members of the Vancouver, WA based Patriot Prayer in Portland. It had become a pastime for Patriot Prayer and its associates—including members of the Proud Boys—to show up with threats and weapons whenever Portland leftists held a demonstration. May 1 was no different.

After learning of the meet-up at Cider Riot, Gibson led a group of Patriot Prayer members and far-right writer Andy Ngo to the bar. When the group reached the bar patio, they began throwing objects and pepper-spraying patrons from the street. The instigation eventually led to an all-out street brawl between the two groups, including fist fights and clouds of pepper spray. One Patriot Prayer member sent a woman to the hospital with a fractured vertebrae after cracking a baton on her neck. Police didn't arrive on the scene for an hour.

No arrests came until video documenting the lead-up to the brawl was shared with the Portland Police Bureau (PPB). This footage, taken by an anti-fascist man who had gone undercover to accompany Patriot Prayer to Cider Riot, appeared to be enough proof that the cadre of right-wing activists had planned the attack.

On August 22, 2019, a Multnomah County grand jury indicted Gibson and five other members of Patriot Prayer on felony charges for inciting a riot.

A court affidavit penned by Deputy District Attorney Brad Kalbaugh, who viewed the videos, describes scenes of the accused men "taunting and physically threatening members of the Antifa group in an effort clearly designed to provoke a physical altercation."

Three of the six—Ian Kramer, Chris Ponte, and Matthew Cooper—have since opted to plead guilty to the crimes instead of facing a jury trial. That leaves Gibson, Lewis, and Shultz left to face a jury on their shared felony riot charges. Their trial dates have been rescheduled numerous times over the past several years, due to the county courthouse's COVID-19 precautions.

Both Lewis and Schultz are being represented by court-appointed public defenders, while Gibson has retained legal representation from attorney James Buchal, the former head of the Multnomah County Republican Party. Buchal is also representing Gibson in the lawsuit filed by Cider Riot—which has been stalled in the Oregon appeals court for nearly two years.

In Oregon, riot is a "class C" felony, which carries the sentence of a maximum of five years in prison and/or a fine of as much as $125,000.

The court estimates jury selection to conclude by Thursday, July 14, with the first day of the trial kicking off the following morning.