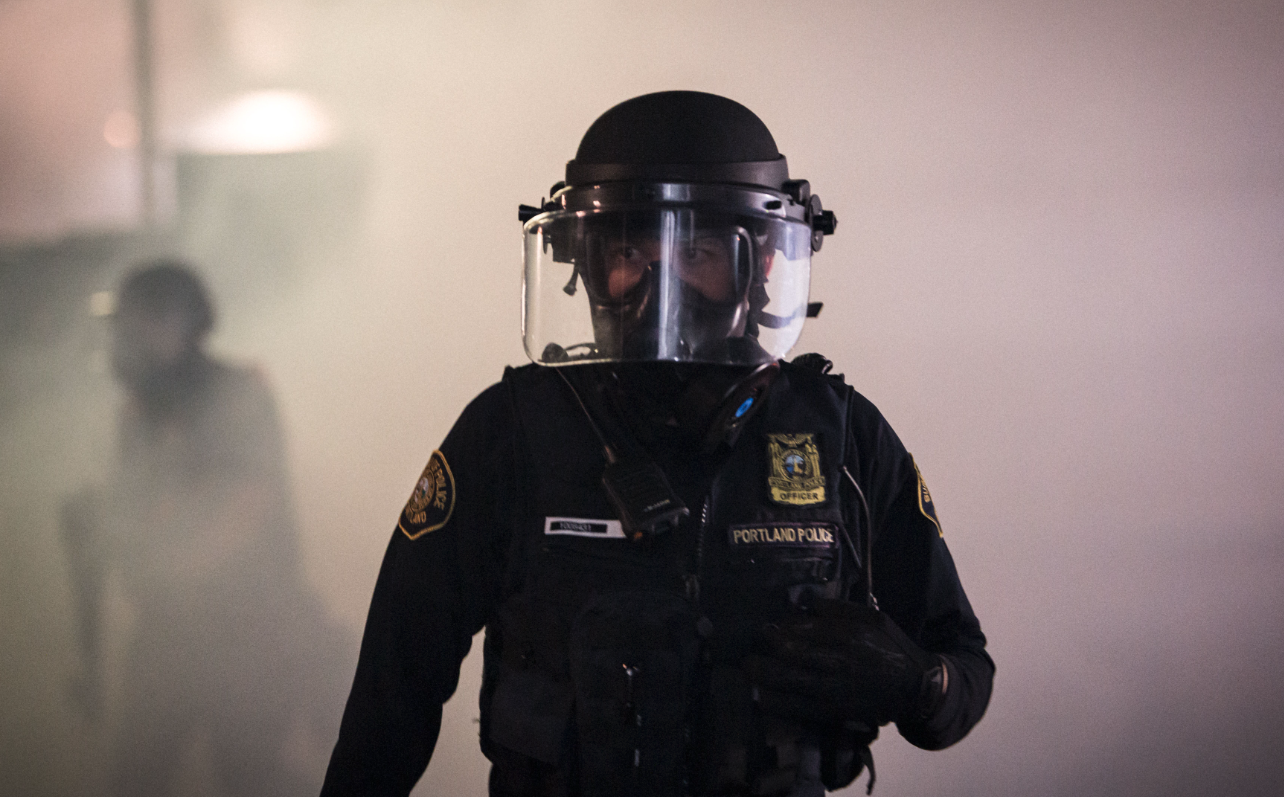 A PPB officer standing in a cloud of tear gas during a 2020 protest. MATHIEU LEWIS-ROLLAND

A jury has found the Portland Police Bureau (PPB) liable for battery and unreasonable force in an incident that left a 2020 racial justice protest attendee with a broken arm and Post-Traumatic Stress Disorder (PTSD). The jury chose not to find the bureau liable for assault, nor did they find PPB responsible for "negligent training" of its officers.

The trial centered on Erin Wenzel, a care coordinator at Oregon Health and Science University who attended a racial justice protest on August 14, 2020. Wenzel, who lives in Beaverton, attended the North Portland protest as a volunteer medic, wearing a red cross on her helmet to indicate the role.

Officers with the Portland Police Bureau (PPB) moved to disperse the protest shortly after dark, alleging that demonstrators were throwing objects at police. Wenzel said she was following police instructions to leave when an officer ran at her from behind and slammed her to the ground, breaking her arm and smashing her face onto the concrete. She said that after getting off the ground, she was jostled by a protester, causing her to fall into another officer—who then struck her in the leg with a baton. She fell to the ground again, skinning her knee. There was no video captured of this incident, nor any witnesses to support her claims.

Along with a broken arm, which caused her to miss work for several weeks, Wenzel was diagnosed with PTSD following the incident. Since the city was allegedly unable to identify the officer who hit her, Wenzel ended up suing the city of Portland in October 2020 for her assault by PPB officers, requesting $500,000 and a jury trial.

The finding of "battery" means that jurors agreed officers used excessive force against Wenzel. In civil law, "assault" describes a defendant who intended to cause harm to a plaintiff. Jurors' decision to not accuse PPB of assault indicates that they didn't believe officers meant to hurt Wenzel—even though they did injure her.

Although no officer was identified as being solely responsible for Wenzel's injuries, several PPB officers took the stand during the trial to explain how they're trained to respond to protests. Several seemed confused by the bureau's own use of force directives, and agreed that shoving a protester was acceptable if they were walking too slowly. Yet jurors didn't find PPB was responsible for negligent training of officers.

"Did [Wenzel] deserve to be violently shoved from behind... to be degraded and injured and humiliated and to be subjected to state violence with no resource and with no accountability?" Burgess asked. "I want you to ask yourself, 'What would make this right? What would justice look like?' The police do not police themselves. If you do not, no one will. We ask that you hold them accountable for their actions."

Over the course of the week-long trial, city attorneys painted Wenzel as an engaged member of the turbulent crowd, instead of the nonpartisan first aid provider she characterized herself as. During closing arguments Monday, city attorney Caroline Turco urged jurors that Wenzel was only involved in the case for the financial reward.

"Plaintiff is not here for accountability, she’s here for 500,000 dollars," said Turco. "Plaintiff should not be allowed to come into our neighborhoods, cause chaos, and collect money for it."

Wenzel's case is the first civil lawsuit against PPB regarding officers' treatment of protesters in 2020 to reach a jury. For defense attorneys and city lawyers alike, the results serve as an indicator on how numerous other similar cases will fare before a Multnomah County jury.

According to Juan Chavez, an attorney with the Oregon Justice Resource Center (OJRC) who is representing several people in lawsuits against PPB’s 2020 actions, the results of Wenzel's trial bodes well for future cases.

Chavez told the Mercury Tuesday that the $40,272 bill for the city gives defense attorneys "a yardstick where we didn't have one" when it comes to proposing damages costs to a jury or in settlement negotiations with the city in the future.

"That will be a type of anchor for us to use where there's no video and a comparable injury," said Chavez. "This is what we can point to when we’re negotiating. It's a net positive for the community. It takes brave plaintiffs to come forward to get to this point."

The verdict comes a day after a federal jury awarded a protester more than $1 million after she was injured by Salem police during a 2020 demonstration.