“I was expecting greater transparency by now." 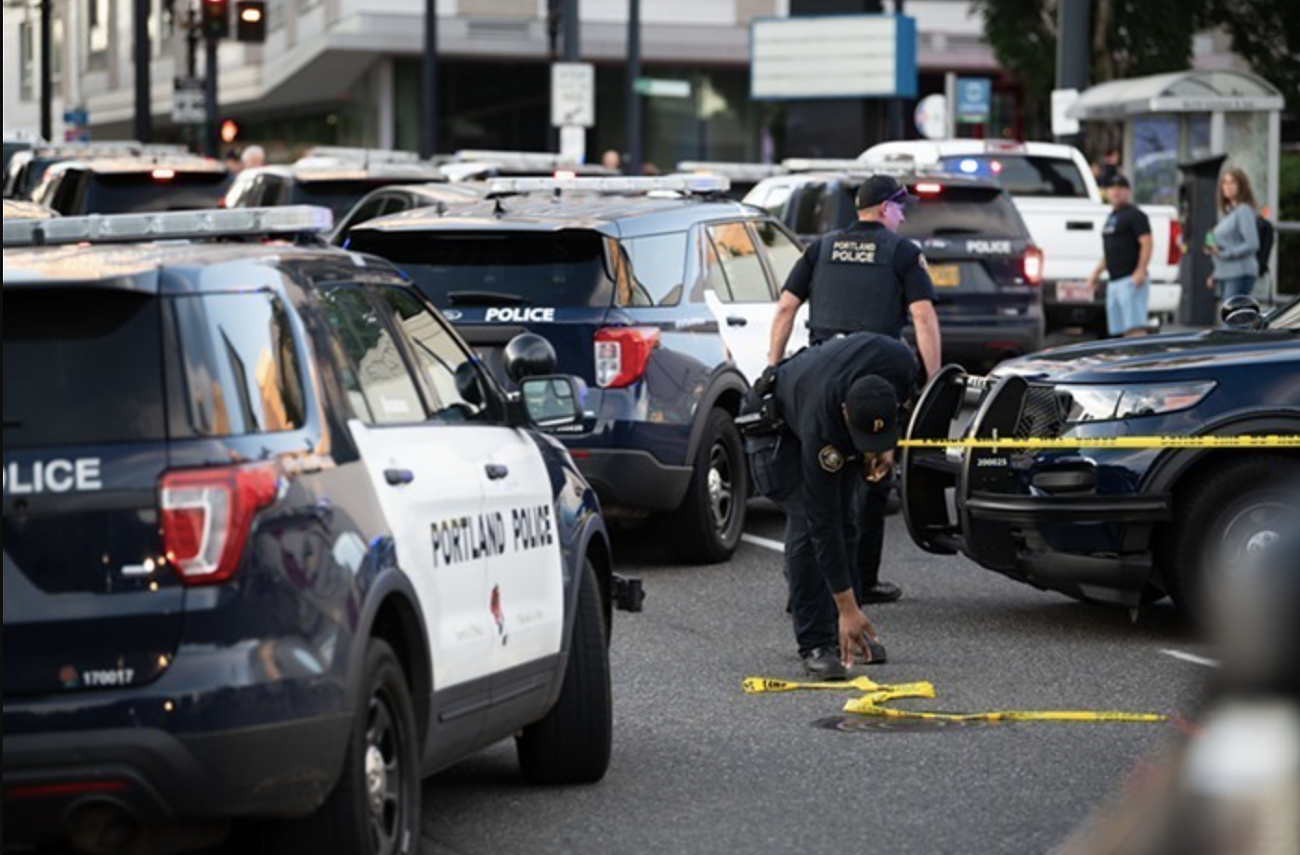 Portland police officers in Northeast Portland on June 24, 2021, shortly after a police officer fatally shot a member of the public MATHIEU LEWIS-ROLLAND

The city of Portland and the US Department of Justice (DOJ) were back in federal court Wednesday morning to provide an update on the city’s ongoing attempts to comply with a 2014 settlement agreement with the DOJ.

The agreement was reached after a federal investigation in 2012 found that Portland police had a practice of disproportionately using force against people experiencing a mental health crisis. The settlement agreement outlined a number of changes the city and its police force needed to meet to appease the DOJ, including new training requirements, policies around reporting when officers use force, and the creation of a community police oversight board. The city’s progress in meeting these requirements are outlined in frequent hearings before US District Court Judge Michael Simon.

After briefly meeting all the terms of the settlement agreement in 2019, police officers’ actions against racial justice demonstrators in 2020 reversed that momentum. The city has remained out of compliance with the agreement ever since. In April 2022, the DOJ and city agreed to amend the settlement agreement to add a section that would resolve those issues, including requirements to include a body worn camera policy, a new "dean of training" for PPB, and a new community oversight structure.

Six months later, and the city has yet to meet those requirements—and then some.

In September 2021, the city began an investigation into a slideshow created by the Portland Police Bureau (PPB) to train law enforcement which contained racist, unlawful, and politically biased information. The DOJ previously asked the city to release the results of this investigation. In a July hearing before Judge Simon, city attorneys pledged to quickly complete that investigation and address the other requirements set by the DOJ in April.

On Wednesday, Simon expressed his disappointment in the city for not yet meeting those goals.

“From the reports that I've read, I’ve seen some progress in some areas… but I don’t see progress in a few other significant areas and that does cause me concern,” said Simon.

He specifically pointed to the lack of clarity around the training slideshow investigation by the city, asking the city to share any steps they are planning to take to make sure similar presentations aren’t green-let by PPB leaders in the future.

“I must say that transparency is an important part of the solution for this problem,” said Simon. “I was expecting greater transparency by now. How did those slides get in there and what is being done to address that?”

City Attorney Robert Taylor said that the court and the public will have these answers once the investigation is complete. He did not give Simon an idea of when that would take place. Taylor did note that the captain of the PPB’s training division sent out a reminder to all PPB staff that all training materials must be reviewed by the division’s staff before being used in a presentation.

Chief Deputy City Attorney Heidi Brown agreed that she had wanted the negotiations to “be resolved by now.”

“I do think that the fact that we have a lot of agreement in most places is good,” Brown added.

PPA’s attorney Anil Karia echoed Brown, noting that the union is “doing everything in our power to balance our interests and find common ground” with the city.

Members of Portland City Council and their staff are allowed to participate in labor negotiation discussions with the PPA. In her comments to Simon, City Commissioner Jo Ann Hardesty underscored that the slowdown in body camera negotiations has centered on a disagreement about when officers should be allowed to view camera footage after using force against a member of the public. Specifically, PPA wants to allow its officers to be able to view their camera footage before writing an official report about the incident.

“No one should get to see that video footage prior to that report being written,” said Hardesty. I’m hopeful we’ll declare an impasse and move forward.”

Simon echoed her statement, noting that the two parties have met at least 13 times to hash out a policy.

“Thirteen meetings should be enough to know if we can reach an agreement,” he said.

Simon offered his court’s help in expediting negotiations and the slideshow investigation. He also urged both the city and the DOJ to consider requesting a court-appointed monitor to pick up the pace of the entire settlement agreemen’s goals. A monitor could help keep momentum going to get the city in compliance with the settlement outside of the occasional updates in Simon’s courtroom. The idea was first suggested in April. Since then, both the DOJ and city attorneys have met to discuss the possibility. Yet they did not ask for a court monitor Wednesday.

Karia with the PPA did point out that appointing a monitor to the case may drag out the settlement agreement process even further. In response, Simon reminded the courtroom that when the city was first sued by the DOJ in 2012 for its police officers’ actions, the court estimated it would take the city about five years to fully address the issues raised.

“So yes, a court appointed monitor would be a sizable change,” said Simon. “But given that we haven't achieved substantial compliance [in ten years], maybe it's time for a change.”

Simon can’t appoint a court monitor without a formal request from one of the parties involved in the settlement agreement.

Simon heard from multiple members of the public, including those named as amici (or “friends of the court”) in the legal settlement. Speakers focused on the current shortcomings of the community-led police oversight work and the fact that PPB officers continue to use force against mentally ill people in Portland.

The independent community oversight work mandated by the settlement agreement is led by the Portland Commission on Community-Engaged Policing (PCCEP). In March, staff resignations forced the city to stop holding PCCEP meetings for the group’s subcommittees, where members propose policy recommendations and hear from specific communities impacted by policing. Mayor Ted Wheeler, whose office oversees PCCEP, promised to bring subcommittee meetings back once the city had hired new people to staff the committee meetings.

Those new staffers were hired by Wheeler’s office in July—but subcommittees have yet to return. According to PCCEP member Ann Campbell, the lack of subcommittee meetings is just one of the serious problems the group has encountered under new staffing. Since new staff were hired, Campbell explained, PCCEP members are no longer allowed to set their own meeting agendas or even preside over meetings. Those duties have been assigned to Wheeler’s staff.

“Since last March, we have had a lack of support to do our work independently,” Campbell told Simon Wednesday. “It is my observation that the city has effectively stopped the work of PCCEP so it can direct and manage the work of PCCEP.”

Simon appeared startled by this update. He was also concerned by PPB data presented by the Mental Health Alliance (MHA) that illustrated how police use of force against people with a mental illness has appeared to worsen since the city first entered the settlement agreement.

“Despite a steady decline in police dispatches overall, force-incidents during a mental crisis have not declined, even though force incidents have declined for all other groups,” reads a court filing submitted by the MHA. The group’s data, compiled with retired scientific researcher Jonathan Brown, also found that the intensity of police force used against mentally ill Portlanders has increased over the past five years.

Attorneys with the MHA and representatives from the Albina Ministerial Alliance—two amici in the case—also expressed their frustration with how slow the city’s process has been to address its shortcomings within the settlement requirements.

“The city cannot be rewarded with four more months for successfully hiding the ball before these hearings,” wrote Juan Chavez, attorney for the MHA, in an update filed with the court. “If the city ever meets its obligations to report to the court an update on its body worn camera policy, or the status of its investigation into the training slide, we request that the court convenes an expedited hearing on these matters and allow for public testimony.”

The city, DOJ, and other involved parties are scheduled to present yet another update to Simon on February 28, 2023.