The latest report on the first response team exposes weak spots in the rapidly expanding program. 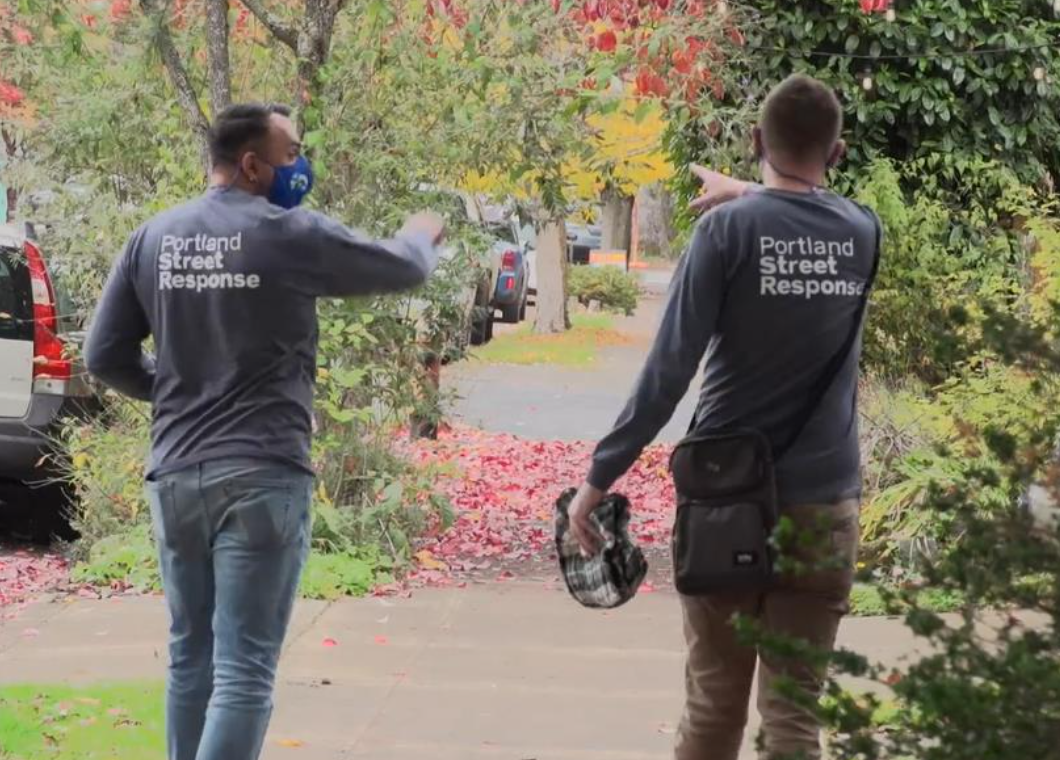 PSR staff responding to a call in east Portland. City of portland

Portland Street Response (PSR) has experienced a surge in demand following the first response team's citywide expansion in April 2022. In the six-month window following the expansion, PSR workers responded to 717 percent more calls than they did during the same time period in 2021, according to a Portland State University study released Thursday.

While the demand following the expansion illustrates the city's clear need for the alternative emergency response program, it also exposed cracks in PSR's quickly-expanding facade.

The city has commissioned PSU Homeless Research & Action Collaborative researchers to deliver a progress report on the measured successes and shortcomings of PSR every six months since the first responder's pilot program kicked off in February 2021. At the previous two check-ins, however, researchers have only been able to share findings from PSR pilot programs limited by geography. Thursday's report is the first to reflect how the team operates at its intended capacity—expanding from 36 to 145 square miles.

Researchers point to the city's challenges recruiting, hiring, and onboarding new PSR staff to keep up with demand as one of the program's biggest obstacles.

"Staffing shortages were arguably the biggest challenge during the first six months," reads the PSU report. "These staffing shortages led to delayed response time, increases in the number of cancelled calls, reductions in the number of calls diverted from other responders, frustration among community members calling to request PSR’s services, and stress and burnout among staff members."

Because of staff shortages, PSR was forced to adhere to a call system that capped the amount of calls on hold awaiting their response to five—instructing 911 call operators to direct any additional calls that PSR would normally respond to to other first response agencies, like police or fire.

PSR teams are made up of behavioral health workers and emergency medical responders, and are dispatched to 911 calls that involve individuals who are experiencing a mental health crisis, are intoxicated, or drug affected. Staff also respond to situations often referred to as "welfare checks," where someone calls 911 to report that an individual is outside and yelling or unresponsive on the ground. The teams currently operates from 8 am to 10 pm every day.

According to the PSU report, the program has finally staffed up to fill its intended 58 full time positions.

"However," the report warns, "the challenges experienced during this evaluation phase should stand as a reminder of the importance of ensuring that there are adequate full-time staff or on-call staff available at all times to meet the ever-increasing demands of Portland Street Response."

The PSR team is set to expand to a 24/7 schedule in the coming weeks.

Apart from an uptick in demand, the PSU report identified several other changes in the first response team's work over the past six months. Between April and September, only 5 percent of calls PSR responded to required a co-response, meaning that staff with PPB, Portland Fire and Rescue, or another emergency service were needed to assist PSR staff. In the first year of the program, 10 percent of all PSR calls required a co-response.

PSR staff were also able to address the majority of their calls in the field, only having to send an individual to a hospital for additional care just over 1 percent of the time. In PSR's first year, workers sent clients to the hospital more than 3 precent of the time.

The six-month period also saw doubled response times from PSR teams. In the programs' first year, responders were able to arrive on a scene within 14 minutes. Between April and September, PSR arrived within 28 minutes on average. The report notes that, during that same time period, the average time for PPB to respond to a welfare check call was just over 51 minutes.

PSU researchers base both this measured decrease and PSR's heightened response time on staffing shortages and the much larger geographic area the team covers.

“The biggest struggle continues to be the culture clash between PSR... and Fire Bureau culture," one PSR staffer told researchers. "Honestly, on a weekly basis, there’s something that comes up that’s just upsetting to people on the PSR team because it doesn’t make sense in our field."

Fire Bureau staff confirmed this mismatch, telling researches that they were annoyed with how PSR staff often call out instances of perceived misogyny, racism, and transphobia coming from firefighters.

"If I accidentally mis-gendered you, a PSR person would just be on me like, 'Oh, you can't do that. That's so bad. You're such a bad person,'" a Fire Bureau employee told PSU researchers. "They're just so into this Portland woke culture that they've already made a name for themselves within our fire group of, 'Hey, watch out for the PSR people, because they're looking to break somebody off for saying something wrong, for not treating a homeless person that's covered in feces super perfect.'"

The PSU report concludes that housing PSR within the Fire Bureau "legitimizes Portland Street Response as a core part of the city’s first responder system," but the fraught relationship between the two factors needs to be addressed through equity training.

The report identifies continued frustration with 911 operators inability to dispatch PSR to certain calls that could benefit from the team's expertise. PSR workers are currently restricted from responding to calls where a person is reported to be carrying a weapon, is acting "violent toward others," is obstructing traffic, is reportedly suicidal, or is located inside a private residence.

Police expressed their annoyance with this limitation to PSU researchers.

"It's unfortunate that we're limiting PSR. They can't go to someone's house. I wish that they could," said one officer. Another complained that PSR staff were only able to step into the street to assist someone if an officer was standing beside them.

City staff have spent months meeting with the PPA to lift these prohibitions, but have yet to reach a conclusion.

PSU researchers were initially scheduled to present the findings of this status report to City Council on December 6. However, that meeting has been indefinitely postponed—and isn't expected to take place before the end of the year. Commissioners were all sent copies of the report this week to inform future council discussions.

"This most recent phase of the Portland Street Response program evaluation makes clear that the program is very much still in the expansion, adaptation, and learning phase," the report concludes. "This is not surprising nor alarming."