A Note from the Mercury’s Editor: Eyes and Hearts 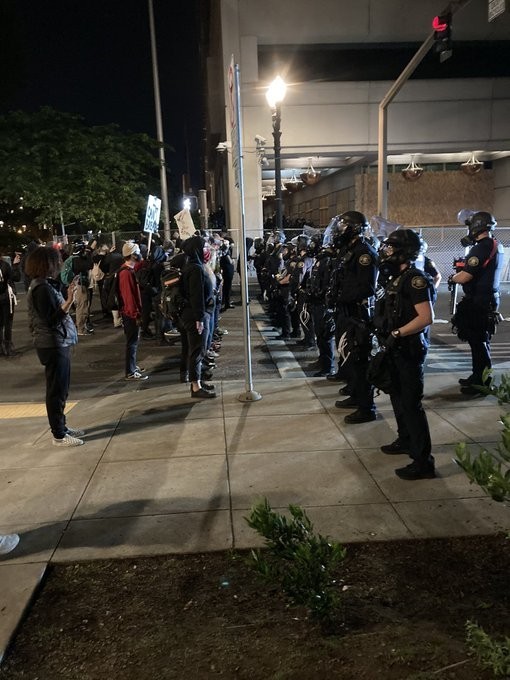 Last night was Sunday, May 31, and I along with a couple thousand others were out on the street in front of the Multnomah County Justice Center. I was covering the rally to remember George Floyd and end police brutality, because a) sure, that’s my job, b) our small staff is severely overworked, and c) I’m in the give-a-crap club. I’ve adored Portland from the moment I arrived, and while our current hellscape seems to be inexplicably getting even worse, being out there with you last night reminded me how much I adore you.

Look, I know how the media can misrepresent protests—and while the Mercury tries to avoid it, even we fall into time-worn traps of focusing on the result of destruction (broken windows, looting) rather than the cause (economic and racial disparity, an unnecessarily-militarized police force). So I want to take a moment to describe something I saw last night that doesn’t fall into that narrative.

It was around 11:30 pm, and I (and at least a thousand more) had been gassed, flash-banged, and chased around the downtown corridor for hours. We had returned to the Justice Center, and the crowd was overwhelmingly polite. In fact, every single time I saw someone act out—trying to distribute fireworks, toss water bottles at cops—they were immediately shut down by fellow protesters.

In any case, late in the evening something happened that made the cops nervous, and once again flash bangs flew, and tear gas filled the air. The majority of the crowd was forced back into the downtown area, though one small group didn’t move. They were nose-to-nose with a line of riot cops on the south side of the building, just out of distance from the gas. I didn’t run, because they didn’t.

I really didn’t expect what I saw—a line of protesters calmly talking to the cops and each other. “We are peaceful.” “Remember the name of George Floyd.” “It’s okay—you don’t need those riot suits.” “We’re here to honor and protect people of color.”

When new people wandered up, they were immediately told that this space was peaceful—this tiny oasis of calm as gas hovered in the air, and police sirens blared—and anyone who intended to cause trouble was not welcome. And for the first time all evening, I felt safe. Even while I was six feet away from a riot cop’s baton.

That's when a cop car suddenly sped by, loudspeaker blaring. “This is an unlawful demonstration….” Our heads jerked around and suddenly the tension ratcheted up tenfold. Looking at the faces of these unarmed protesters who were mere inches away from a line of police dressed in military gear, I was reminded that for too many people in this nation, the feeling of safety—that I as a white person take for granted—is an illusion.

And yet these words pulled us back in. “We are de-escalating.” “We are peaceful.” “George Floyd.” “Breonna Taylor.” “Ahmaud Arbery.” "We're united."

It was reverential. It was certainly as close to being in church as I can remember, even as it felt like the world around us was crumbling.

There were a lot of scenes like this last night—of people passing out water, picking up trash, offering emotional support, helping wash tear gas out of the eyes of a Mercury reporter. These are important stories to share, and to do that, we need eyes on the street and especially your support.

Due to the COVID pandemic, we were forced to lay off the majority of our staff, including editorial members that we adore and who would’ve happily helped us cover the protests over the past few days. Currently we have the staff that we can afford, and to be honest, after working nearly 30 hours over the past weekend alone, we’re tired. Tired, but undaunted, because that’s our job: We want you to see what we see.

You can help keep our eyes and hearts on the street, and hopefully allow us to get more help in the future, by making monthly donations to the Mercury if you are able. We certainly appreciate all the help you’ve given us thus far, and trust me when I say not a penny has gone to waste.

Please take care of yourselves—especially now—and if you can, join those who practice de-escalation and the protection of those who need it most. We’ll be looking out for you, too.

If I Ever Run for Governor, Please Don't Vote for Me