I'm on the scene, keep checking back for updates!

1:17 pm. I'm huddled with a few reporters at Waterfront Park, waiting for the crew from Convergence for Climate Action to set up some street theater--something involving long bamboo poles, cutouts of cars, and lots of anti-bridge posters--and to pull the trigger on a bigger act of civil disobedience (hint: cops are hovering, and I don't doubt someone's going to get arrested). 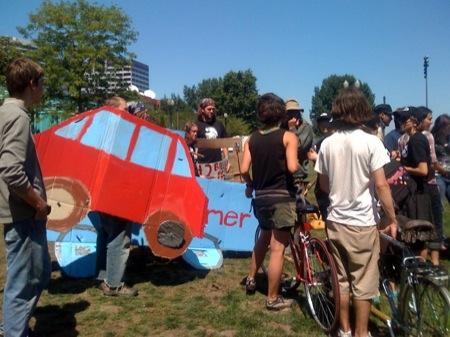 UPDATE 2:35 pm! A "climate activist" is currently suspending herself from the Morrison bridge and is getting ready to unfurl a banner. Read the activists' press release after the jump! (We mean the blog jump, not the activist... you know what we mean.)
Stay tuned for the latest, with pictures forthcoming!

UPDATE 3:05 pm! The protester is in position and has unfurled her banner. Firefighters and cops everywhere... Fire rescue is the water and looking ready to rappel from the bridge deck.

UPDATE 3:20 pm! That was a short protest. The cops offered Maya Smeloff the chance to avoid arrest and a night in jail if she'd come down. After yelling over the water with her cohorts, Smeloff agreed to climb down--but she left her banner behind. A trio of firefighters in mountain climbing gear scrambled up the bridge trusses to remove the sign.

As Smeloff and the other guy who assisted in the protest--he blocked the maintenance access to the bridge--were being written up, the crowd moved on, to the NW Natural building a few blocks away. There, three woman have "occupied the headquarters of NW Natural Gas Co. in Portland to protest the company's involvement in Liquefied Natural Gas development (LNG). The climate activists have locked themselves to each other in a circle, blockading the entrance to the building providing an opportunity for interaction with the growing crowd."

Brian Sloan, one of the spokespeople for today's actions, noted that these two events were just a warm up, for bigger climate-related action yet to come in the next few days. (P.S. - I asked why they climbed the Morrison Bridge instead of, say, the I-5 bridge. "More charges," he said; the Interstate bridge is state property. 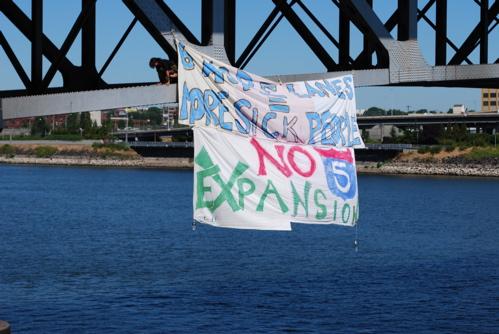 Portland -- At approximately 2 p.m. today two activists with the Convergence for Climate Action walked onto Morrison Bridge and unfurled a banner protesting the Interstate 5 expansion known as the Columbia River Crossing. One activist is now suspended from the bridge and one has locked himself to the bridge. The banner reads "Six more lanes equal more sick people -- No I-5 Bridge Expansion." The Portland Police Department is on the scene. The bridge activists are supported by a politically charged street theater performance depicting the expanded bridge, cars, and bikes. Representatives of the Oil Enforcement Agency will be handing out tickets to passersby.

Activists are drawing attention to the proposed Interstate 5 expansion and Columbia River Crossing (CRC) project because of concerns about the climate impacts as well as the continued reliance on oil-based transportation infrastructure at a time when oil supplies are falling and prices are rising dramatically. Opponents of the project point out that the state of Oregon has stated a goal of reducing global warming pollution to at least 75% below 1990 levels( ), with transportation-caused global warming pollution responsible for 1/3 of regional global warming pollution( ). Public health advocates at the hearing point out that the I-5 freeway has already had a negative impact on the health of low-income communities and communities of color along the freeway and that increased driving would lead to further pollution. Finally, homeowners are up in arms about the possibility of their property being seized through imminent domain to make way for an expanded highway.

In addition, residents are concerned about the impact on communities which surround the proposed expansion. "Low income neighborhoods in North Portland already have asthma rates triple the national average," says Tim Brown, the second activist and a Portland resident. "The business community will benefit from the highway expansion at the expense of public health and the climate."

Abernathy and Brown will stay on the bridge until removed by police. Updated information and photos are available through the contacts above. The West Coast Convergence for Climate Action has planned additional actions throughout the day. The West Coast Convergence for Climate Action is part of an international network of climate "camps" which began in the summer of 2005. Seven climate-focused convergences are taking place throughout July and August in Oregon, New York, Virginia, Canada, the United Kingdom, Australia, and Germany.

Comments 11
Tags: Politics Blogs
If you enjoy articles like this, please help the Mercury continue our mission of providing up-to-the-minute information, progressive journalism, and fun things to do in Portland by making a small recurring monthly contribution. Never forget: Your help is essential and very much appreciated!
CONTRIBUTE NOW